Today's trip was a private charter for two classes from Duke Marine Lab in Beaufort, NC, located a little bit down the coast from us.  One course focuses on marine mammals and seabirds while the other's focus is primarily sea turtles, four of which we had aboard to release, courtesy of the aquarium at Pine Knoll Shores.  The weather was absolutely perfect for a boat mostly full of novices, so with light winds from the north, we headed offshore in calm conditions with the recently full moon setting in the morning sky! 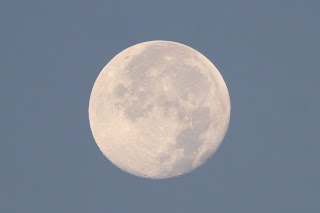 Sargassum (a type of brown algae pictured below) has been noticeably absent on our trips so far this summer, but not today!  There was a nice grassline right off the bat before 1000 and we stopped to sample some finding a few shrimp, some swimming crabs, a filefish, and a sargassum fish (Histrio histrio)! 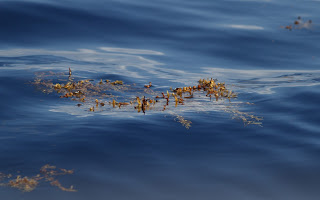 Just as we finished up with that, a boat ahead of us radioed Brian to tell him they had a tropicbird overhead - we headed that way as some dolphins surfaced behind us.  We decided to come back for the dolphins and see if we could get a look at a tropicbird - and while they did not come close to us, there were THREE White-tailed Tropicbirds flying together ahead!  This is the third out of five trips this month that has found White-tailed Tropicbird - pretty nice ratio to start the summer!  Then back to the dolphins, some offshore Bottlenose, that put on quite a lazy show swimming along beside the boat and under the bow for some time.  There were at least two young ones in this group and one was spyhopping to check us out! 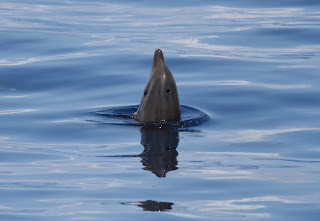 Over the edge of the shelf we released three Loggerheads and a Green Turtle (photo below), it was amazing to see them take to the Gulf Stream and go - each heading its own direction in its own way! 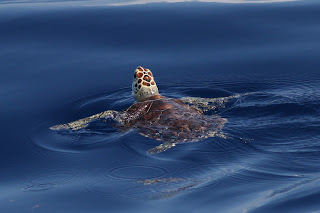 Later in the day Brian spotted a large adult Loggerhead that obligingly swam towards the boat, lifting its head from the water multiple times to our delight! 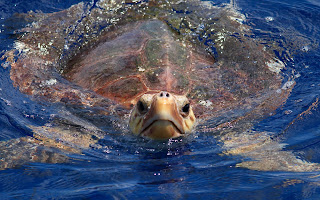 The birds were no disappointment either with a total of 10 pelagic species for the day.  Due to the light winds, Black-capped Petrels looked a little lazy flying by and no one was really very interested in the chum except a handful of Wilson's Storm-Petrels.  We were able to find a dark morph Pomarine Jaeger near the tropicbirds, possibly explaining why we did not have a close visit from them...and we turned up one Band-rumped Storm-Petrel sitting on the water with some Black-cappeds and a Great Shearwater.  Otherwise the stars of the day, right behind the tropicbirds (& the charismatic megafauna), were a couple of Sooty Terns!  So while it was a little slow at times, as is often the case when the seas are comfortable for humans, it was an amazing day out there! 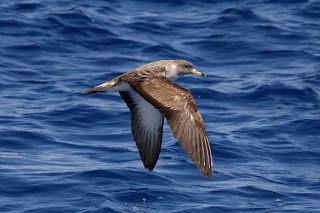 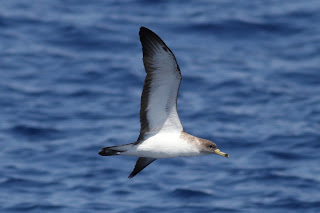 Audubon's Shearwaters were very cooperative today, allowing close approach when they were sitting on the water! 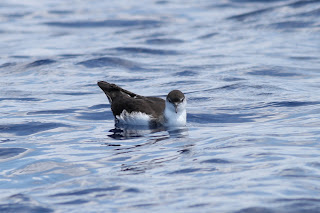 A couple of Bridled Tern images: 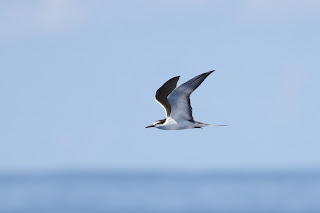 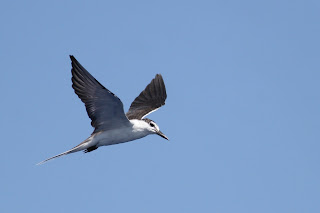 & the Bottlenose Dolphins were so incredible to photograph today!  The calm seas made it easy to follow & capture them when emerging! 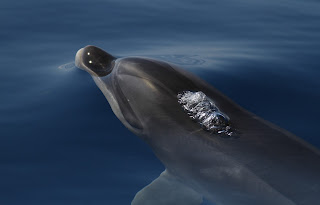 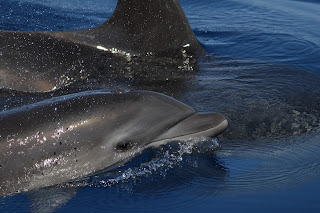 Posted by Kate Sutherland at 11:33 PM