A perfect sunrise was our backdrop as we headed to Hatteras Inlet this morning in light, westerly winds.  Quite a contrast to yesterday when it was blowing and choppy!  There was a little swell as we headed offshore and like yesterday, it was not very birdy on our way to the edge of the shelf.  Once we slowed down though, it was not long before Nick Bonomo spotted a beehive a short distance ahead!  Beehives are the backbone of summer pelagic trips here, anything is possible and you just never know what might pop in.  Last year on May 25, we found a Bermuda Petrel with an early spring beehive - a bird that stayed with the feeding group (and us) for almost 45 minutes!  So to begin the day with one of these dome shaped feeding flocks of shearwaters and petrels...well, it felt like summer might really be here!  This group of almost 200 birds was comprised mostly of Cory's & Great Shearwaters (photo by Kate Sutherland) 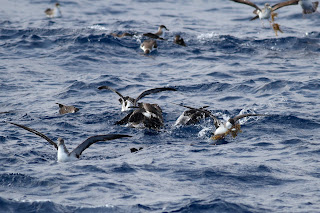 with some Audubon's, a couple of Black-capped Petrels on the periphery, and the star of the day: a Manx Shearwater!  We stayed with these birds for almost an hour and at one point the Manx was on the water right under the bow (photo by Nick Bonomo)!! 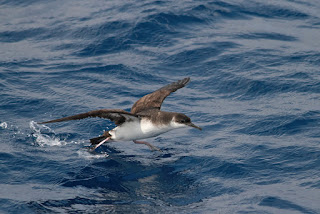 Even a couple of Royal Terns came in to check out the activity!  By 1000 the wind had shifted to the north & picked up a bit - our slick was a magnet for Band-rumped Storm-Petrels (photo by Nick Bonomo) and Black-capped Petrels, and of course, some Wilson's Storm-Petrels! 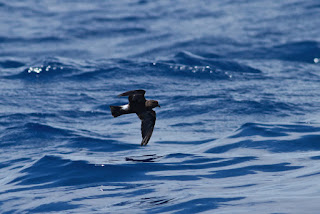 With the wind the Black-cappeds were fearless, buzzing by the stern as they dropped to the slick to feed on some delicious fish - they were not interested in the dead, previously frozen, squid I tried feeding them (photo by Kate Sutherland). 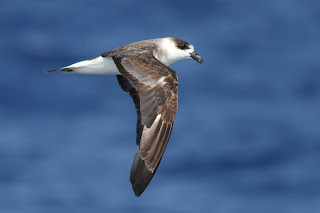 As we neared the shelf break after 1:30 in the afternoon, there was a flight line of shearwaters moving across the bow - temperature break?  Some type of change, or condition?  As we neared these shearwaters and looked to the left, a beehive was forming right there!  Brian ran into the current to catch up with the small swarm that was growing by the minute, birds streaming in...  Soon we found ourselves in our second beehive of the day, this one was majority Great Shearwaters with Cory's, a few Audubon's, Wilson's, a Black-capped plus a bonus Band-rumped!  While we see many beehives over the course of a summer in the Gulf Stream, this was unique because we were there for the beginning.  We did not see what it was that the birds were chasing, but did see some of them scampering after Atlantic Patchwings and Oddspot Midgets!  Another amazing adventure in the beautiful blue waters of the Gulf Stream!  Thanks to Nick Bonomo for helping to lead the trip (and recruiting our only participants to attend both trips!) and thank you again to everyone who joined us out there!  Next weekend is booked, but we have space on the rest of our trips this summer - July 15, 16, 29, & 30 and August 5, 6, 12, 13, 26, 27, & 28!

The Black-capped show today was incredible!  (photo by Nick Bonomo) 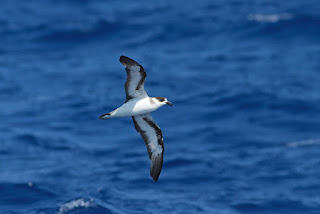 It was really nice to have time to compare the Manx Shearwater (top) and Audubon's (bottom) (photos by Nick Bonomo): 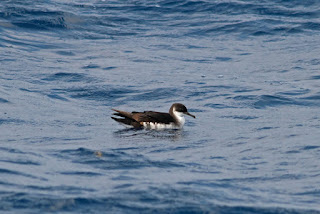 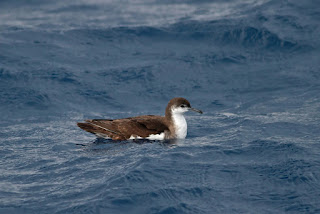 Here is a photo of an Audubon's with a small fish at the first beehive...(photo by Kate Sutherland) 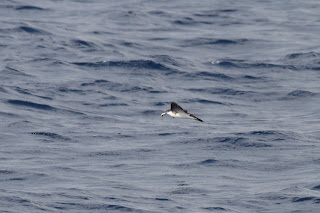 We did not have huge numbers of Wilson's Storm-Petrels today, but they were cooperative in the slick!  (photo by Kate Sutherland) 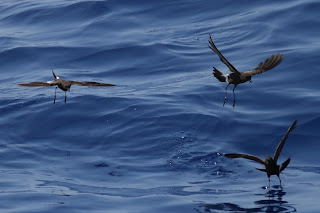 & the Band-rupmeds came quite close over the course of the day as well!  (photos by Kate Sutherland) 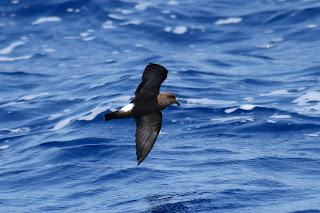 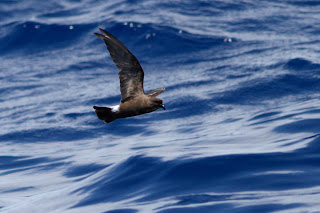