Showers and thunderstorms were offshore with us again today, but the seas were quite calm compared to the last few!  We got an early start, but the birds were not very active this morning as has been the case the last couple of days.  A skua flew by just outside of the inlet, close enough for nice views, and a group of Red-necked Phalaropes flew across the bow.  We were treated to a gorgeous rainbow when we slowed just over the edge of the shelf (photo by Doug Gochfeld). 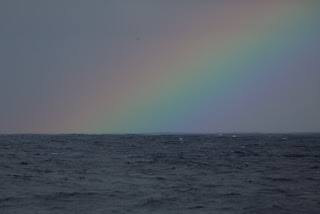 Wilson's were slow to gather with less than ten individuals until well after 0900, then things started to pick up...a little!  A Leach's Storm-Petrel flew by, then a Black-capped Petrel, and soon we had a Pomarine Jaeger following, it just took some time!  A quick drift produced nice views of the Leach's and Band-rumped Storm-Petrels and just before 1100 the shout of "tropicbird!!" went out on deck!  Sure enough, a curious White-tailed flew in to check us out (photo by Doug Gochfeld), 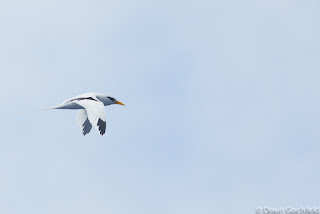 stayed for just a minute, and then took off to parts unknown.  Some days it pays off to get out to the deep and we were there!  Worth noting that we had a Red-billed Tropicbird last Tuesday, prompting Brian's title for our blog post today...!  We knew that with the winds shifting a bit to the south it was just a matter of time before we found one of these, what a spectacular bird!  Our inshore tack produced more storm-petrels, Black-cappeds (photo by Doug Gochfeld), 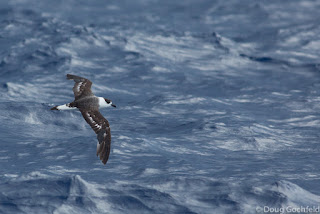 and shearwaters, and at 1321 a Fea's Petrel flew across the bow and down the port side, making sure that all aboard had awesome views before heading on its way (photo by Doug Gochfeld)!  This is the third day in a row we have seen Fea's Petrel!! 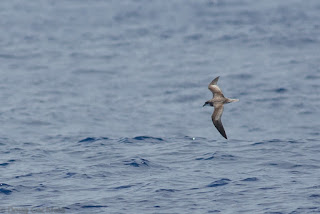 A dark morph Pomarine Jaeger came in to join our feeding flock, and before long we had an afternoon following with a Black-capped or two, shearwaters, storm-petrels, and jaegers all making an appearance (photo by Doug Gochfeld)!  Black-cappeds really are not fond of the skuas and jaegers! 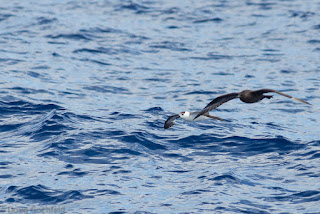 Cory's were hungry today and it was awesome to watch them diving in the slick with a couple of Great Shearwaters...showing no fear of the jaeger who was eating right next to them!  Just before we picked up some speed inshore of the shelf break, a Bridled Tern flew by - wow, just one more species for the day, and one we have not seen often this spring!  Another adventure in the Gulf Stream, it has been an interesting spring and it seems each day holds such potential...but don't they all if you're out there?  We still have space on the rest of the Blitz trips, just give us a call or email if you're interested in joining us for one of these amazing days!  Thanks again to everyone who joined us today and also to our leaders, Doug Gochfeld & Sea McKeon.

All photos today are by Doug Gochfeld!
Ventral view of the Fea's Petrel 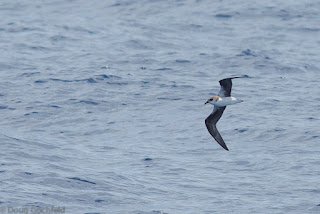 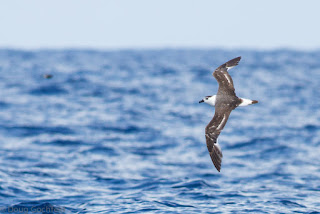 A couple more of the tropicbird! 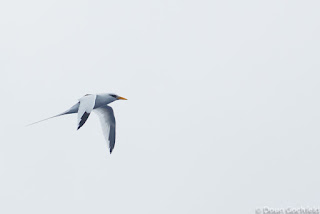 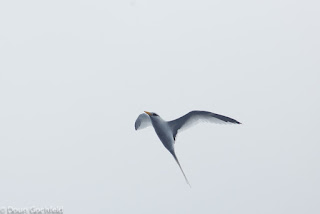 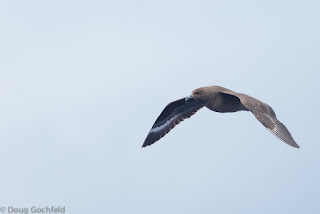 Posted by Kate Sutherland at 3:16 AM