Morning dawned with little wind, after yesterday's confused washing machine seas in the Gulf Stream, we headed offshore with a gorgeous sunrise to the east and calm seas ahead! 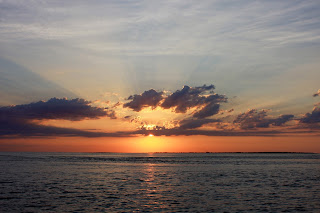 The knowledge was with us, however, that the forecast was for the wind to pick up in the afternoon from the southwest...so while we enjoyed the morning, we looked forward to the afternoon when winds would get our seabirds up and flying, not to mention carry the delicious (it's all relative..!) scent of our slick a bit farther!  Shearwaters were inshore of the shelf break along a nice sargassum line, so we slowed to enjoy close, leisurely views of Audubon's, a species we only caught a glimpse of yesterday.  Cory's and Great Shearwaters were present and we even had a nice shearwater flock over some Skipjack close to where we slowed down.  It took some time to get the first Black-capped Petrel and one did not appear until we were observing our second Band-rumped Storm-Petrel of the morning (a species we did not even glimpse yesterday!). 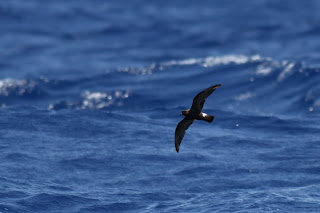 The winds steadily increased midday and our feeding group of shearwaters and storm-petrels in the slick increased as well with some Black-capped Petrels showing a healthy interest in our fish oil & chum blocks!  Two of these birds were sharp looking, fresh individuals! 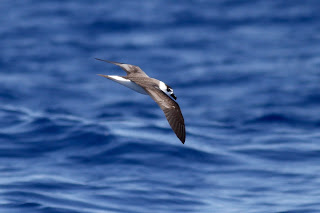 The feathers looked fairly uniform on both, perhaps indicating younger birds.  Many times when we have younger birds visiting the slick, they stay for some time feeding and show little to no fear of the boat - though some stiff winds help any Black-capped feel more secure passing closely!  These two today stayed with us for some time, feeding with the shearwaters and just about flying over the stern!  Just from the numbers of Black-cappeds we see off of Hatteras it is obvious that there are unknown nesting populations.  As recently as 2015 evidence showed that they are nesting on Dominica, it is also possible that Cuba, or other locations in the Caribbean, could host colonies.  I still am amazed, and humbled, that there are unknowns with our present day knowledge ever expanding, not to mention all of the technological tools available to us!  Fortunately in the Gulf Stream the Diablotin continues to rule, and we can stand in awe, watching these children of the wind. 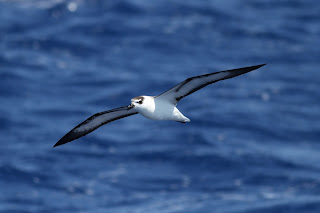 It was nice to have close encounters with our Gulf Stream specialties today after spending most of yesterday with fairly low numbers of birds (though the European Storm-Petrel kept us entertained for much of the day!!).  We even found our first Pilot Whales of the season this morning, and they watched us watching them...a couple were spy hopping right next to the boat!  A big thank you to Chloe Walker, who helped us on eight trips this spring!  Thank you also to Jeff Lemons & Sage Church for helping us lead the trips this weekend - and of course thank you to everyone who joined us for a trip to the Gulf Stream this spring!  So far 2016 has been a spectacular year! 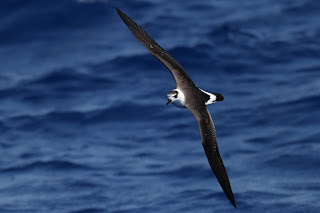 It was interesting to see the difference in the underwing patterns of these two birds! 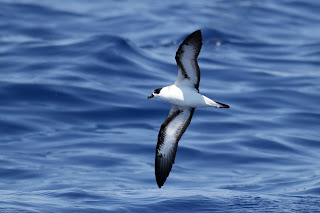 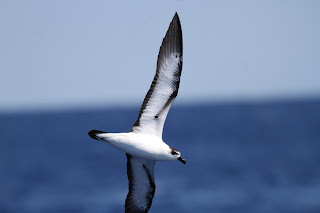 And in examining the many photos I took, it seems that there is some contrast between the primaries & secondaries indicating that these birds are maybe a couple of years old. 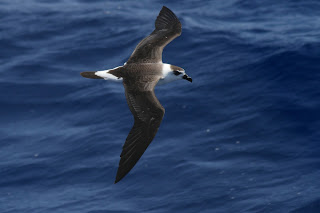 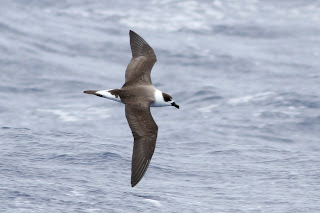 The most numerous shearwater today was Cory's, while we saw many that gave us pause as we searched for a nominate bird, most had intermediate amounts of white in the underprimaries like this one pictured below: 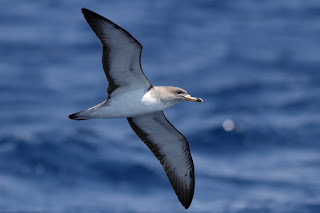 I think my 400mm lens was a bit much for the Pilot Whales! 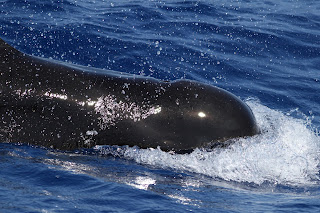 Posted by Kate Sutherland at 11:43 PM