I had high hopes when we headed out this morning. After two days with just a little bit of wind, we had a fair breeze this morning and it was forecast to continue through the day. It was a bit bumpy in the green water, but when we reached the Gulf Stream the seas had a nice spread. There was no rain this morning, but the birds were on the move. The morning hours were productive, but the birds did not want to follow us much as we quartered into the wind so the current would not push us too far up the break. The Gulf Stream was moving swiftly out in the deep. Black-capped Petrels (photo below by Will Brooks) and Band-rumped Storm-Petrels arrived as if on cue today, but overall diversity of seabirds was on the low side, and numbers were modest. 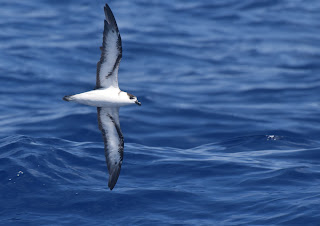 Sargassum has been comparatively scarce lately, but we did find some fair sized streaks about 28 to 30 miles out. Kate spotted a dark bird off the bow that looked odd and it was feeding over the Sargassum. Although we never got great looks at it, it appeared to be a Brown Noddy. I tried to chase after it, but we were getting too much spray from the wind chop. It was frustrating, but a reminder that the birds and conditions do not always work out for us to get a good look. After we got about as far north as I felt we should go, I started an inshore tack toward the shelf break. We jumped a few Black-capped Petrels along the way in, but the highlight was when Chloe Walker spotted a light morph Trindade Petrel. It was a good view for those who were there when it came by, but it did not stick around for a second look.  This was our seventh Trindade Petrel for the year and our second light morph.  We tried to lure the Trindade Petrel back with more chum, but all we got was great close looks at three Band-rumped Storm-Petrels (photo by Kate Sutherland). 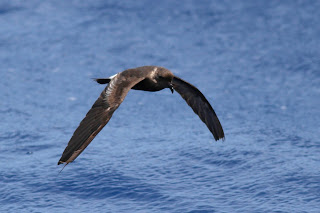 After that it was time to head back to shore. The ride back was uneventful but not too rough. I would like thank Kate Sutherland and Chloe Walker for helping to lead today’s trip, which was the 15th in 15 days for Kate and I.  That was a good run, but still four days short of our 19 day run in 2009. As usual it was great to be out there every day for two weeks and get a feel for the season, which was very different from last year.  I would like to thank everyone who made it possible - our trip participants and our outstanding crew of guides, most of whom did several days this spring.  It was a good time and I’m glad we were able to run all but one of the trips so far this spring.  Thank you also to participant Will Brooks who allowed us to use some of his photos from today here!

We had a few Cory's following the boat today and while I did not see it at the time, this bird had some extensively white under primaries, not quite enough for a certain id as Scopoli's, but more than would be seen in an Atlantic Cory's...  There is so much variation!  (Kate Sutherland) 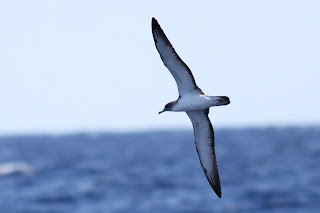 The Cory's were quite attentive in the slick today (Kate Sutherland) 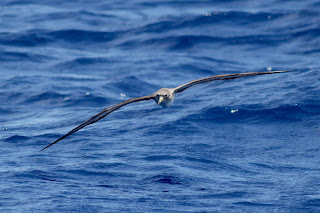 One Great Shearwater made a couple of nice passes, but did not stick around in the slick (photo by Will Brooks) 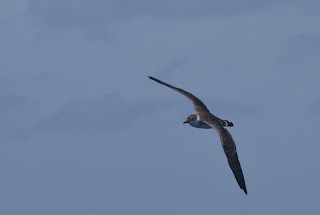 Our Wilson's Storm-Petrels gathered up quite well on our drifts (top photo by Will Brooks, bottom by Kate Sutherland) 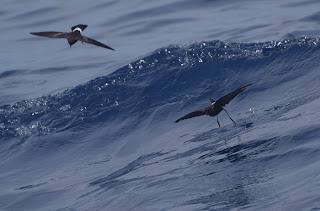 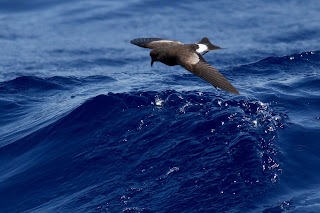 We had some really good luck with Band-rumpeds!  This photo is of the same individual as above (in the post) taken by Will Brooks. 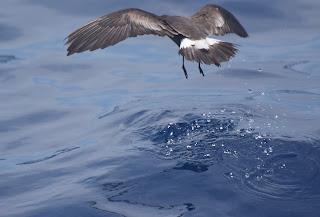 & a fresh individual from the afternoon slick...(Kate Sutherland) 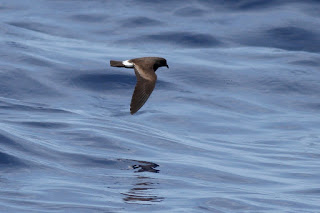 One of our first Band-rumpeds of the day!  The molt looked quite typical for the "Grant's" type (Kate Sutherland) 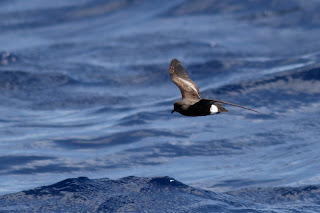 On the way back to Hatteras Inlet, I took position in the bow pulpit to attempt some photos of flyingfish.  This looks like an Atlantic Patchwing with some rosy wings (Kate Sutherland)! 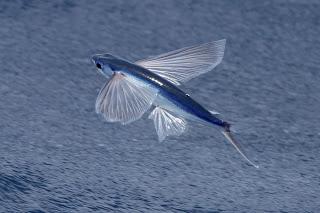 I was hoping this was a different species with the wholly dark tail fork, but it seems to be a Patchwing or variant there of...!! 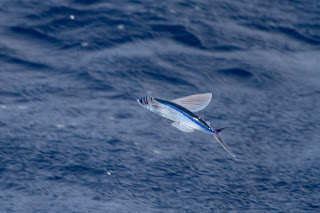 Posted by Kate Sutherland at 11:26 PM