After having already run six winter boat trips beginning in late December, it was nice to have a full boat for the last trip of the season. We’ve had some great trips here recently and our people were excited at the prospect of a day at sea, especially those taking their first trip with us (photo by participant Craig Harms). 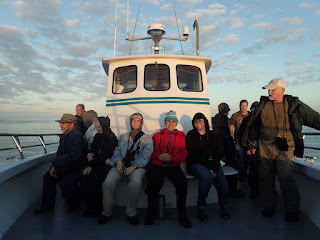 Although it had only been five days since our last trip, I figured this one might be a bit different. We had endured almost constant southerly winds since Monday morning, and the cold water had been pinched by the Gulf Stream mid week, only to return southward a couple of days later as the Gulf Stream retreated a bit to the east. Cold water is where we find alcids, but warm water can good for tubenoses and phalaropes.

With this in mind, I decided to head to the color change, which on Saturday morning was just southeast of Diamond Shoals. The water temperature was in the 60s out past Hatteras Inlet, and there were many Bonaparte’s Gulls around. We had a close but quick look at an adult Little Gull among a flock of Boneys less than 30 minutes after we crossed the bar. During our second half hour at sea we began to see a few Northern Fulmars and we spotted our first Manx Shearwaters of the day. The water warmed and the wind freshened a bit from the WSW as we proceeded on our course eastward. A couple of miles south of Diamond Tower we found a sharp color change where the 73 degree Gulf Stream water gave way to 61 degree shelf water.

There were many Bonaparte’s Gulls feeding at this frontal boundary, and we also found a few dozen Red Phalaropes along the change (photo by Kate Sutherland). 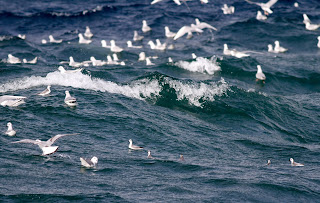 This was the most phalaropes we had seen this winter. There were also several Manx Shearwaters feeding in this area and more fulmars visited our slick here than anywhere else (photo by Kate Sutherland). 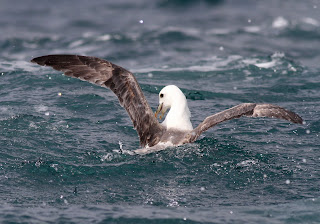 I was hoping to find a Dovekie or a puffin here, but we had no such luck. After a while of searching I pointed the boat down sea again and we headed northward in search of cooler water and alcids.

It took a few miles of traveling to find the conditions we were after, and sometime after 11:30, we were starting to see some Razorbills and the water was down near 50 degrees. We were also seeing scattered Bonaparte’s Gulls, Red Phalaropes, and a Little Gull crossed our bow at medium distance. There were very few gannets around and I had just about given up on seeing a skua, but sure enough, one found us and even came down to eat some chum in the wake. A few minutes later a second Great Skua appeared a bit farther astern. I cannot recall a season with as many skua sightings as this winter. We have seen them on every trip we’ve run, and we have had more close encounters than usual (photo by Kate Sutherland). 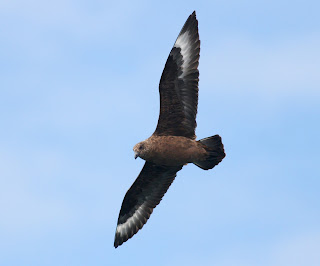 This has also been our best winter ever for Razorbills. A couple of miles inshore of where we saw the skuas, we found many more Razorbills. There were several flocks of a dozen or more feeding under larger numbers of Bonaparte’s Gulls. We were able to drift right into these feeding flocks a few times, and we had surprised auks popping up around the boat (photo by Brian Patteson). 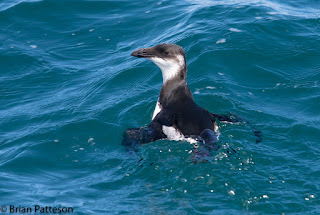 There were also many Loggerhead Turtles in this area, such that I had to be look carefully when I put the boat back in gear. We looked hard for murres, but we could not find one. It was less than ideal with swell, cross chop, and alcids that were constantly diving. We saw many more flocks of Razorbills on our way south to Diamond Shoals.

We crossed the shoals about three miles off the beach and were soon back in the warmer water. There were plenty of Bonaparte’s Gulls, but for the most part it was fairly quiet on the south side. About half way back to Hatteras Inlet, a second winter Glaucous Gull joined our flock (photo by Kate Sutherland). 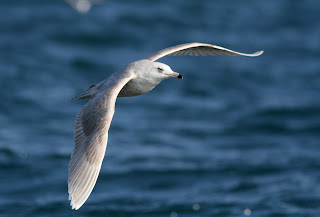 This was our first of the season. Better late than never, we were glad to see it. A little farther along we flushed an Atlantic Puffin from the sea. Fortunately it was on the shoreward side of the boat, out of the sun glare. Several people were able to see it before it peeled off and doubled back to the east. This puffin kept up our streak for the species; we found puffin on all of six of our winter trips in 2018!

In closing I would like to thank everyone who came out with us, making it possible to run these trips. I would also like to thank our guest leader for Saturday, Jeff Lemons, for coming out from Charlotte. And big thanks go to Kate Sutherland, who has helped lead all of these trips with me. Kate also had to dish out pretty much all the chum and spot a great number of the birds, all while answering questions and taking photos for our trip reports. And then she gets the trip reports and eBird lists posted without fail.

We had some awesome, fresh chum this weekend thanks to local fisherman Ruben Trant!  Here is the chum gallery...photos by Kate Sutherland except for the Menhaden photo!
Most of the fish were Menhaden, plus we had a couple of chum blocks, and fat from Conner's Supermarket. 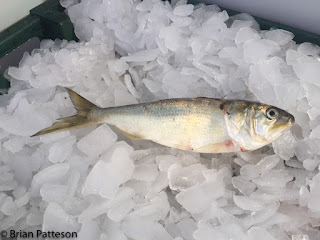 One of the Great Skuas thought it was worth a stop 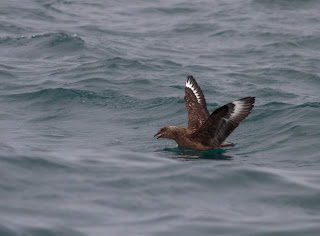 We only saw a small number of gannets compared with our past few trips, but they also were interested...the fresher bait sinks faster giving these divers a chance to get some nice pieces. 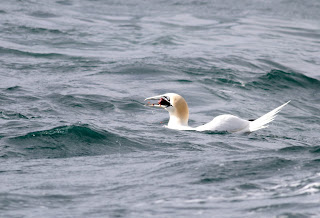 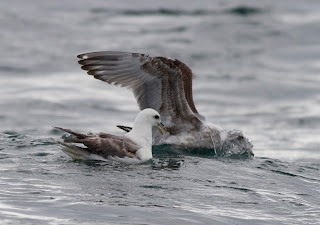 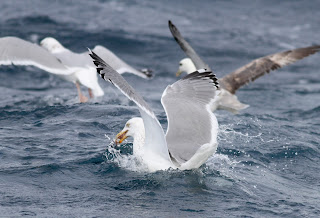 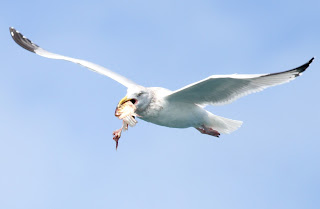 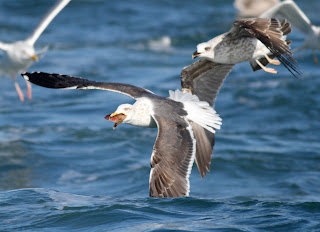 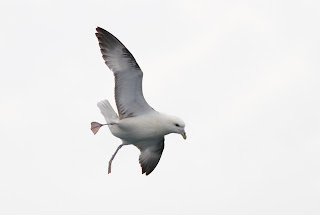 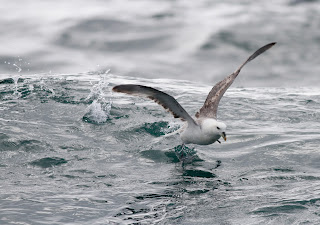 Red Phalaropes with Boney's on the change 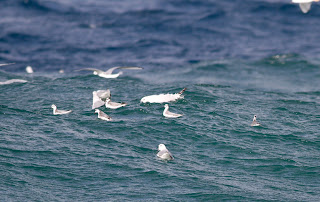 One more Great Skua...it is the last trip until next winter...!!  And they have been so cooperative this season! 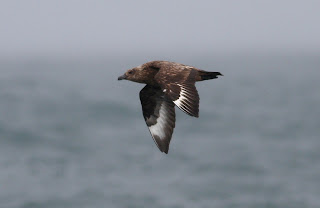 One of the Loggerhead Turtles, amazing the creatures that find a home on their shells! 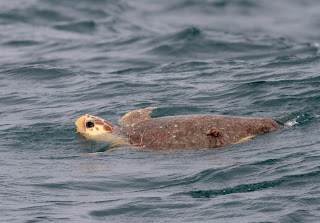 Posted by Kate Sutherland at 7:03 PM