It was good to be back out on the water this weekend. Nathan Gatto organized a group from the Forsyth Audubon club for a birding charter on our boat. It was still a bit windy when we got to the inlet, but it was a north wind so the shoreline provided some shelter and there was an abundance of Razorbills close to the beach. That’s not too surprising because cold water had surged southward in previous days, as you can see in this sea surface temperature map from Rutgers (marine.rutgers.edu). 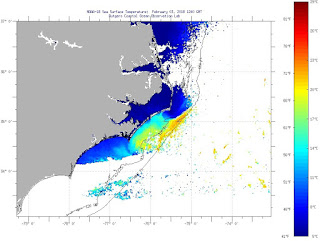 Earlier in the week I had seen over 12,000 Razorbills from the beach at Cape Hatteras, the most recorded here to date. Razorbills tend to fly in the morning and they kept us busy counting as we worked eastward closer to Cape Hatteras.

As we got near Diamond Shoals, we began to see hundreds of Red-throated Loons flying.  These small loons are much more aerial than Common Loons, and like the Razorbills, they have been quite abundant locally in recent days. Similar to last weekend, there were also several Manx Shearwaters close to shore. We stayed in the lee of the shoals and worked slowly to the southeast. We knew there was a hard change somewhere inshore of the shelf break, probably in about 30 fathoms (you can see this on the temperature map above!).

The water temperature increased slightly from mid to upper 40s as we got closer to the change and we added a few species to the day’s list. An immature Black-legged Kittiwake joined our flock of birds trailing the stern and came in for a close look (photo by Nathan Gatto). 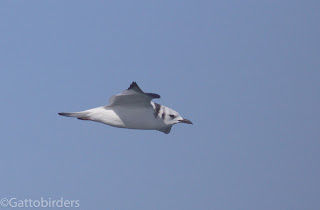 A couple of Dovekies popped up beside the boat, but they spent a lot of time underwater and were not easy to see in the chop. A Great Skua appeared far astern and promptly headed away into the wind.

Soon after 11:00 we could see blue water on the horizon. As we got closer to the color change, we spotted a couple more Dovekies and an adult Little Gull.  Both of these are species that we did not see on last weekend’s trip. We had been seeing a good number of Bonaparte’s Gulls all morning but they had been scattered. Little Gulls are rare but regular here in winter and they are frequent associates of the Boneys.

There was a small concentration of Bonaparte’s Gulls feeding along the color change and we moved in closer to investigate. We soon began seeing scattered Dovekies along this break and another Little Gull was spotted- this time feeding with the Boneys. This bird was much closer to the boat and was easily seen without binoculars (photo by Ed Corey). 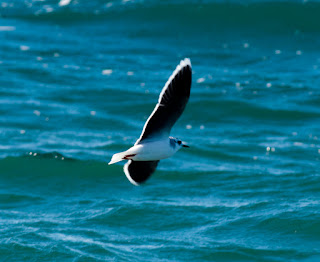 We followed these small gulls for a while and found a single Red Phalarope in their midst. It was a bit odd to see just one phalarope, but it pitched close to the boat and we were able to see it quite well.

As we worked westward on the change, we noticed less bird activity, so I decided to turn around and track the change to the eastward. Soon after we came about, a Northern Fulmar came by to check out our chum. Next we got bombed by a Great Skua that appeared suddenly over the bow at point blank range (photo by Ed Corey). 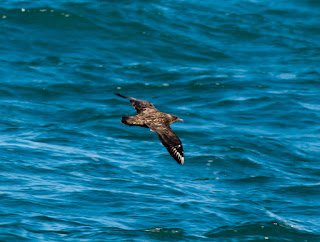 My sense is that it came out from the sun glare over the blue water. A little farther ahead Kate spotted a couple of Atlantic Puffins. The puffins gave us good looks and we picked a few more Dovekies along the change. A very lethargic looking Loggerhead Turtle appeared on the blue water side of the change. Perhaps it had just arrived there and was a little stunned from being in the cooler water. The blue water was in the 60s so it was a better place for the turtle to be (photo by Kate Sutherland). 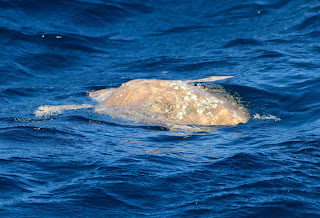 Turning back towards the inlet, we found a few more fulmars zipping around just inshore of the change. There was a bit less wind and we were able to spot several scattered Dovekies for the next few miles too. Razorbills were still flying well into the early afternoon and we saw many hundreds (photo of flock by Ed Corey, individual Razorbill by Nathan Gatto). 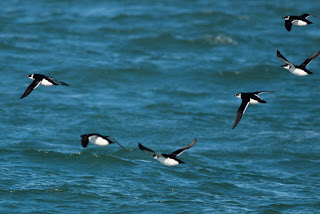 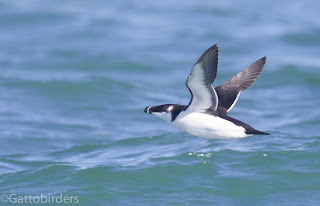 In the half hour between 1:00 and 1:30 PM, we tallied 435 of these auks, and we saw them in good numbers right up to the beach.  We saw several Bottlenose Dolphins just out side the inlet and we also had a lone Humpback Whale a couple of miles off the beach.

We ended the day with a new record count for Razorbills on our trips, 2515, and it was a great day for seabird diversity. I would like to thank Nathan for bringing us this charter, and of course we could not have done it without our experienced crew. Thanks go to Kate Sutherland for her ceaseless work on the deck, and also to our guest leaders for the trip: Ed Corey, Nathan Gatto, and Jeff Lemons.

Thanks to Ed & Nathan for allowing us to use some of their images here for the blog!  A few additional photos are below:
The color change!  Wish we had this on every trip - it was beautiful - about a 15 degree change from green to blue water.  Sea smoke is visible on the blue side (warmer water) with a flock of Razorbills in the distance.  (Kate Sutherland) "Auks Patrol These Waters" 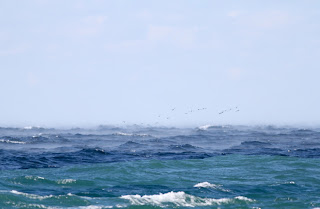 Atlantic Puffins, our first pair on the water by Kate Sutherland 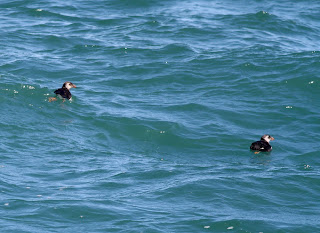 And a closer look by Nathan Gatto! 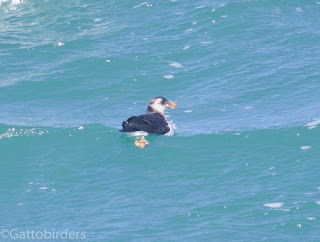 I only took one picture of a Dovekie...so here it is (Kate Sutherland) 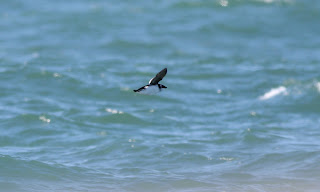 And our Red Phalarope in flight (Ed Corey) 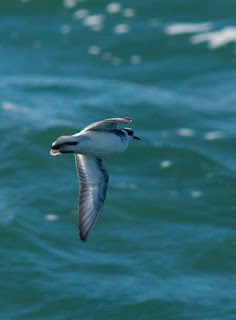 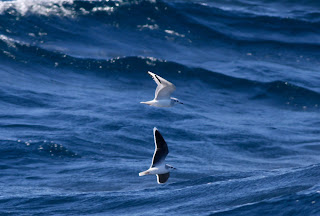 Bonaparte's Gulls, in flight and on the water (Kate Sutherland) 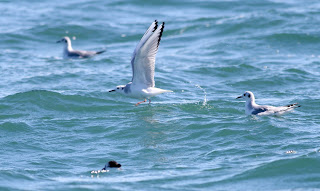 You have got to love the face of the Northern Gannet! (Kate Sutherland) 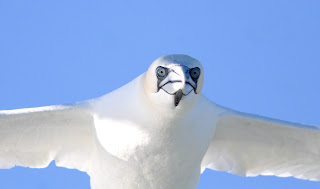 And finally, one more Razorbill photo!  The light was nice and these birds were flying right by the boat - it was a perfect day to photograph some Razorbills!  (Kate Sutherland) 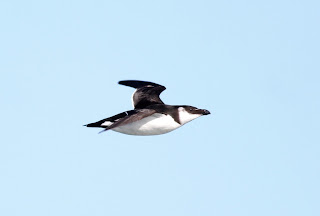 Posted by Kate Sutherland at 1:57 PM