Following yesterday’s blowout (which meant all trips out of Hatteras were canceled) and then impressive lightning, thunder, and torrential rain overnight we met at a rain-soaked dock to head offshore for the penultimate day of the Spring Blitz. The wind shifted to a fresh northerly and it was breezy to blustery all day with variable cloud and sea-surface temperatures up to 81 degrees F. After a 2-hour commute we slowed down in the blue water and very quickly found an obliging Bridled Tern perched among patches of Sargassum. 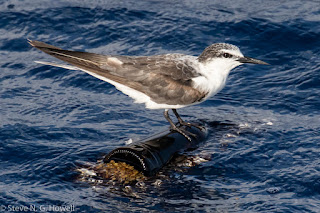 Time for a chum slick, and the Black-capped Petrels appeared as if by magic, a small group of them instantly swarming around the boat and—what was that with them? Looks like a Bermuda Petrel! Excitement and cameras clicking as the “Bermuda Petrel” zipped around the stern showing well—wow, what a start. But then Kate and Brian started to question it and a check of images showed it was a, well, we don’t know what it really was... However, whatever it was it looks like the same thing that we saw out there on 28 and 30 May 2017—see Brian’s write-up on that enigma here: https://seabirding.blogspot.com/2017/06/the-pesky-pterodromas-from-may-28-30.html

The bird’s wing molt at this season indicates a winter breeder on a similar schedule to Black-capped Petrel, and one possibility is a hybrid Black-capped with something else, perhaps with a Cape Verde Petrel (the mainly winter-breeding “Fea’s Petrel” that breeds on those islands, vs. the summer-breeding Desertas Petrel). Another possibility is an as-yet-undescribed taxon with a very low population size, akin to the Bermuda Petrel on the edge of extinction but with unknown breeding grounds. For now we’ll just call it Roger, the Whiskey Tango Foxtrot Petrel. Here are some shots of today’s bird, which you can compare with Brian’s write-up on the 2017 bird. 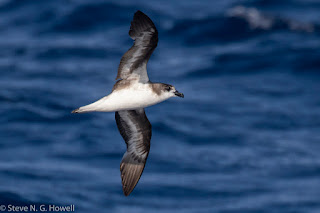 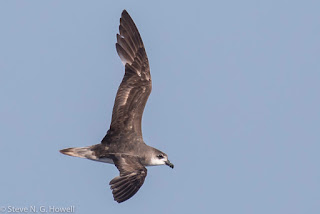 Roger, the Whiskey Tango Foxtrot Petrel, first seen about 8.15 am and last seen just after 9 am, giving us ample opportunity to not identify it!

After that excitement we found both Leach’s and Band-rumped Storm-petrels in the slick among the Wilson’s, but the choppy seas made seeing them, let alone photography, difficult. A single Pomarine Jaeger made a pass at one point, and a distant Sooty Shearwater showed briefly, padding out the diversity. But it was the almost unrelenting Black-capped Petrels that stole the day, reveling in the wind and sweeping all around us for hours. At one point, a veritable blizzard of 16 or 17 birds wheeled in the slick behind the boat (about 1% of the world population!), screeching and chippering as they squabbled for food. 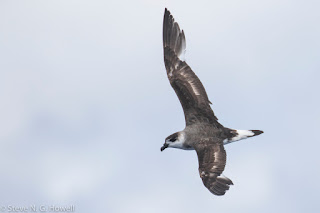 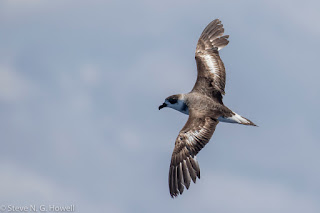 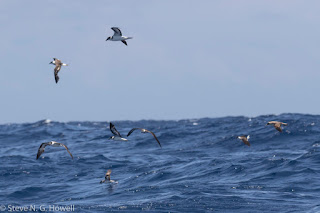 A Band-rumped Petrel showed well a few times amid the Black-capped feeding frenzy, and at 13.45 the cry of “booby back there!” rang out. And sure enough, an immature Masked Booby made a nice pass, dwarfing the Black-capped Petrels. 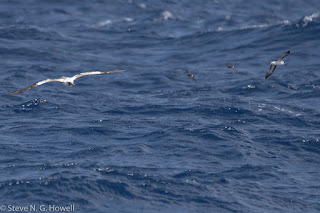 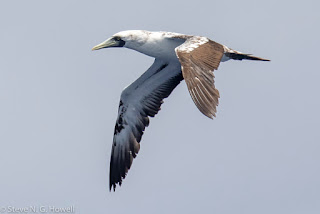 The adrenalin of the booby was wearing off as we continued our tack towards shore, but then a European Storm-petrel flew right up the slick among a few Wilson’s. It was close, short, and sweet, but sadly the choppy seas meant that only a few people got on the bird before it veered off. A handsome first-summer Arctic Tern then appeared, but was largely ignored as we set a slick and scanned for many minutes in vain for the storm-petrel. Oh well, some things get away, and it was a hell of a day, even if we don’t know what we saw ;-) 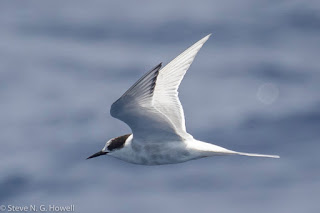 Thanks to everyone who joined us out there today, plus spotters Peter Flood, Steve (N G) Howell, Sea McKeon, and Nick Newberry—Steve also wrote the blog. See (some of) you out there again tomorrow for the last day of the Blitz!