Physicists will tell you that space and time act something like a fluid, bending around objects as a river accommodates a rock. How we perceive time is dependent on our own speed and position. Pelagic wildlife observers know this phenomenon well, understanding that time onboard can stretch or contract with the vagaries of wind and current and behavior.

After a lively ride out to the Gulf Stream left a live flyingfish on deck, we were treated to good numbers of Black-capped Petrels almost immediately.  Accompanying us throughout the day, they would get increasingly close to the Stormy Petrel II until by early afternoon the birds were just out of reach, seemingly enjoying the freshening breeze.  (photo Peter Flood) 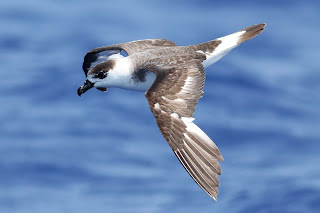 A Pomarine Jaeger drew the attention of the Black-capped Petrels as it dropped from the sky to hone in on the growing chum slick. After an initial show of force, the petrels left it to feed well within the range of the cameras on board, with repeated close passes and great views of ‘1 ½ spoons’. (photo Frank Hawkins) 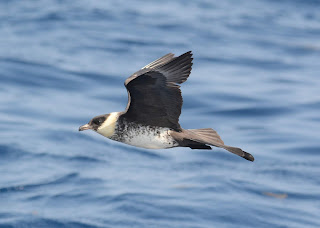 Audubon’s shearwaters had wind to fly, and rocketed past with strong lines of Sargassum stretched underneath and good light on the contrasting colors of this species. We had one early Audubon’s foraging near to the SPII with wings outspread and pattering feet like a giant storm-petrel. Cory’s type shearwaters passed by at speed and distance in low numbers throughout the day, with one individual showing characteristics of Scopoli’s shearwater. (photo Peter Flood) 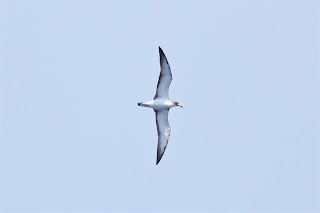 Spotted Dolphin appeared for a few moments off of the bow on the way out, and remained our only marine mammal sighting until the afternoon when 4 juvenile ‘offshore’ Bottle-nose Dolphin came charging into the bow audibly whistling. A few moments later and the adults and calves appeared, with the total pod numbering some 37 individuals. (photo Frank Hawkins) 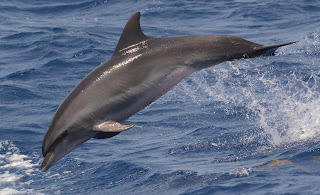 The highlight of the day came in the flocks of storm-petrels that slowly gathered in the menhaden oil slick carefully laid out behind us. The exhortations of Brian, Kate and leaders to study the small and stiff-winged Wilson’s Storm-petrel paid off as we were graced with at least seven Band-rumped Storm-petrels, which seemingly bent time to dance effortlessly around the smaller Wilson’s and our vessel. Photos revealed a few individuals were completing their 2nd prebasic (post juvenile) molt (top) alongside adults (bottom). (photos Steve Howell) 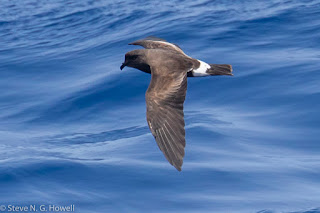 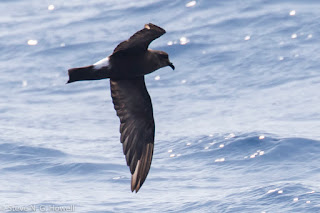 *Thanks to everyone who joined us today & a huge thanks to our leaders, Steve Howell, Sea McKeon, and Peter Flood!  Sea also penned the post today and Steve & Peter, plus participant Frank Hawkins, supplied me with photos! -Kate*

Black-capped Petrels were flying straight in towards the stern, like this dark-faced individual (Steve Howell) 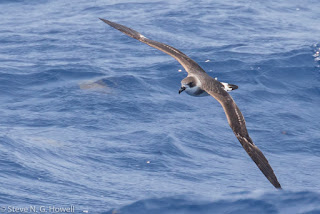 Frank Hawkins captured an image of a very dark-faced individual 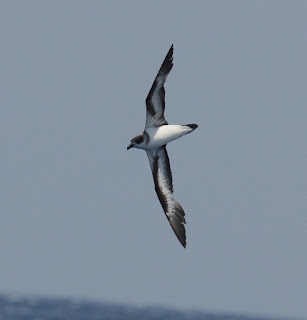 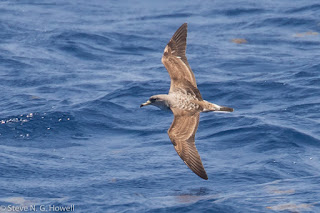 Wilson's Storm-Petrels were very cooperative in the slick (Peter Flood) 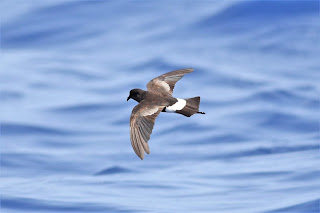 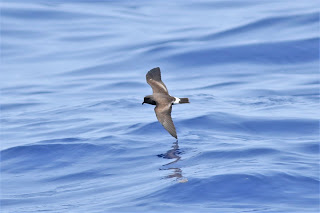 And one more Bottlenose Dolphin image! 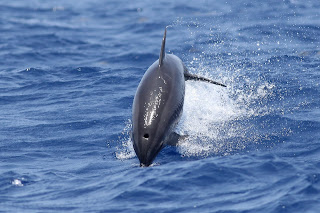