Today was the same as yesterday, in that it was different from every other day, the classic pelagic situation where habitats come and go overnight with wind and current. Overall it was a very pleasant sunny day with generally low seas and light Southeast winds. We headed out of the inlet as a burning red sun emerged from sleep over the Cape Hatteras lighthouse and our commute offshore featured a Northern Gannet, the expected Cory’s-type and Sooty Shearwaters, plus a Pomarine Jaeger and a bonus Leatherback Turtle, rarely seen here in spring. Slowing down in the blue water around the shelf break we found some Audubon’s Shearwaters and had a nice show of flyingfish before the chum block attracted its first customers—diminutive Wilson’s Storm-petrels, all the way from Antarctic breeding grounds to spend their “winter” here before heading back south in September to breed in the land of ice. Here’s an adult with obvious wing molt. 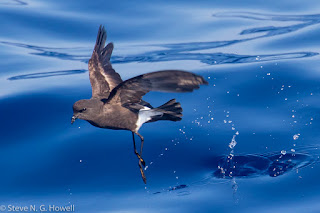 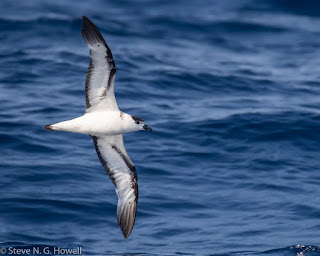 And here’s a classic black-faced type. As well as face pattern note underwing pattern, bill size, and later wing molt timing of the smaller Black-faced types, indicative of later breeding than the white-faced types, whose breeding grounds even remain a mystery: 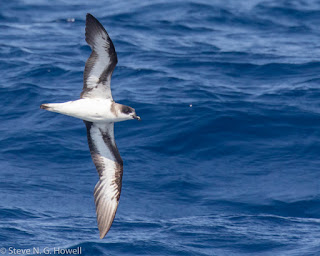 And a (OK, cheating) Photoshop composite of dorsal views 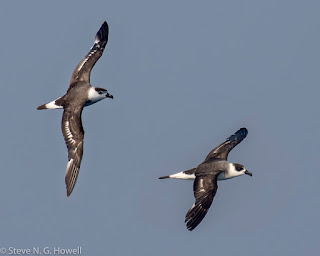 Moving away in a strong current—ripping north at over 4 knots—we continued into the deep blue and shortly after 10 am a very obliging South Polar Skua flew in to the boat, and stayed so long that people stopped watching it (and even stopped photographing!)—another molting migrant from Antarctica. 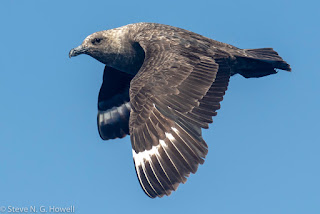 Things slowed down in late morning, but the first “large storm-petrel” appeared just after 11 am and at first was thought to be a Band-rumped. Examination of photos, however, showed it was a (presumed 2nd-summer) Leach’s with the tail fork worn down to look squared. Plus in calm conditions the flight of Band-rumped and Leach’s can be very similar—a good lesson for all. Here’s a photo to show the distinctive long slender bill of Leach’s, plus a relatively bold pale upperwing band, the worn tail, and the hint of a dusky median line in the white rump—although some Band-rumps can show this also! 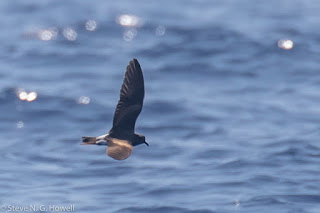 Then, an hour later, a real Band-rumped Storm-petrel showed up—note the thicker bill among other features—bill shape may seen an esoteric feature but, just like sparrows and warblers, subtleties of bill shape can be useful in ID and reflect different feeding strategies and foods. This bird is a small and non-molting bird, thus presumably a Madeiran Storm-petrel, one of 4 cryptic species of Band-rumps that breed in the eastern North Atlantic, at least 2 of which visit Hatteras waters. 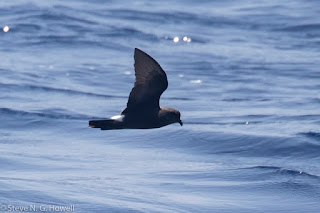 A midday lull followed, but at least it was hot and sunny... Then things picked up as we approached the shelf break—a second South Polar Skua joined us, and the first bird had also returned (it came and left several times over the course of 4 hours!), a Great Shearwater and then Sooty Shearwater joined the slick along with Black-capped Petrels, another Band-rump or two, and a Scopoli’s Shearwater swung by... (Scopoli’s is the “Cory’s Shearwater” breeding in the Mediterranean, split as a full species from Cory’s by the rest of the world although not (yet) by the Flat Earth American Ornithologists’ Society—sooner or later a saltwater enema will surely relieve their taxonomic constipation.) The busy finale was rounded out by a group of bow-riding Bottlenose Dolphins and then it was time for our commute back to the “real world” of life onshore.

Not again—just another frame-filling view of South Polar Skua! 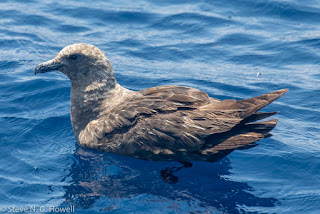 Thanks to everyone who joined us out there today, plus spotters Peter Flood and Steve (N G) Howell—Steve also wrote the blog. See (some of) you out there again tomorrow, and spaces remain for any who would like to come.

Flyingfish, an immature stage of species unknown, perhaps growing up to become... 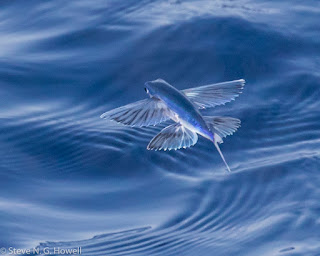 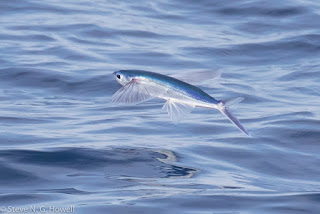 Posted by Kate Sutherland at 9:25 PM