What a difference a day makes... This morning we started out with a stiff southwesterly breeze, in theory not ideal for pelagic birding off Hatteras, and with cloudless blue skies. Given the strong current yesterday, Brian figured heading even more to the south than usual was the best way to work the situation, and our almost 3-hour commute out to the hot blue water was mostly pounding into choppy seas, slow and hard going—but it proved well worth it. As we slowed down among dispersed Sargassum weed a couple of immature Bridled Terns appeared and one allowed close approach for superb views, the first of this species for the Spring Blitz and a nice start. 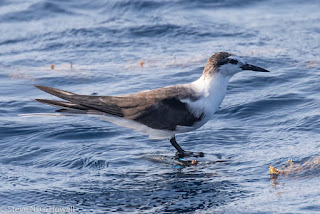 Out in the Gulf Stream the strong current actually helped settle the seas and it turned into a much more pleasant day than anyone would have guessed as the chum slick started to flow and a few Black-capped Petrels began to buzz around. Then, just after 8.30 a different bird flew by—Bermuda Petrel! It wasn’t close, but it was in good light and its unhurried pass meant it stayed in view long enough for everyone to see. After a steady buildup of sightings off Hatteras in the 2000s and early 2010s, the last few years have been a dry spell for this endangered species. However, Brian saw a couple on trips earlier in the spring (on 8 and 9 May) when he was engaged in Black-capped Petrel research, and this makes the third of the season, but the first on a scheduled Hatteras pelagic trip since 2015. Perhaps the tide is turning... Time will tell, but a great bird either way. 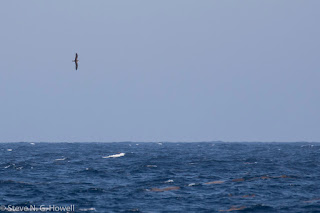 Zoomed in to see the narrow white rump band and dark hood. 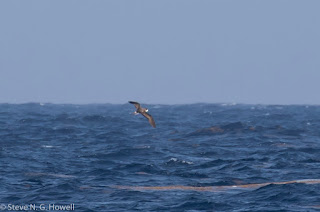 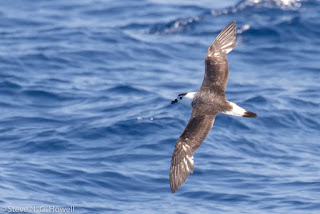 And a black-faced bird—different species, morphs, or just variation? The jury is still out. But both much bigger and bulkier than Bermuda Petrel, with a huge white rump patch. 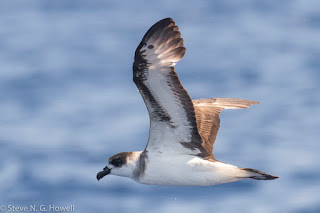 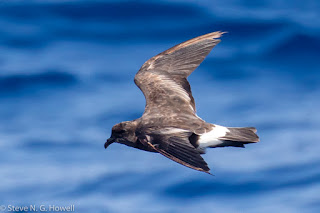 A South Polar Skua made a brief but close pass, unlike the birds yesterday that wouldn’t go away—remarkably, we’ve seen skuas on 9 of the last 10 trips. Then, at 10.15am Kate started screaming Trindade Petrel (pronounced as it sounds ;-) and sure enough a very dark morph of this South Atlantic breeder zipped around the boat providing absolutely stunning views but challenging photo ops—too close and too fast.

An uncropped image, but... Dear Canon, had you considered a decent auto-focus system that works for seabirds rather than for relatively slow-moving, 6-foot tall carbon-based bipedal lifeforms on sports fields? 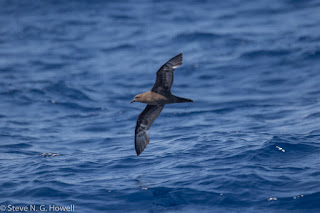 A sharper dorsal shot, and... 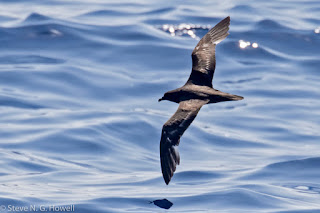 Less than a minute later, a bye-bye going away shot. Short but sweet. 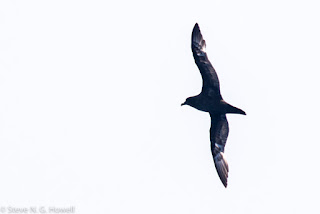 A midday lull followed, punctuated by a few groups of Bottlenose Dolphins, and Black-capped Petrels came and went—it’s not a bad day when the commonest bird you see is Black-capped Petrel, which globally is a highly endangered bird. A briefly breaching beaked whale added afternoon interest, and the commute back to shore featured another Bridled Tern plus some fancy immature phases of flyingfish, 2 examples below. Wow, quite a day. 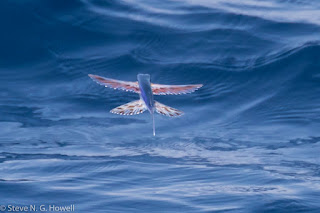 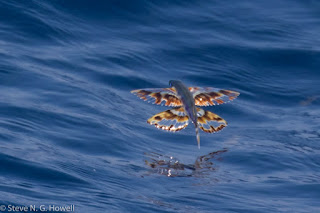 Thanks to everyone who joined us out there today, plus spotters Peter Flood, Steve (N G) Howell, and Sea McKeon—Steve also wrote the blog. See (some of) you out there again tomorrow...

Updated May 31, 2019 to add photos from participant Frank Hawkins!
A couple more images of the Bermuda Petrel 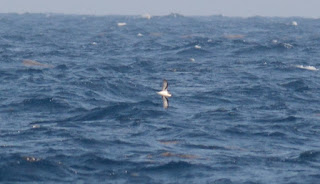 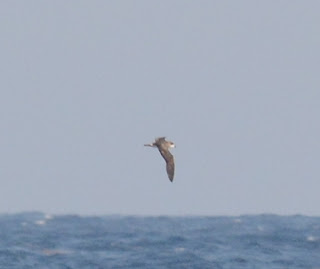 A nice dorsal view of the Trindade Petrel 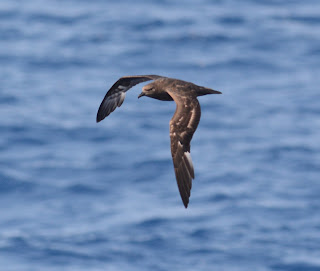 Black-capped Petrels as they came to feed on our chum! 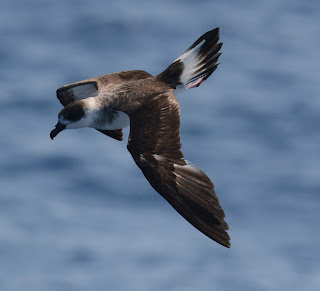 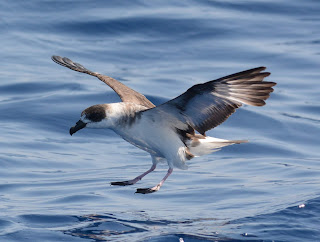 Posted by Kate Sutherland at 9:51 PM