Wow.  These were two days of incredible variety, differing conditions, and a lot of life offshore!  Both days had some rain and clouds, but also some sun, so we finally had those gorgeous sunrises we love to see on our way out in the morning!  Both days also found little current offshore in the deep, the Gulf Stream was moving at less than a knot.  Friday had light and variable winds, mostly from the north and northwest, and some swell from the south southeast.  Saturday there was more wind than they forecast, so it was up to 15 mph at times from the south west, falling out in the afternoon, also with an underlying swell from the southeast.  Saturday morning we slowed down just offshore of the shelf break and put out the chum, about 8 minutes later participant David Kirschke and leader Chris Sloan started shouting about a bird coming in up high...and a light morph Trindade Petrel zipped into the slick - right behind the boat!  Needless to say, Brian made a rare appearance on the deck and captured this gorgeous image! 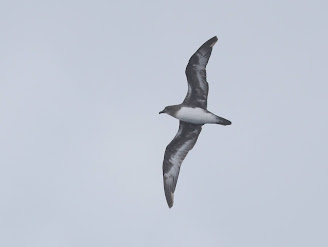 Saturday was also much better for Black-cappeds than Friday had been, just reinforcing the fact that these winged runners like the wind.  We tallied almost 60 of them that day!  Our storm-petrels also responded differently each trip with only 4 Wilson's (yes, you read that correctly FOUR) on Friday, 9 Band-rumpeds and 2 Leach's!  None of whom came into the chum and all of these large stormies were sitting on the water, here is one of the Leach's with an Audubon's (Kate Sutherland). 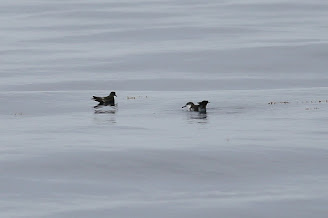 Saturday was a bit more typical with Wilson's following in the slick most of the day, though we still turned up some Band-rumpeds on the water!  Here are a couple taking off (Kate Sutherland) : 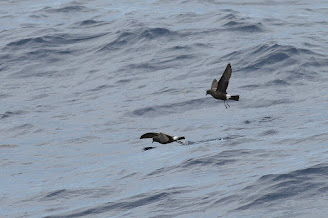 Bridled Terns were super cooperative on Friday and we saw two on Saturday...but Sooty Terns were not around like they were last weekend!

Unlike our petrels and storm-petrels, shearwaters were incredible on both days!  Friday's calm waters allowed us to see natural slicks all over it seemed, some held cetaceans, like the Mesoplodonts, Short-finned Pilot Whales, Kogias, and Offhsore Bottlenose Dolphins, while others held squid and fish!  All of them had shearwaters!  They were in tight groups that responded as food came to the surface.  Saturday the seabirds were a bit more spread out with arcing shearwaters in all directions, though a few times we got into some nice concentrations!  Scopoli's Shearwaters seemed to be the dominant species 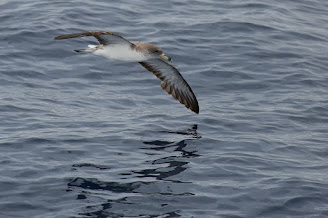 with some Atlantic Cory's and Great Shearwaters around as well.  Audubon's were a bit more scattered, but we had some excellent views of these small black and white shearwaters foraging around the sargassum each day!  Saturday one of these feeding flocks attracted a young Pomarine Jaeger that pursued an Audubon's before being pursued itself by a Black-capped Petrel!  Another species that we spotted while spending time with a group of shearwaters was a young Brown Booby!  We saw this bird from the wheelhouse and unfortunately it flew directly away from us.  Hopefully everyone got their eye on this sleek sulid before it was too far to see!  We captured some record shots, but that was it.  That's how it goes somedays!

Friday we had an incredible experience that I cannot help but share!  As we approached the shelf break we encountered another group of about 50 or 60 feeding shearwaters.  A Black-capped Petrel was with them initially, but peeled off when we pulled up to the group.  We could see some type of tuna breaking the surface and as we pulled closer to the activity, Chris Sloan mentioned he saw some fins in the water and what looked like blood!  I photographed about two minutes of activity and was so perplexed in the field with the shapes and colors of what was in the water.  Then I saw one tuna, they turned out to be blackfins, with some tentacles sticking out of its mouth - these were squid!  When I sorted my photos that evening I realized I had a series of a Great Shearwater capturing a squid and flying off with it! 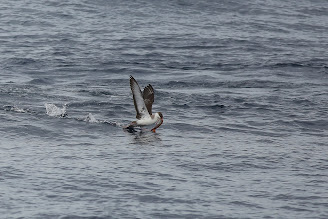 I could also see that what looked like blood was actually squid ink as these creatures tried to avoid capture!  I wish we had our underwater camera - what a Blue Planet moment!  I have put some photos into an album on Flickr, the link is here: https://www.flickr.com/photos/138110919@N07/albums/72157715628019828    And we finally got to sample some sargassum, see photos of our finds at the end of the photo spread!

Thank you to everyone who joined us out there, those who were able to be with us for two days had quite the experience!  And thank you to Chris Sloan, who took the time to join us for the last three sets of trips!  He also contributed photos for our eBird lists and these blog posts! 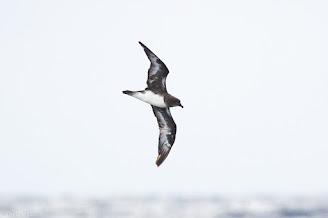 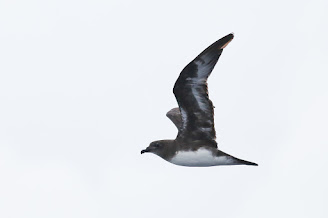 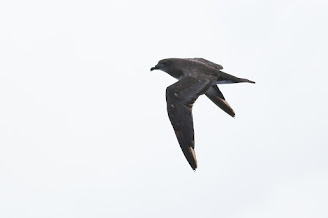 Black-capped Petrels did not come super close this weekend, but we did manage to entice some into the slick on Saturday!  We had a couple of white-faced birds (see below), but most that we saw were either dark faced or intermediate. (Chris Sloan) 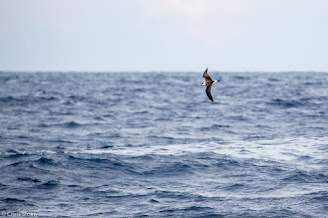 Atlantic Cory's were around both days, note the dark underprimaries on this bird and also the dark feathering in the leading edge of the underwing.  The bill and bird are also hefty! (Kate Sutherland) 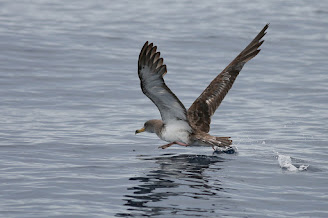 Versus the much more slender bodied and billed Scopoli's here - note the white in the underprimaries and also the paler feathering in the leading edge of the underwing. (Kate Sutherland) 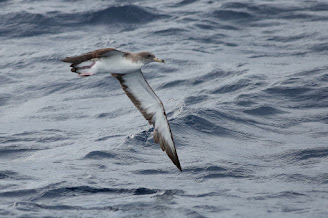 Great Shearwaters came in close to us each day!  (Kate Sutherland) 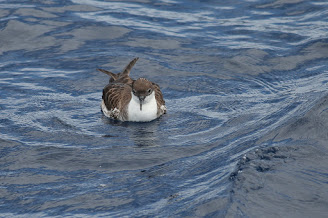 Here is an Audubon's flying over a Short-finned Pilot Whale on Friday's trip! (Kate Sutherland) 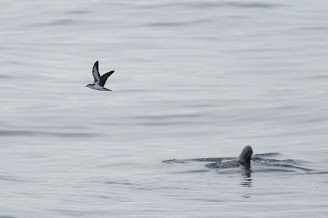 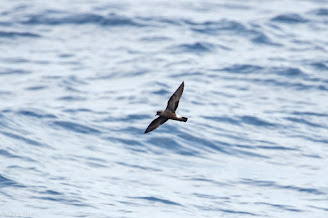 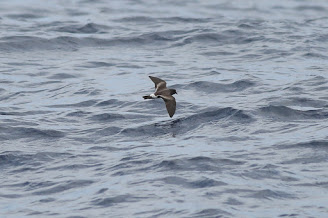 Bridled Tern and its reflection on Friday afternoon (Kate Sutherland) 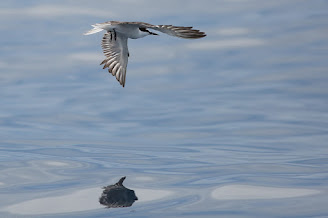 The sequence of Pomarine Jaeger and Audubon's Shearwater followed by the Black-capped escorting the Pom out of the area...!  (Kate Sutherland) 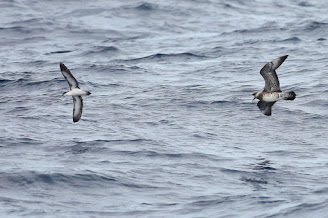 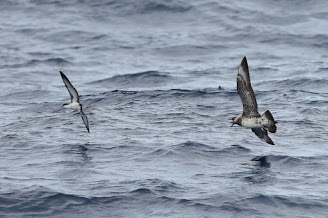 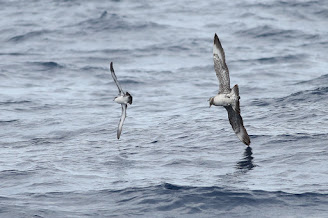 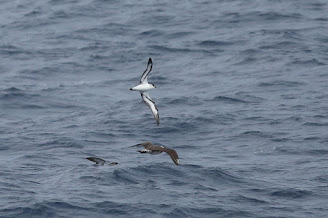 Dipping Sargassum with my new, smaller mesh net was productive!  We had a haul of the usual shrimp (Latreutes species) and swimming crabs (Portunus sayi) plus two cool fishes!  One was the planehead filefish (Stephanolepis hispidus) photo Kate Sutherland And the other was a small sargassum fish (Histrio histrio)!  Can you find it in the sargassum?  Maybe the photo following will help!  (Kate Sutherland) 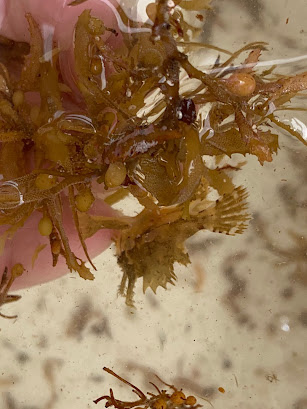 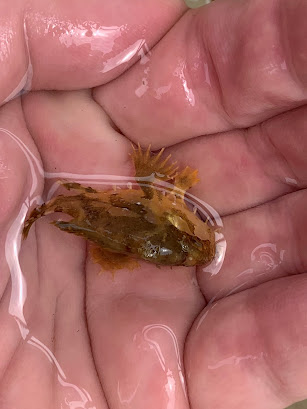 Posted by Kate Sutherland at 12:37 PM