This winter has been a tough one for running boat trips down here off the Outer Banks for a number of reasons. Fortunately, lack of participation has not been an issue, so we added a trip to the schedule to accommodate our faithful customers who were not able to get out with us last month. After a very warm day offshore last weekend, our most recent trip certainly felt like a winter boat trip! We had temperatures in the 30s when we headed out and the water temps near shore were in the mid 40s. The wind was brisk from the north. This made for a choppy sea, but the ocean was full of birds just outside Oregon Inlet.
As soon as we crossed the bar, there were dozens of Razorbills buzzing around and there were also a few hundred Bonaparte's Gulls feeding close by. I don't think five minutes passed before someone spotted a Little Gull, but it moved on. A few minutes later we found a couple more Little Gulls and had good views for everyone aboard (Brian Patteson). 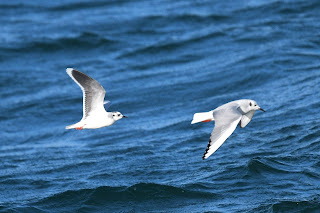 Not a bad start! Fortunately adult Little Gulls stand out from the Bonaparte's at a good distance, so we able to spot a couple more and we approached the flock to try for some photos. It was choppy, but the birds were so close that you didn't need a binocular to pick them out when we caught up with them. Many photos were taken and provided evidence that this flock of Bonaparte's contained at least seven adult Little Gulls (photo below Kate Sutherland)! There was also a first winter bird that most of us didn't get on, but at least eleven Little Gulls in that area! 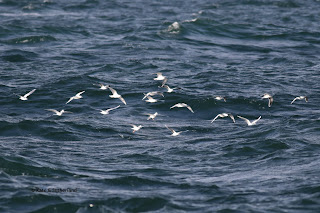 As we tacked offshore, Razorbills eventually began to thin out and we started to see a few Dovekies. The water temperature increased steadily as we ventured out beyond ten miles or so, and it was a bit warmer than last weekend by the time we got to 20 fathoms. We were not having any luck with puffins, but it's not too unusual to see them in warmer water, so we kept going. Northern Fulmars began to show, however, and seemed to be more widespread than last weekend (Kate Sutherland). 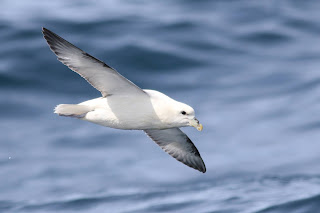 Winds were forecast to abate somewhat in the afternoon, so I figured we might as well check out the shelf break. We found water in the high 60s out near "The Point", a submarine canyon about 38 miles southeast of Oregon Inlet. Most of the charter fleet was out there, and they had been catching the occasional Giant Bluefin Tuna. There was also a large pod of Common Dolphins there and the put on quite a show right beside the boat (Ed Corey). 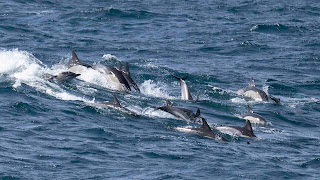 Bird-wise, there wasn't much to recommend it, but we did see a Manx Shearwater briefly, and there were a few more fulmars among the gulls and gannets. A couple of the fulmars were close and gave good photo ops while they scrapped with gulls for some fish guts. It was breezier out there and very choppy, so chances for spotting puffins seemed bleak. Taking this into consideration, I started tacking back to the west, hoping for slighter seas.
It took a while, but the wind did die down a bit and we found a couple of puffins back inshore (Kate Sutherland). 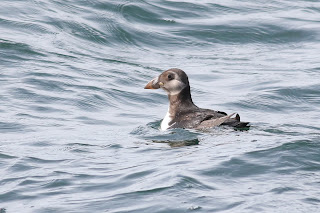 We also saw more Dovekies on our inshore tack than we had seen all morning. There was also a close Ocean Sunfish and a rather lethargic Loggerhead Turtle that allowed us close looks. And one more Manx Shearwater made a quick close pass on the bow. Sometimes we see quite a few Manx Shearwaters on these winter trips, but lately they have been scarce. We kept a sharp eye out for a murre all the way back, but all the large alcids proved to be Razorbills. Unlike last weekend, we didn't have to contend with any fog, so I don't think we missed much on the return trip. We had a decent flock of gulls eating our chum for most of the day, but sunny days aren't the best for skuas, and we never caught a glimpse of one all day. There might still be a few Great Skuas around, but our next crack at them will probably be several months away.
I would like to thank everyone who came out with us on this trip, and I hope you will be back soon. As usual our crew was top notch and on this trip it included Kate Sutherland, Ed Corey, and Steve Backus. Our next trips will be in early May. See www.seabirding.com for a list of available dates from May to October.
March 6, 2021 Species of Interest
Dovekie - 41
Razorbill - 518
large alcid sp - 1
Atlantic Puffin - 2
Bonaparte's Gull - 730
Little Gull - 10 adults 1 first winter
Northern Fulmar - 22
Manx Shearwater - 2
Northern Gannet - 90+
Short-beaked Common Dolphin - 2-300
Bottlenose Dolphin - 19
Loggerhead Turtle - 2
Ocean Sunfish (Mola mola) - 3
Hammerhead Shark (Scalloped of Carolina) - 3-4
A couple of Dovekies on the water (Kate Sutherland) 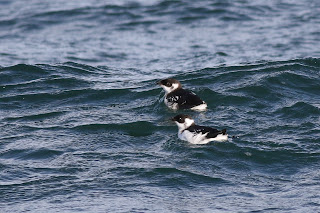 A young Razorbill that gave us some incredible photo opportunities! (Kate Sutherland) 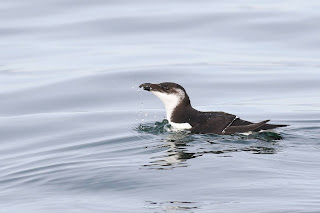 Another photo of one of the Little Gulls (top) with some Bonaparte's Gulls. (Ed Corey) 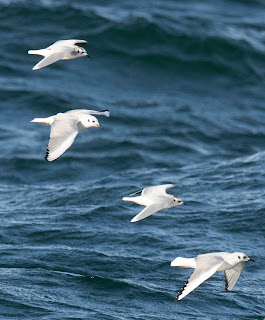 And yes, a few photos of Northern Fulmars!  They put on quite a show for us!  (dorsal view - Kate Sutherland, Ed Corey on the water, Kate Sutherland bottom image) 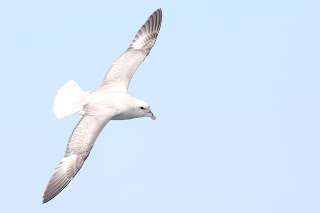 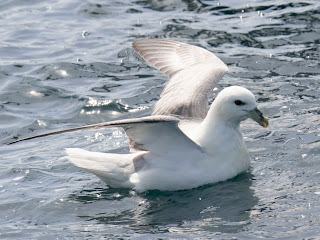 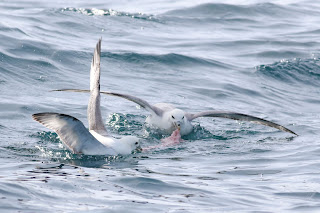 While there were not too many gulls out there, Ed and Steve were able to recruit a fairly nice flock to follow us offshore!  Here are a couple of Lesser Black-backed Gull images by Ed Corey and some of their larger cousins fighting over fish guts by Kate Sutherland. 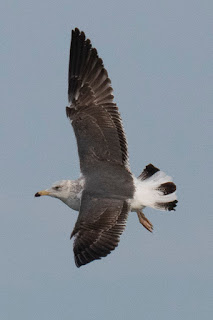 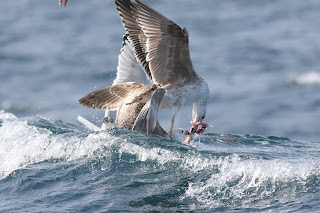 Another awesome image of one of the Short-beaked Common Dolphins by Ed Corey. 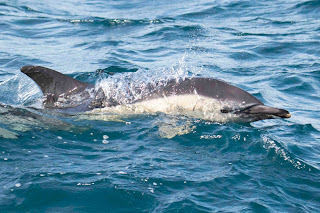 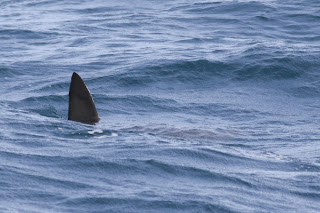 Posted by Capt. Brian Patteson at 7:55 AM