Our first trips of the summer were scheduled for July 30 and 31 and while the weather was perfect leading up to the weekend, the wind breezed up on Friday causing us to cancel the departure on the 30th.  We had a group from Buffalo, NY organized by our friend Alec Humann and we wanted to get them offshore for at least two days...so we planned to go on the 31st and the 1st.  Again, the weather was just not cooperative for two days offshore!  So we made it on one, Saturday, and it poured rain just as we were meeting for the safety briefing.  Boarding was delayed, but finally we were underway by 0610.
A few Royal Terns accompanied us to the shelf break, hunting for flying fishes put up by the boat, but other than those, birds were scarce on our way offshore.  Once we reached the shelf break we slowed and began to chum and the day really took off!  We had Scopoli's, Great, and Audubon's Shearwaters right off the bat and some Wilson's began to gather in the slick.  It seemed like they were hungry, so we began the day with a short drift to see what might come in.  Black-capped Petrels were obliging and since many of our participants had never been offshore with us, there was some excitement when the first individual came in to the slick (Kate Sutherland). 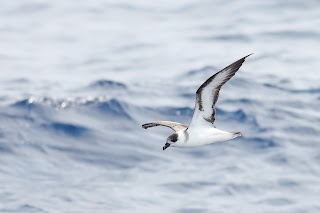 These sleek gadfly petrels were showing off their dynamic flight style and coming close enough for us to see how different they were from the shearwaters, with their narrower wings and short, thick bills, arcing high as they followed the scent from the chum closer.  It took some time, but we finally turned up a handful of Band-rumped Storm-Petrels, though getting a good look at one was not any simple task!  Wilson's were around in good numbers, so after a time the study of these small storm-petrels paid off when one of the longer winged Band-rumpeds flew by the stern (Kate Sutherland). 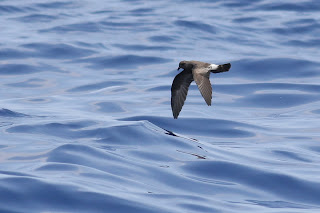 In the afternoon a couple of Leach's Storm-Petrels zipped across the bow and gave us a quick, but identifiable view of this second large storm-petrel species!  A little after 2, we reached the shelf break and picked up speed to head back in toward the inlet.  We were underway when Brian Patteson spotted something off the port bow - a White-faced Storm-Petrel was hopping along right beside us!!!  Wow!  He piloted the boat to keep up with the bird and we were able to keep it in view so that everyone saw it well and we had time to photograph it.  These small birds are not the easiest to capture images of, but we had ample time to get it in our viewfinders and get some in focus shots like these below by leader Ed Corey! 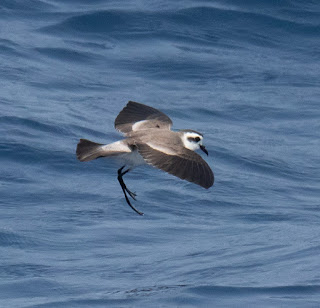 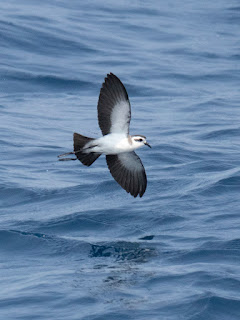 Since we were only able to get offshore for one day, we were super lucky it was as seabird packed as it was!  Thank you to Alec for garnering so much support for these first summer trips of 2021 and to Ed Corey and Andrew Rapp for helping us to lead the trip!
Species List for July 31, 2021
Black-capped Petrel - 23 to 25
Cory's Shearwater - 5
Scopoli's Shearwater - 37
Cory's / Scopoli's Shearwater - 37
Great Shearwater - 17
Audubon's Shearwater - 18 to 19
Wilson's Storm-Petrel - 220 to 250
Leach's Storm-Petrel - 2 to 3
Band-rumped Storm-Petrel - 5
White-faced Storm-Petrel - 1
Red-necked Phalarope - 5
Sooty Tern - 1
Sooty / Bridled Tern - 3
Royal Tern - 1
Whimbrel - 1
Semipalmated Sandpiper - 1
Semipalmated Plover - 1
shorebird sp - 3
peep sp - 1
Bottlenose Dolphin (offshore type) - about 40
Atlantic Spotted Dolphin - 6
green darner - 1
wandering glider - 1
Another angle on the White-faced Stormie (Kate Sutherland) 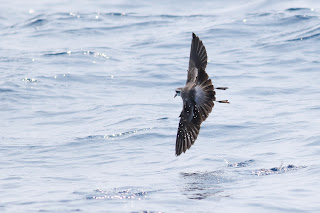 Another Black-capped Petrel image by Ed Corey showing the diagnostic white uppertail that makes them easy to identify at a distance. 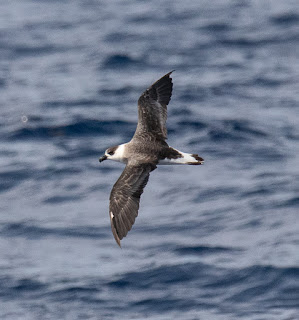 We only saw a handful of true Cory's out there, most of the individuals we encountered were either Scopoli's or we didn't see well enough to tell.  Here is one of the Cory's we saw! (Kate Sutherland) 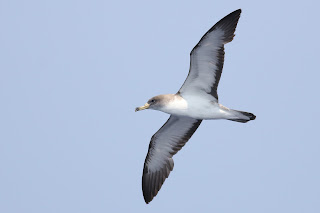 We had some very nicely marked Scopoli's Shearwaters and everyone aboard got to practice identifying these smaller, Mediterranean nesters!  Here is a nice image of one with a lot of white in p10, the diagnostic characteristic of the species.  (Kate Sutherland) A head on view below by Ed Corey showing the small head. 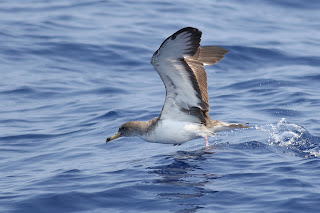 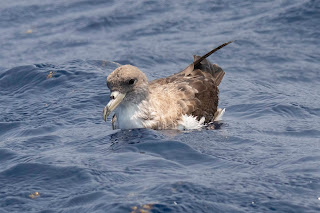 While we didn't see very many Great Shearwaters, the ones we did see came in well to the slick.  (Kate Sutherland) 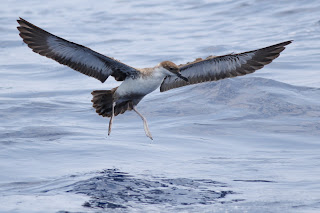 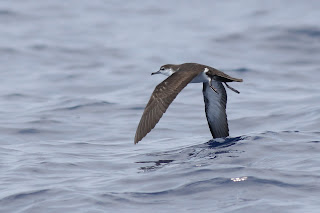 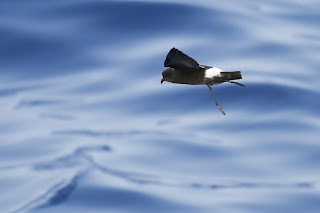 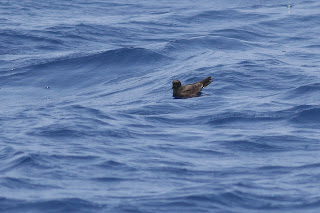 A couple views of the cooperative Bottlenose Dolphins we found out there!  They are always smiling :) (Kate Sutherland) 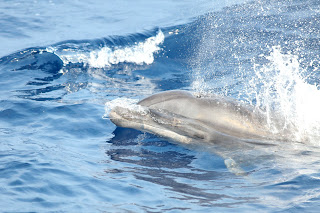 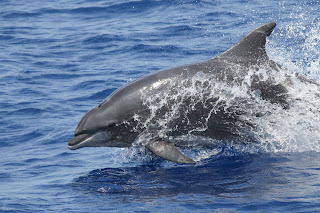 We found a little school of Mahi mahi and harvested a few for dinner.  While Andrew was helping everyone with that, I dipped some sargassum for us to sort through for critters.  We found a Sargassum Crab (Portunus sayi) and a number of shrimp, the species pictured below is the brown grass shrimp (Leander tenuicornis).  A huge thank you to participant Alex Huryn for contributing these photos! 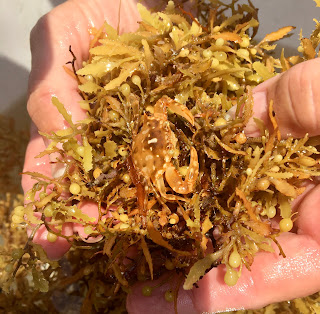 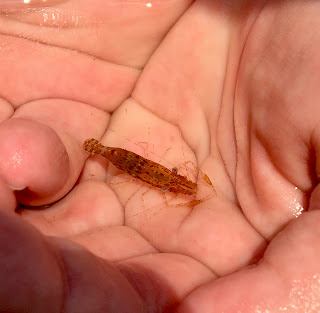 Posted by Kate Sutherland at 9:54 AM