No two days offshore are ever the same, and this was abundantly clear on our trips this week! Tuesday’s weather consisted of a stiff wind out of the southwest, keeping our tubenoses in the air most of the day. Once over the shelf break, we found a good feeding flock of shearwaters in amongst the fishing boats. Lots of Greats and Audubon’s were foraging in and around the patches of Sargassum, with a smattering of Cory’s in the mix as well.  A Royal Tern checking out the action brought in a feisty Parasitic Jaeger, leading to a hot pursuit and the tern losing its dinner to the aerial pugilist! (Kate Sutherland) 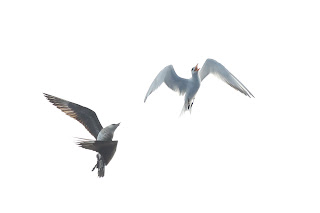 After establishing our chum slick and heading towards deeper water, we were able to eke out a nice following of Wilson’s Storm-Petrels. These small seabirds breed around the Antarctic coast, and are one of the most abundant bird species in the world, with an estimated 50 MILLION pairs. In contrast, the Band-rumped Storm-Petrels we observed later in the slick were larger, with longer wings and a more powerful flight. We were able to see both the Grant’s (larger birds, with obvious primary molt in late Spring) and Madeiran (slightly larger than Wilson’s, mostly fresh in June) types, which each breed in the Northern Hemisphere. Once considered a single species, there may be as many as 8 types of Band-rumpeds in the Atlantic alone.  (While this individual looks fresh, it actually has an old outer primary and is just finishing primary molt!  There is still a lot to learn about Band-rumpeds offshore from NC.  Kate Sutherland) 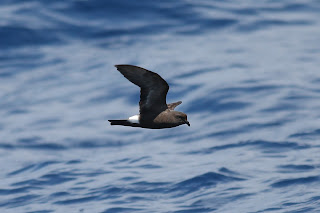 One of our leaders spotted a small flock of birds towards the horizon, with a few tubenoses underneath, and some terns working overhead. After a bit of a chase to catch up to them, the terns revealed themselves to be Bridled Terns. These smaller tropical terns often patrol around the grass-lines, resting on any floating structures they can find. The trio decided to make a few close passes by the boat, giving all on board great looks! (Kate Sutherland) 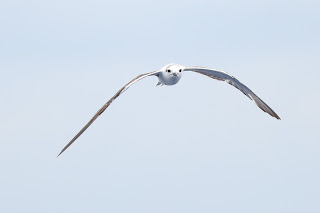 Shortly thereafter, Kate spotted an outline at the surface, which turned out to be one of two White Marlin! These medium-sized billfish were working slowly along near our slick, with only the dorsal and tail fins visible. The dorsal fin of a White Marlin has a rounded aspect, versus the pointed dorsal of the much larger Blue! (Ed Corey) 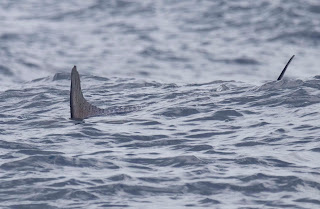 In contrast, Wednesday’s conditions were mostly calm, with some swell, but not much chop to be found. The low, rolling seas made for excellent cetacean watching, beginning with a few bow-riding Atlantic Spotted Dolphins on the ride out. We were able to again find a familiar gathering of shearwaters near the grass-line, as well as several small pods of Offshore Bottlenose Dolphins.
A little before 930, one of the passengers mentioned they had a large dolphin off the port bow. As the animal surfaced again, the distinctive coloration and head shape made us realize that this was a Cuvier’s Beaked Whale! This species currently holds the record for the deepest dive of any mammal, at over 9,000 feet! They also have the record for the longest dive, at well over 3 hours! (Ed Corey) 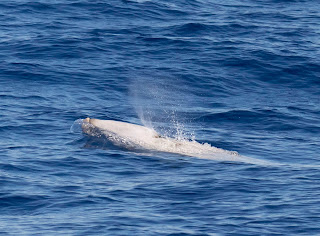 As we powered offshore, we picked up more Wilson’s Storm-Petrels and a few Black-capped Petrels, the latter giving decent passes, but not really settling into the slick as they often do. We were able to get a few glimpses at some Grant’s-type Band-rumpeds, but these, too, were not interested in sticking around for long.
A little after 11, another passenger spotted a low, “bushy” blow off of the stern. As more eyes got on it, we could see that the blow was only coming out of the left side of the head: a Sperm Whale! This individual stayed at the surface for several minutes before disappearing below the surface. (Ed Corey) 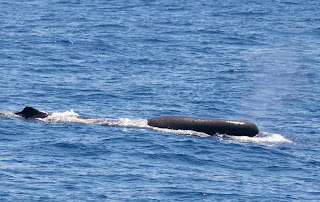 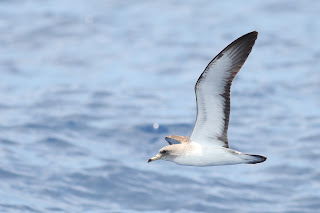 Not to mention the Great Shearwaters!  Once they found the chum they definitely stuck with us for awhile!  (top Kate Sutherland, bottom two Ed Corey) 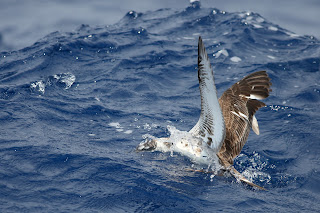 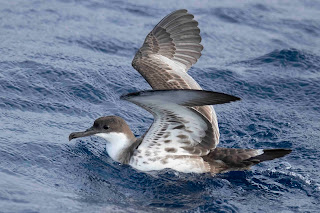 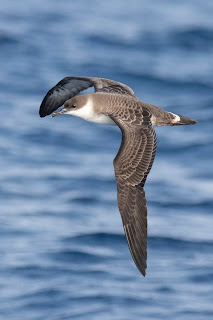 We saw a lot of Audubon's Shearwaters this weekend and they were happy to forage for chum in the slick with the Greats, Cory's, and Scopoli's. (Kate Sutherland) 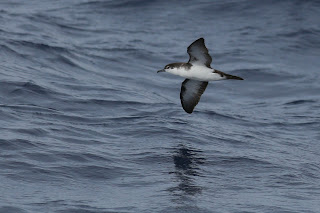 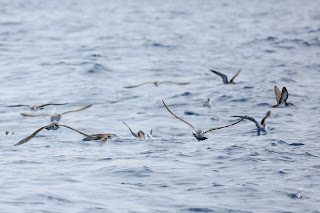 Band-rumpeds were super cooperative in the slick on Tuesday and anyone who wanted to study them certainly had the chance!  (top Ed Corey, bottom two Kate Sutherland) 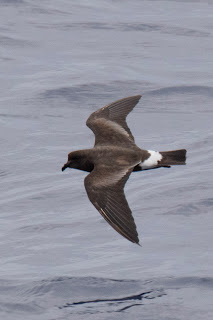 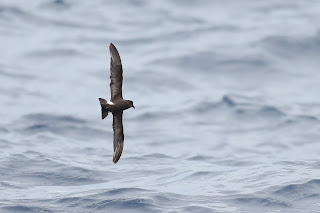 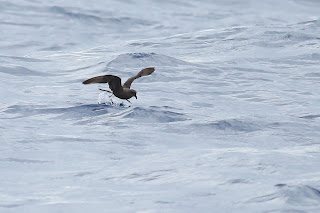 Another image of the Parasitic Jaeger from Tuesday (Kate Sutherland) 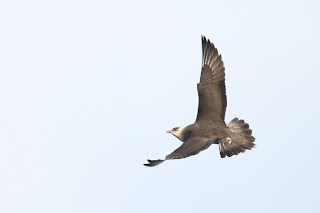 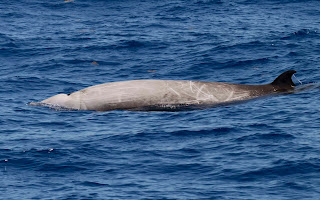 Posted by Kate Sutherland at 3:44 PM