Weather again!  We had storms and high winds move through on Friday June 4 causing us to cancel the trip scheduled for that day, the following two days were suitable, however and we made it out there!  Both days life was a bit farther offshore from the shelf break than usual, but we were able to find and have great looks at a number of seabirds if you were with us for both trips.  No matter how many times we say it, people still think they can see it all on a single trip, and while we have those days, anyone who joined for both trips this weekend had a nice, solid list of seabirds to show for it!
Winds were southwest, our typical wind direction here in Hatteras, but usually we have some Gulf Stream current offshore in conjunction with that wind, working to keep the waves a bit smaller than they would be without that current moving in the same direction.  Saturday we didn't have much current, which was nice because the breeze made the sea a bit choppy and we also had some clouds and weather around - all good things for making seabirds fly and for making our chum interesting to them!  Saturday was strictly a tubenose day, we didn't see any terns or jaegers out there, but had a solid list.  Great Shearwaters were super attentive in the chum and we had some followers for most of the day. 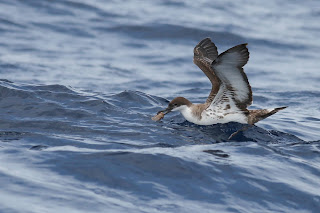 Cory's are here and in addition to the Atlantic breeders we also saw at least three of the Mediterranean species, Scopoli's Shearwater!  Audubon's were zipping around and we had enough pass closely by for everyone to see these small black and whites with their long tails and pale faces.  We were even lucky enough to have a Manx Shearwater fly up the slick and away so everyone in the stern could see how different from, and similar to, Audubon's they really are!  While Wilson's Storm-Petrels were not around in high numbers, we had our fair share in the slick and as usual they were super helpful for participants to study while waiting to see a larger storm-petrel appear in the slick.  Though they never seem to prepare them for how quickly they move around, flying circles around the Wilson's!  Both Leach's and Band-rumpeds visited the slick on Saturday with nice views of both.  Black-capped Petrels were around but they were not very interested in the chum so didn't come incredibly close, but definitely made some nice passes! 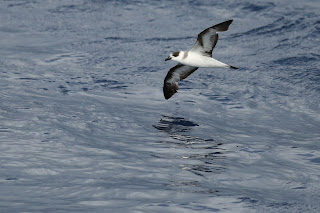 Sunday was a bit different, life was still offshore of the shelf break and it took some time to gather a small following of Wilson's Storm-Petrels, but skies were fairly clear and there was not as much wind.  The Gulf Stream current was closer to the shelf and there were some birds moving on the horizon - Black-capped Petrels were around and we'd only seen a handful before the shout went out from the top deck - "FEA'S PETREL!!"  Todd McGrath spotted this silvery petrel with dark underwings that made a few nice passes around the bow of the boat before angling away.  Photos by Tom Blackman (top) and Douglas Koch (bottom) 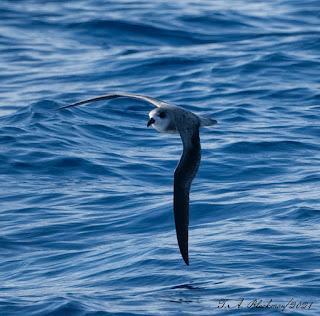 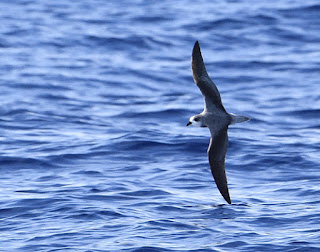 Not a bad start to a day of calm seas!!  A little over an hour later a distant tropicbird was spotted flying high, flight style and photos revealed it to be a White-tailed Tropicbird.  Not the most satisfying views...but no worry...this bird or another appeared above the Stormy Petrel II, as these curious birds sometimes do, less than 30 minutes later! 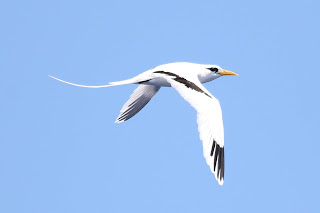 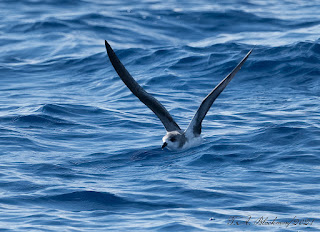 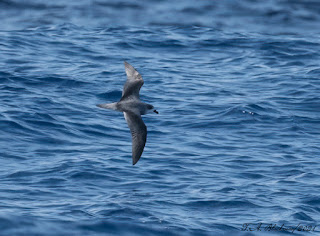 Black-capped Petrels with the ocean texture, we saw mostly dark form or intermediate (pictured below) individuals over the weekend.  Just a handful of light form birds. 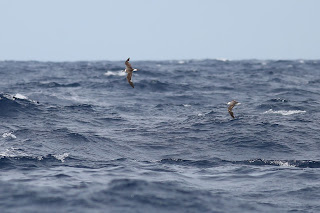 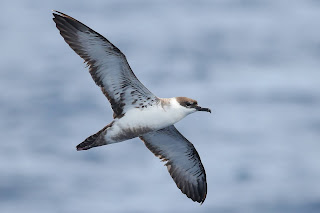 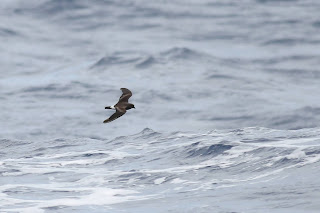 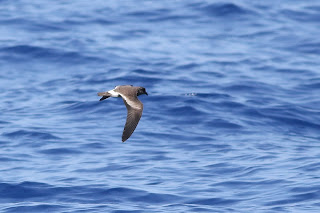 Our second encounter with a White-tailed Tropicbird - close enough to see the Stormy Petrel II reflected in the eye! 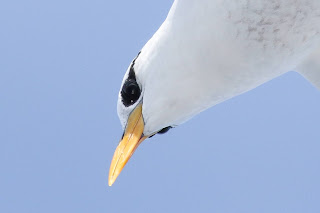 And finally, one of the Long-tailed Jaegers that followed us for a period 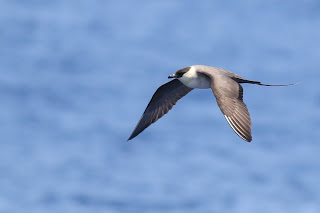 Posted by Kate Sutherland at 9:07 PM