Weather has figured prominently in our trips this spring and these were no exception.  Both mornings we took a little extra time to check the weather offshore and make sure we'd have some company out there (never a good idea to be the only boat offshore when conditions are challenging!), and both mornings we headed offshore.  The weather turned out to be manageable for both trips and we were rewarded with some great shearwater shows in the slick plus incredible views of our signature species, the Black-capped Petrel!  Friday participant Jamie Adams spotted a whale surfacing near the boat and it turned out to be not just one, but three Gervais' beaked whales!  They spent a few minutes surfacing and swimming fairly close to the boat before heading down for another deep dive.  These whales spend most of their time below the surface, feeding on the bottom in very deep water and their genus, Mesoplodon, contains some of the least known species of cetacean due to this behavior. 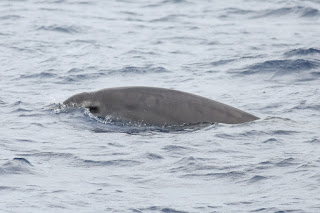 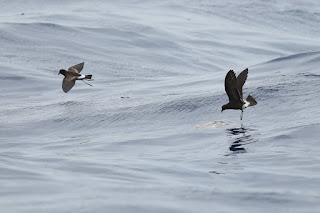 A Leach's Storm-Petrel made a brief appearance as well on Friday, but it didn't stick around and was not very cooperative in the slick.  Shearwaters are HERE!  It was so nice to have shearwaters following us in addition to the Wilson's Storm-Petrels, they were especially cooperative on Saturday.  All of the feeding activity attracted a Pomarine Jaeger who came to check out our flock and harass some of the shearwaters, a Sooty Tern that flew right up the slick to see what we had to offer, and a Laughing Gull that fed with the shearwaters as we approached the shelf break in the afternoon.  It was a super productive day for power chumming!  With the shearwaters comes the chance to study Cory's vs. Scopoli's and to compare them with the smaller Great Shearwater. 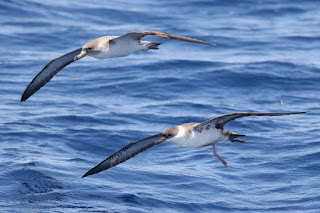 There was also the chance to study Black-capped Petrels with Great Shearwaters and everyone could see how differently they fly in addition to studying the body shape, wing shape, and the bill differences (if you're curious about this check out the photo gallery at the end of the blog!).  We saw just a handful of the pale morph Black-capped Petrels but they were there, along with our dark morph birds and a number of intermediate types.  Both molting and non-molting Band-rumped Storm-Petrels were seen over the two day set and we had really nice views of at least one "little" Band-rumped which we presume to be the Madeiran species.  Audubon's Shearwaters were here with the Sargassum and the south swell so we had nice views of them sitting on the water, feeding, and zipping by the boat as they do when we have nice winds. 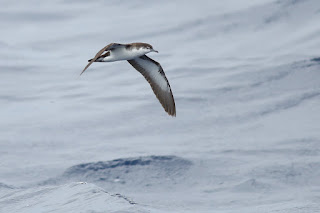 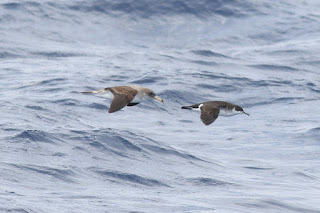 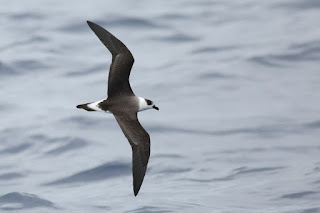 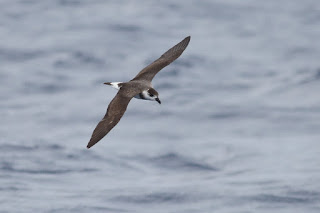 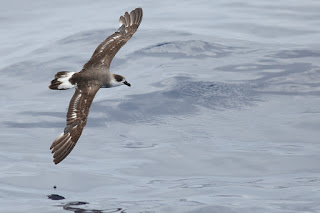 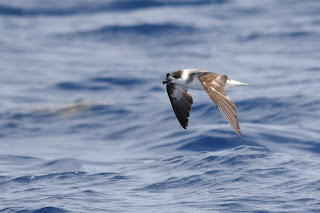 Many guide books list Black-cappeds (L) and Great Shearwaters (R) as a confusion pair - we had many opportunities to study these birds together on Saturday's trip.  You can see the difference in body shape and size, also the wing shape - Black-cappeds have narrower wings and Greats broader wings that they hold differently.  The bills are short and thick (BCPE) vs long and thin (GRSH).  Though when coming toward the boat head on in the slick, it might take a minute to figure out which species you have! 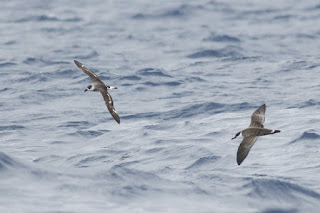 Here we have Cory's Shearwater (top) versus Scopoli's Shearwater (bottom).  You can see the dark underprimaries in Cory's versus the white extending into the visible outer primaries in Scopoli's giving the white a rounded versus pointed shape in the underwing at a distance.  These birds overlap in size and can be difficult to distinguish if you don't have a large Cory's or a small Scopoli's.  It is best to get photos to reinforce your identification if possible.  Saturday we had a number of smaller, likely female, Scopoli's feeding with Great Shearwaters in the slick - when this happens you can observe that the Scopoli's are even smaller than the Greats!!  Or you can see how much larger the Cory's are than the Greats! 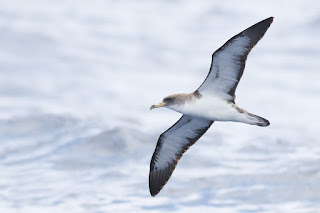 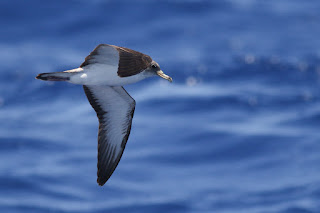 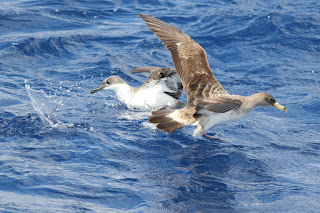 Great Shearwaters were really excellent on both trips and made some close passes in addition to feeding right off the stern on Saturday.  Here you can see the dark belly patch these birds have and also the mottled dark in their underwings. 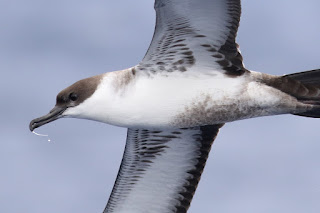 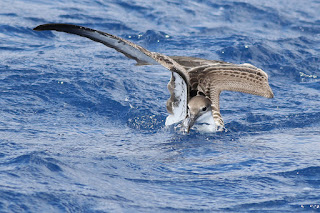 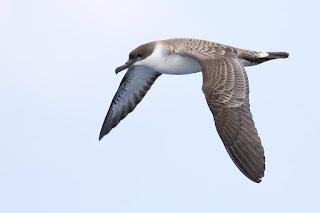 Audubon's Shearwaters were flying around a lot on both days, which was good because the seas made it difficult to see them on the water!  Though we had a chance to observe some sitting on Saturday! 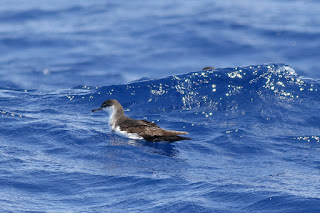 Audubon's are small and have a long tail with dark under tail coverts versus Manx which are a bit larger, they actually weigh twice as much as Audubon's, and have a white under tail.  Typically Audubon's also have a whiter face and Manx show more dark. 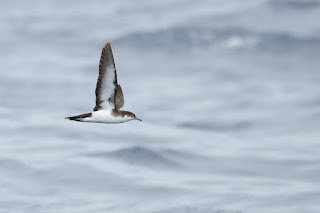 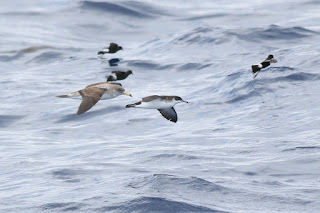 Wilson's Storm-Petrels were also quite cooperative and not only could we hear them at times when we stopped to drift, but we could also see the yellow webbing on their feet! 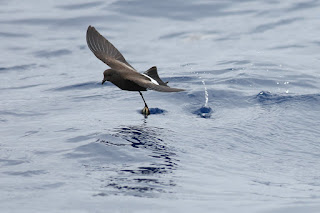 Here are two Band-rumpeds, one molting (top) and one of the non-molting birds (bottom). 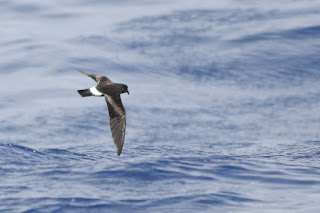 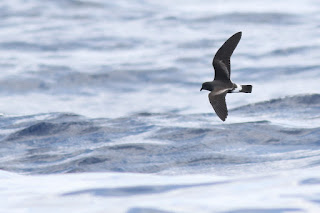 And finally, a few more images of the Gervais' Beaked Whales we saw on Friday's trip!! 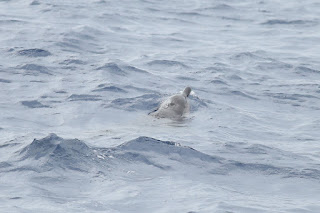 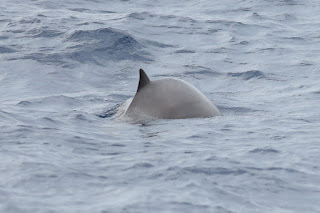 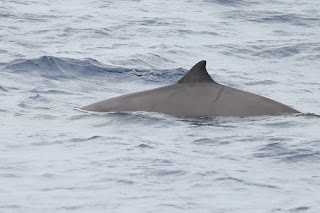 Posted by Kate Sutherland at 8:26 AM