Our last day of the Blitz still held a bit of wind in the morning, from the northeast and skies were sunny as we headed offshore to the shelf break.  The hot, fast Gulf Stream current was offshore a bit farther than usual so we continued running past the break before we slowed and started to chum.  Cory's Shearwaters were on the move and we tallied over 50 of them over the course of the day with at least one Scopoli's that came to feed with the Great Shearwaters in the slick for a bit. 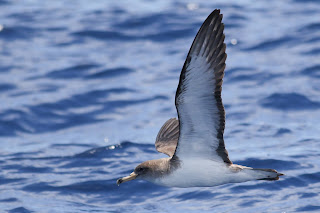 While this individual didn't have as much white in p10 as we sometimes see, it did have a slender bill and was closer in size to a Great Shearwater than the larger Atlantic Cory's that were around!  It was nice to see one following and feeding as they typically do in the summer when we have more offshore here.
We had excellent views of both Leach's and Band-rumped Storm-Petrels, with one Band-rumped (Grant's type) following us up onto the shelf in the afternoon.  Sargassum was here in large amounts, and in the morning we spent some time checking large patches to see if we could possibly turn up a Bridled Tern...and yes! 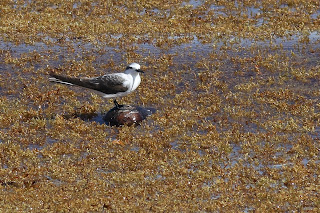 Leader Andrew Rapp found one perched on a coconut ahead of the boat so we were able to get everyone situated to get a view of this first summer bird before it flew.  As we crossed the shelf, passing through a lot of sargassum in the afternoon we turned up a couple more of these tropical terns.  With a lot of sargassum we usually expect to see good numbers of Audubon's Shearwaters, but they just weren't around in any number.  This wind direction is also not the best for Black-capped Petrels, but we did have a few visit us to feed on the chum and they made some nice, close passes!  One jaeger visited our flock in the afternoon, a Parasitic, but didn't hang around for long.
Wilson's came in well, there just were not a lot of them and while we were circling back and drifting at one point, participant James Huntington pointed out a Wilson's with what looked to be white feathering around the bill.  It also had a few white feathers on the belly.  I kept an eye out to see how long this bird trailed us in the slick, but it was a short visit! 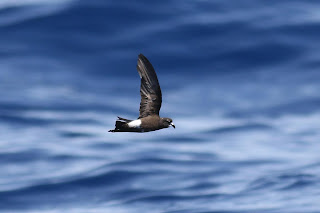 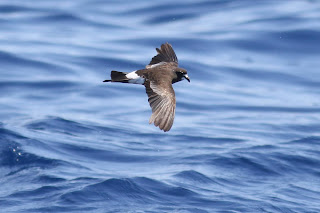 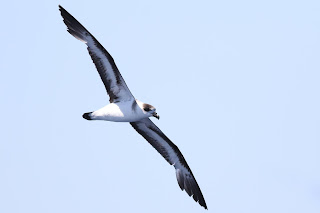 Great Shearwaters were quite loyal to the slick again today and we had up to three following us at once! 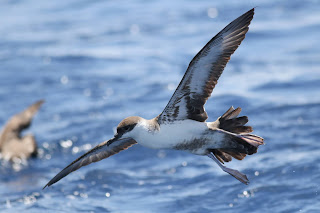 Wilson's Storm-Petrels were really the best at coming close in decent light today!  They were excited about the pieces of chum. 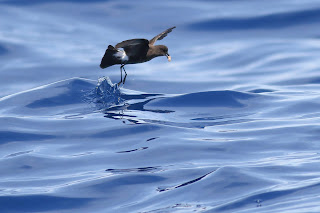 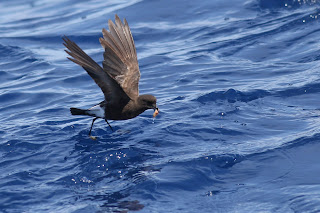 I missed the Band-rumped and Leach's when they were close, we were making sure everyone saw the right bird!  And I think we were successful in that undertaking!  It can be difficult to pick out these large stormies since they fly so quickly, it is tough to follow them.  Our final Band-rumped of the day stayed with us for long enough for everyone to have a chance to study it, however! 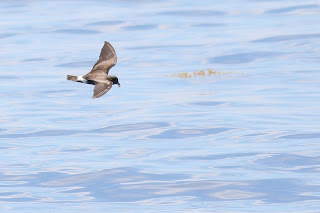 Posted by Kate Sutherland at 6:26 AM