Another beautiful day in the Gulf Stream environs - the actual current is well south of us, so we were in an eddy with little current for the day - still very productive as we headed to the deep!  We had more wind than yesterday, so right off the bat, the Wilson's Storm-Petrel numbers were higher;  plus we had a close Sooty Shearwater on our way offshore in the morning!  Band-rumped Storm-Petrels were seen in fair numbers and the Leach's that were seen flew right by us, alone, for great views.  First thing in the morning Bob Fogg spotted a blow ahead - sure enough, a Sperm Whale was on the horizon and we watched it for moments, getting closer, until it fluked - still a ways ahead of the boat.  Around 1115 Bob spotted a dark bird beating up on some Cory's way back in the slick, I ran back and sure enough, he had a skua back there!  Brian turned us around and we headed back in its' direction...it finally came in and made excellent passes for everyone aboard - a South Polar Skua.  Black-capped Petrels were hard to come by, but at least one flew by close to us;  thank goodness since we had a few people aboard looking for one!  We also had close passes by both Parasitic & Long-tailed Jaegers, just missing a Pom for the day. An Arctic Tern also came in and hovered over the boat before flying off just after 2pm.  On the way home, Brian had heard some reports of False Killer Whales, or Pseudorcas, so we diverted a little and encountered a few of them!  Overall a very satisfying day!

Thanks to all of the California birders who came with Todd & Dave, today was their last day with us.  Thank you too to all who joined us, and to our leaders: Steve Howell, Todd McGrath, Bob Fogg, Dave Pereksta, & Nick Bonomo. 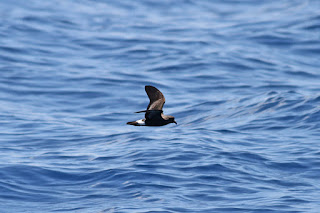 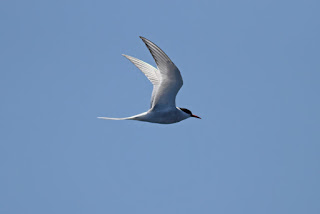 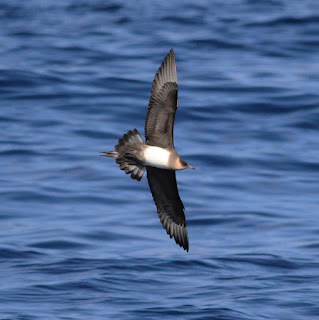 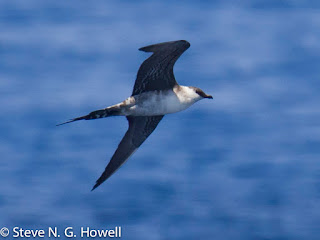 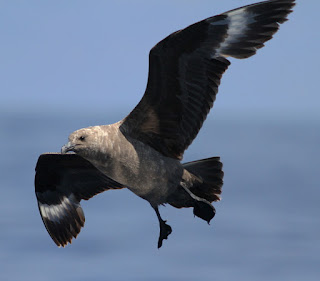 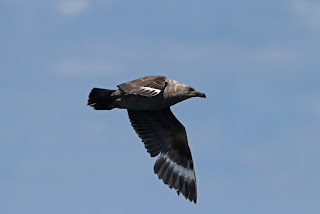 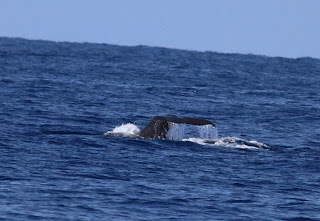 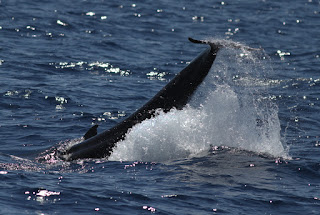 Another shot of a False Killer Whale tail slapping!
One of the many, many flying fish seen today
Posted by Kate Sutherland at 9:39 PM