Yesterday we ended up having to cancel the trip due to remnants of Tropical Storm Andrea.  There were Magnificent Frigatebird sightings up and down Hatteras Island, so many of our participants (& us) were more than happy to be onshore, especially when the winds did not diminish over the course of the day!  We were able to rebook many of our people from Saturday for today's trip so the boat was full when we left the dock this morning at 0538, and still full when we returned!  The inlet and ocean were much calmer than we expected and we headed offshore, encountering no bird life on the way out - not exactly a promising sign.  There was a current edge with a small temperature break in about 600 feet of water, but still no birds.  We slowed and put out a slick attracting three Wilson's Storm-Petrels;  a Cory's Shearwater flew by in the distance.  Soon after 0830, we finally saw an Audubon's Shearwater and our first couple of Black-capped Petrels.  The day just continued to improve as a Pomarine Jaeger flew directly towards us and flew circles around the boat, dropping down to the water numerous times to pick up scraps of fish and shark liver.  We had our first Band-rumped Storm-Petrel before 0930, and while it was a short visit, we had more time with the three individuals in the afternoon and everyone had great views!  While a few participants were looking for rare gadfly petrels, many were new to pelagic birding and were excited to see each species we encountered.  One Great Shearwater even showed up in the slick and obligingly flew around next to the boat with a Cory's.  On the way in just after 1530, Brian saw Kenneth Kelly pointing at something just off the bow - and a young Brown Booby flew right in for a great pass on the starboard side!

Thanks to everyone who joined us today and thank you to our spotters Scott Winton, Jeff Lemons, & Ali Iyoob for helping us out!

I did not have much time to take photos today, but here are a few from the trip - plus one from Brian of the Pomarine Jaeger! 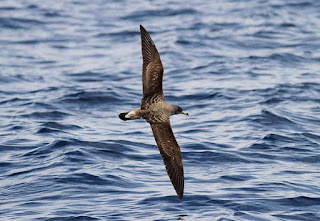 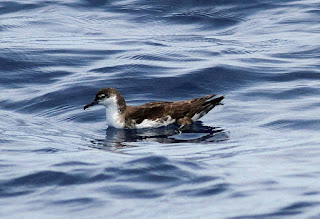 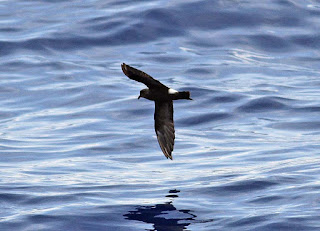 Brown Booby (I made it outside with the camera a little late!) 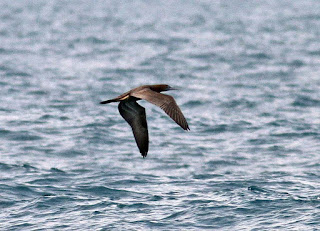 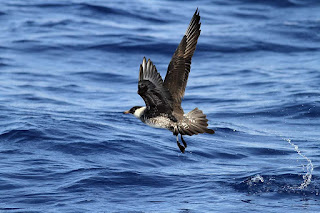