I signed up for the Spring Blitz plus three other trips this year.  Some friends asked if I was crazy, others told me I was crazy.  However, I would not be the first to do it, nor will I be the last.  A year ago, Doug (fashion guru and photographer extraordinaire) set the example for me.  Why did I do it?  My thoughts were that if I missed a trip I would most likely miss a target bird.  I had four targets - Fea's Petrel, Red-billed Tropicbird, Bermuda Petrel, and European Storm-Petrel.  I had no great thoughts of getting all four, but I wanted to at least maximize my chances.

What is it like doing so many trips?  It is early to bed, very early to rise each day.  It is the anticipation of a great bird being called.  It is seeing old friends over the course of the trips and making new ones as you go.  It is knowing that no two days will be the same.  It is seeing the changing of the guard, so to speak.  Sooty Shearwaters started the trip and Great Shearwaters ended the trip.

The first day was very windy and waves were high.  However, the birds were great.  I knew I would be in for a super run when Kate shouted "European Storm-Petrel".  It got even better when she shouted "Bermuda Petrel".  That first day was something.  On later trips I heard spotters describing "Epic Friday" where multiple Bermuda Petrels and a European Storm-Petrel were seen.  I can only say that first Wednesday had to be called "Wicked Wednesday" - Wicked Winds, Wicked Waves, and Wicked Birds (I think 12 Tubenoses including a European Storm-Petrel qualify)!  Day two was when I finally got a good look at a Fea's Petrel, and day four was the Red-billed Tropicbird.  I had figured on at least two life birds, but now I had all four of my targets.

The rest of the trips were spent enjoying all the special birds coming in - South Polar Skuas, White-tailed Tropicbirds, and Trindade Petrels among others.  The views were often spectacular, with birds hanging right over the boat.  I also enjoyed Seabird McKeon's classes on Sargasso Weed.  We had daily sightings of marine mammals and fish to liven things up even more.

I had the privilege of meeting Chloe, the ABA Young Birder of the Year .  I also got to meet the majority of the "700" club, those intrepid birders who have seen 700 birds in one year (Sandy did it twice - amazing).

You always run into birders you know on excursions like this.  I knew Theresa would be on some of the trips, taking time away from her Indiana Big Year.  I enjoyed evening meals with Theresa and Tommy throughout.  Seeing Bill and Kathy was a pleasant surprise.  It was nice to see Chris (a member of the 700 Club) again.  Paul came down from Canada.  Doug, as always, made the trips fun.  Great spotters came and went throughout - Big Dave, Jeff, Todd, Tom, Steve, and the rest.  I met several good birders along the way including John, Jay, Neil, Sandy, Rangel, and a lot of birders from Canada, Minnesota, and England.

I would be remiss if I did not mention that Brian did and excellent job every day getting us to the birds safely.  He just has a sense of where the birds will be and does a very good job of making sure everyone gets on the birds.  How he stayed on the European Storm-Petrel under the windy and wavy conditions was nothing short of amazing.

Last, but surely not least, Kate is the mainstay of the operation.  How anyone can come in every day with a smile and do all the things she does is beyond comprehension.  She is the spotter who called all four of my life birds.  She does the chumming that brings the birds in and also has the unpleasant job of cleaning up after those poor souls (and there were many) who get sea-sick (a problem I have never had - thank goodness).  Above all, she checks on everyone multiple times daily to make sure they are all doing OK and getting on the birds - a concierge without equal.

I would recommend going on as many trips as you can afford or have time for, as that is the way to ensure that you at least have a chance at your targets.  Luck has a lot to do with it as well.  I consider myself extremely lucky to have seen two quality birds on the first day and to have seen all of my targets.  Crazy - yes, four life birds - yes. 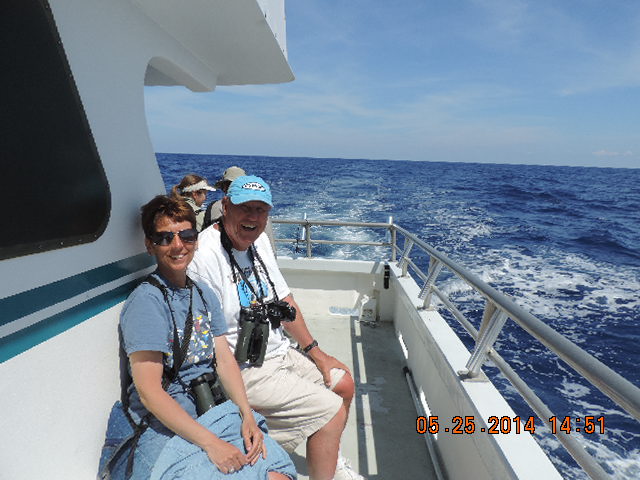 Chris, the author, with Theresa on the Stormy Petrel II - photo courtesy of Theresa Schwinghammer
Posted by Kate Sutherland at 9:30 PM