Part of the reason one day can be different from the next in the Gulf Stream is that streams do indeed flow.  Well offshore there were instances today when the water was moving at 4 knots.  Weed lines, tidal fronts, differing water masses and color changes can be transported from one area to the next somewhat rapidly in the northerly flowing Gulf Stream.

Today we once again departed Hatteras Landing under quite pleasant conditions with light westerly winds and mostly overcast conditions. (sunrise by Kate Sutherland) 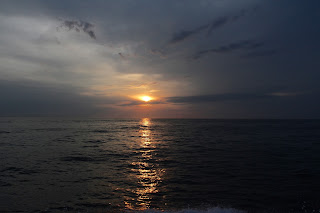 In and around the shelf break we encountered a few Cory's Shearwaters and several Audubon's Shearwaters sailing around a Sargassum Line.  Not nearly as many as we had seen earlier in the week.

A 1st summer Long-tailed Jaeger briefly zipped in towards the Stormy Petrel II for a look at our enthusiastic participants before heading off to the southwest.   Shorty thereafter we began to see our first Black-capped Petrels arcing up on the horizon. (photo by Peter Flood) 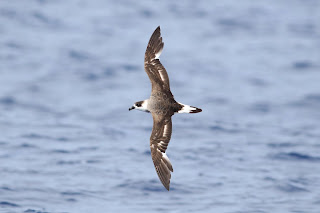 At this point things were quite birdy with shearwaters, petrels and increasing numbers of storm-petrels attending Kate's chum banquet off the stern.  Our second Pterodroma of the day in the form of a Fea's Petrels tacked in towards the boat from the bow and made a nice close pass down the port side to inspect  our chum slick.  The Fea's stayed in view for a couple of minutes showing well and providing long leisurely looks much to the delight of all on board. (photo by Steve Howell) 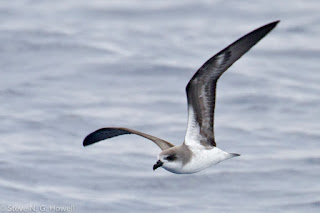 A small pod of Pilot Whales briefly flirted with the Stormy Petrel II followed up by an adult Arctic Tern that spent a couple of minutes off the stern.

A Long-tailed Jaeger returned (perhaps the same bird seen earlier) and was eager to harass three Laughing Gulls which had become far too comfortable feeding off the stern for the past couple of hours.  The jaeger stayed with us for several minutes and was seen well, and photographed well.  (photo by Peter Flood) 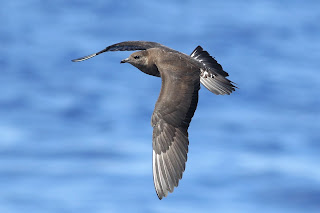 The northerly component of the offshore winds today blowing against the current seemed to provide better conditions for storm-petrels as we had a nice solid following of Wilson's Storm-Petrels with an occasional Band-rumped and Leach's Storm-Petrels zipping through our chum slick. (photo of fresh Band-rumped by Peter Flood) 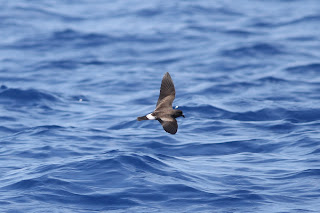 By late morning the winds a slackened considerably providing near glassy conditions over a gentle swell.  A few additional Pilot Whales were seen along with some Bottlenose Dolphins  - a couple of which engaged in some bow-riding in the crystal blue Gulf Stream water.  Looking forward to another and no doubt different day tomorrow!  -Peter Flood

Thank you to everyone who joined us today!  Our leaders also did an amazing job: Ned Brinkley, Steve Howell, Peter Flood, Chloe Walker, and Sage Church.  Peter did an excellent write up & he and Steve once again were amazing photographers!  -Kate 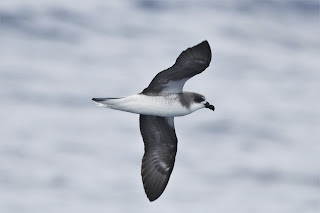 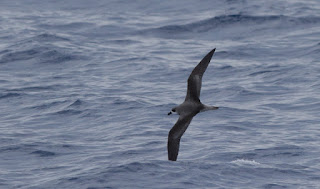 We found some Black-cappeds on the water today, Steve captured this shot of the two types side by side, which could some day prove to be separate species.  (white-faced L, dark R) 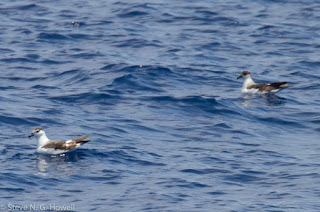 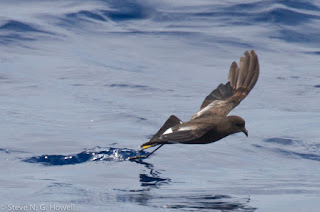 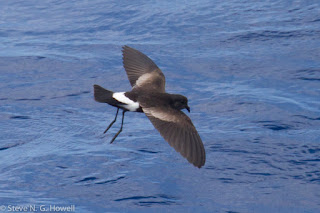 The Long-tailed Jaeger (both photos same bird) as an example of how light in photos can change what you see!  Top looks like 2-3 white primary shafts (typical for LTJA) and bottom the light is reflecting to show what looks to be 5-6! 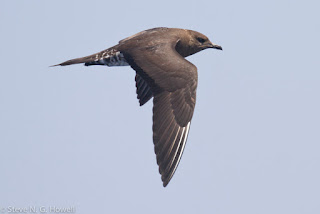 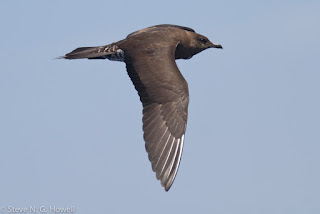 Some photos of the Pilot Whales (Peter Flood) 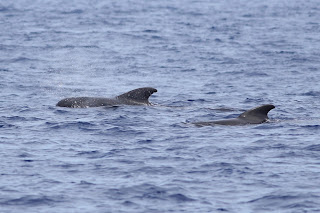 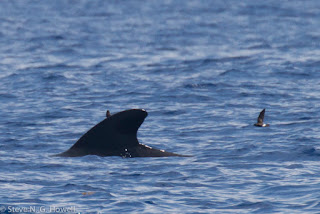