I was not quite sure of what to expect today, as I knew the Gulf Stream had taken a queer turn and we would be looking at different water than what we had been working in the day before. Cloud cover prevented us from getting an up to date satellite image of the offshore waters, so we just had to make a SWAG and head to where we thought the best conditions would be. I wanted to check out the cooler blended water just south of the hard current, and I hoped it would be where we had seen some life the day before in the hot water. We landed in the cooler water about 30 miles south of the inlet around 0800, and by keeping in touch with the charter fleet we were able to figure out where the hot water change was to the north of us. The cooler water was actually about 79 to 80 degrees and the hot stuff got up to 84, which is not what you expect in early June, but the seas have been calm, so the surface water has been holding the heat.

There were a few shearwaters and some Short-finned Pilot Whales in this cooler water, but not too many Black-capped Petrels, so I headed north to see if the petrels were closer to the hot fast water. Along the way, we started to see a few more birds so we slowed down to chum. Within minutes, a Trindade Petrel came in to sniff out the slick. It stayed in view for a while but never came super close to the boat. Nevertheless, we got a few photos and it was nice to compare it to Back-capped Petrels and Cory’s Shearwaters. Photo by Steve Howell 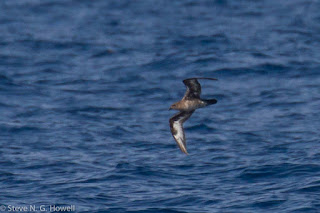 This was our first Trindade Petrel of the year, and I felt lucky to get it as there were so few birds around, but sometimes they appear on slow days. We had both Atlantic Cory’s and Scopoli’s around, but unlike yesterday, no Great Shearwaters. Scopoli's photo by Peter Flood 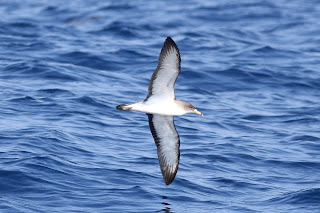 We kept pushing northward closer to the hot water and went through a vast area of scattered Sargassum. There we saw several individual Audubon’s Shearwaters and a couple of pairs sitting together, but no Bridled Terns. The terns are easier to find when the Sargassum is lined up on a current edge and there is enough flotsam for perches. There were a few Band-rumped and Wilson’s Storm-Petrels around, but overall the storm-petrel numbers were quite low. A couple of weeks of offshore wind is not good for finding storm-petrels here, but we did eventually find a Leach’s Storm-Petrel, so we got all three of the expected species for June.

Around midday we were in the hot fast water and I planned to take it up the northeast, but the current was running inshore instead of up the break. It was also devoid of life, so I decided to jog back south where we had seen a few birds and work inshore from there. We found a few birds back in the blended water, but no new species for the day. Our best find for the afternoon was a couple of Cuvier’s Beaked Whales. Photo by Steve Howell 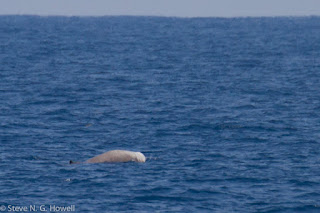 They were distant and sounded before we could get a good look, but the water was fairly shallow for them (around 250 fathoms) so I decided to hang out for a while in the area. They are capable of some long deep dives, but they were up in about 20 minutes. We got a much better look that time, but they dove again before we got really close. The ride back to shore was easy and uneventful. We found plenty of water in the shortcut channel and got back to the dock less than 10 minutes after we left the ocean behind.

Today was our ninth consecutive trip, and I would like to thank our crew of leaders for their unceasing efforts. Today we had Kate Sutherland, Steve Howell, Peter Flood, and our greenhorn, Sage Church. Steve and Pete have headed home, but Kate, Sage and I will be back out on Friday and Saturday and there is plenty of space for others to join us. It looks like we get some northeasterly winds for a couple of day before we start so it should be great birding by the end of the week. 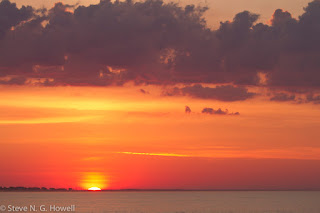 Another record shot of the Trindade Petrel by Peter Flood 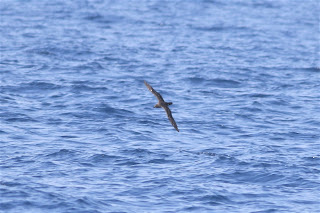 Dorsal view of a Scopoli's Shearwater by Peter Flood 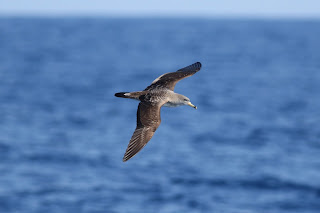 Ventral view of one by Steve Howell 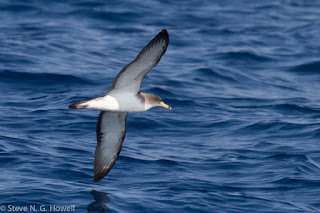 We were able to approach some shearwaters on the water as well, these both looked like they were perhaps the nominate type of Cory's Shearwater (Scopoli's) by Peter Flood 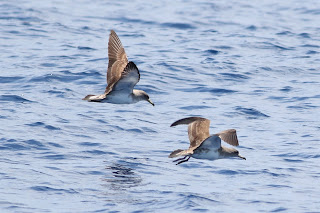 Audubon's Shearwaters were quite cooperative today! 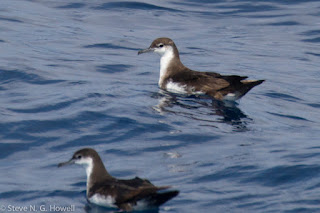 And finally one of the Band-rumped Storm-Petrels from today, photos show it is growing p8, so still finishing molt like the Grant's type - by Steve Howell 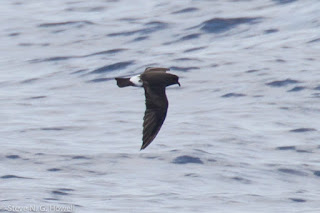 Posted by Kate Sutherland at 3:49 PM