Some days, the Gulf Stream runs like a cobalt river through the green Atlantic, with hard edges and defined boundaries.  Other days, the stream is more nebulous, overflowing its banks and mixing into the surrounding waters.  We never found edges today, feeling our way along by water temperature and the instincts of Brian and Kate.  And that strategy paid off.

Dropping to a jog well before the shelf-break, large numbers of Cory’s, Great, and Audubon’s shearwaters were feeding where the fishing fleet had set up shop for the day.  A small pod of Atlantic Spotted Dolphins confirmed that we were in mixed waters.  As we worked our way through the shearwaters, enjoying the newly abundant Great Shearwaters (photo by Kate Sutherland), 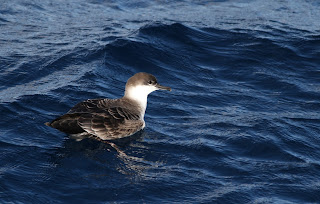 a couple of Bridled terns appeared above the horizon, allowing only brief views.  We worked our way east, started the slick, and started picking up Black-capped Petrels and Wilson’s Storm-Petrels. Kate spotted a Masked Booby flying high above the horizon.

As the day wore on, a few Band-rumped Storm-Petrels joined the mix, with good views of both larger individuals with heavy primary moult, and smaller ones in fresh plumage. (photo of a molting Band-rumped, but without an obvious gap in primaries by Kate Sutherland) 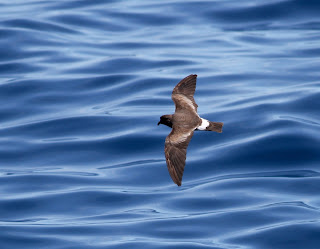 A pair of Offshore Bottlenosed Dolphin came to bow briefly before most people started to eat lunch and reapply sunscreen.  We seemed to be in birds all day, with a constant flow of larger shearwaters, and eventually had a crew of Great and at least one Sooty shearwater following the boat.  A Parasitic Jaeger chased down a Black-capped Petrel alongside the boat, and got people to the handrails, when the call came from the back of the boat “Larger storm-petrel in the Slick”.

Kate came over the radio: “Flying like a Leaches?” I could see the erratic wingbeat of the distinctly larger bird as it went through the Wilson’s, but could also hear the question mark hanging over her statement.  I looked for the chestnut carpal bars of Leaches’ and didn’t find them, they were buffy.  I looked at the rump of the bird as Ned Brinkley shouted “THERE IS NO WHITE!”  The white vanes of the primaries glinted in the afternoon sun.  The boat leapt into action as everyone realized that we were looking at a Swinhoe’s Storm-Petrel, with participants and spotters alike trying to get eyes on the bird.

Swinhoe’s is primarily a Pacific species, but in recent years a very small colony appears to have established on the Selvagen islands North of the Canaries in the East Atlantic.  This is the 5th record for the US, and for North Carolina. (Record shot by Kate Sutherland) 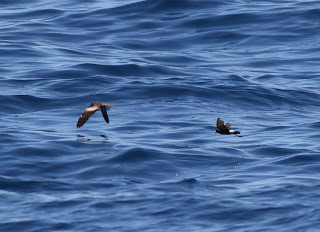 The bird appeared and disappeared 3 times, returning to feed in the slick by dropping onto the water with the wings raised.  Brian and Kate fought to get the boat, slick, and participants aligned for maximal viewing, resulting in everyone getting to see this Mega.

Thanks to everyone who joined us today!  It was an amazing bird filled day out there and we found a Swinhoe's Storm-Petrel!!!  What could be better?  Helping us today were Ned Brinkely, Sea McKeon, Chloe Walker, and Sage Church - thank you!  Thanks to Sea for writing the blog and thank you to Brian & Chloe for contributing a few photos!  -Kate Sutherland

A couple more record shots of the Swinhoe's Storm-Petrel by Kate Sutherland - it was not super close!  But at least we were able to get some photos and more importantly, everyone aboard got it in view! 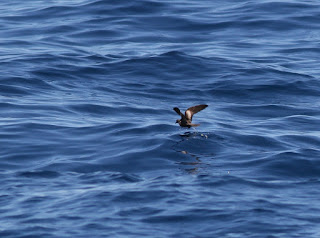 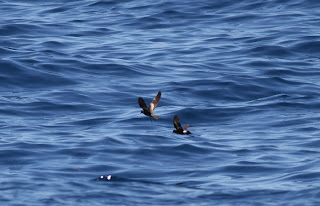 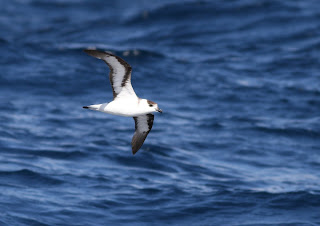 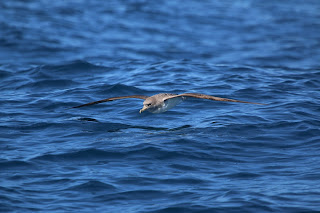 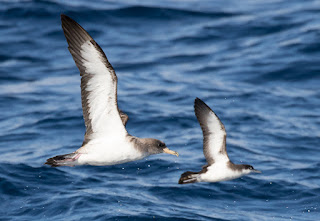 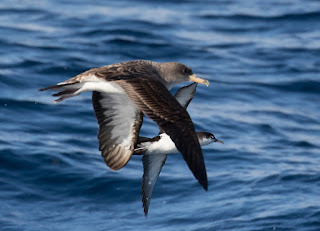 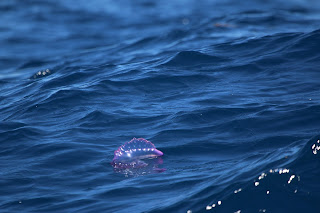