Everyone enjoys seeing boobies, and today was no exception. Add to this some superb marine mammal sightings and good opportunities to watch the different storm-petrel species and it was “just another amazing day offshore” in the Gulf Stream. Conditions were mostly calm with low rolling seas and some impressive, ‘boiling’ white cloud formations, although a southwest breeze picked up in early afternoon to freshen our ride back to shore. The calm seas made for some nice flyingfish on the ride out, here an immature type known as “Purple Bandwing.” Photo Steve Howell 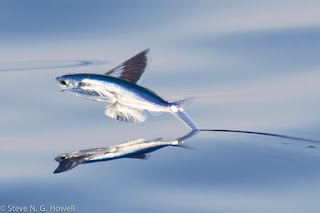 Shortly after slowing down a pod of pilot whales showed well, logging at the surface in the gentle seas. Photo Steve Howell 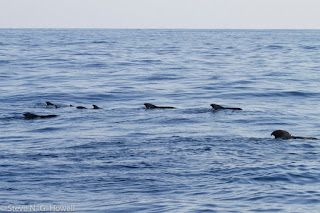 Black-capped Petrels appeared steadily, but with the calm conditions many were sitting on the water, several of them feeding. As on previous days the black-faced type predominated and only a few white-faced birds were seen, here sitting together—the difference is pretty obvious!  Photo Steve Howell 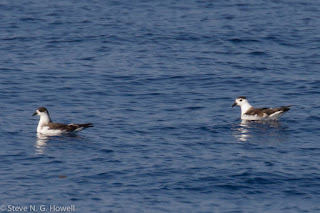 More Black-capped Petrels and a few Audubon’s and Cory’s Shearwaters marked our passage towards to shelf break, before a radio call from one of the fishing boat captains alerted us to a pod of Sperm Whales. We soon found the animals, which were in unusually shallow water and quite tightly grouped—in only 800 feet of water and only 27 miles from the inlet. It looked like a group of mostly young animals and Brian maneuvered the boat to give some excellent views.  Photo Steve Howell 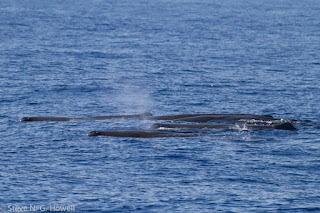 Continuing into the deep blue the storm-petrels following the boat offered some challenging opportunities to pick out Band-rumped and Leach’s from the Wilson’s. For a change of pace, a near-adult Pomarine Jaeger made some nice passes overhead and showed how the ‘spoon-tipped’ tail projections are twisted to 90 degrees and thus can look ‘atypically’ pointed from directly below! Compare these two images:  Photos Steve Howell. 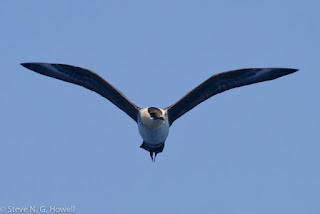 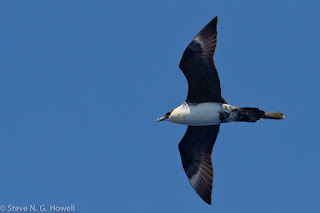 The heat was settling in and things started to quiet down, but then one of our group of visiting Irish seabird enthusiasts shouted “Kogia!” and sure enough three of these rarely seen animals were logging at the surface, although as always they quickly ‘sank’ from view and only a few lucky souls got to see them—thanks Niall! The genus Kogia comprises the Pygmy and Dwarf Sperm Whales, two very similar species of small, poorly known cetaceans. One animal showed a classic Dwarf dorsal fin; the other two were less clear-cut, but presumably also Dwarf Sperm Whales. Photo Steve Howell 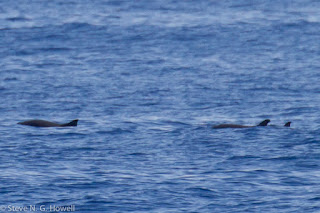 “Larger storm-petrels” (i.e., Band-rumped or Leach’s as opposed to the smaller Wilson’s) continued to appear in the chum slick, and while looking back there several people called out “booby!” and sure enough a nice near-adult Brown Booby flew over the slick and up the starboard side of the boat, although sadly it kept on going rather than electing to come in for a close view.  Photo Steve Howell. 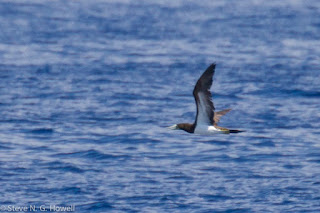 Storm-petrels continued to show in the slick among the Wilson’s, and by the end everyone had seen Leach’s and Band-rumped well—or at least as well as they tend to be seen. Adding to the challenge, a fresh-plumaged Band-rump showed nicely, but not quite close enough to determine whether it was an adult of the summer-breeding Madeiran type (and thus not in wing molt) or a fresh-plumaged juvenile Grant’s type (the winter-breeding population, and the commoner one we see here). Photos Steve Howell. 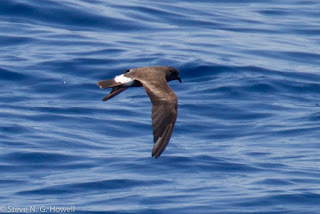 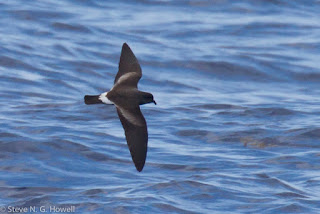 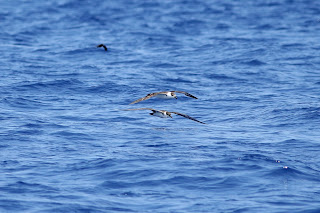 All in all, a really nice day out on the ocean. There’s still room on tomorrow’s trip if anyone feels the desire to get out there (again)...

Thank you to everyone who joined us today!  David Bradford did an excellent job organizing a group that joined us for two trips, plus we had a very keen group from Ireland with us yesterday & today who spotted birds & cetaceans - thanks Niall & Aidan!  A big thank you also to our leaders, Steve Howell, Peter Flood, and Sage Church for all they did to help us out today - we meet at 0515 if anyone wants to join us! (KS) 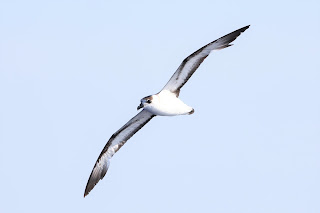 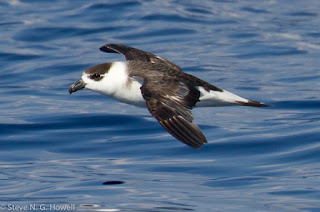 Obliging Great Shearwater behind the boat by Peter Flood 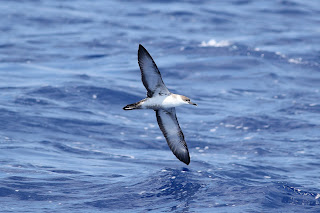 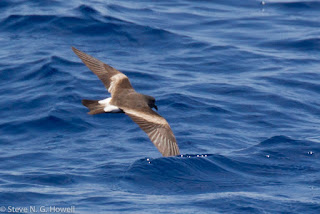 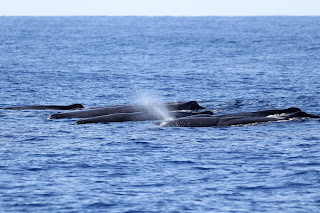 And finally, some closer images of the Pilot Whales, what a treat!  by Peter Flood 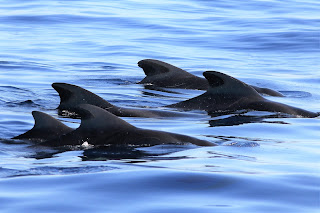 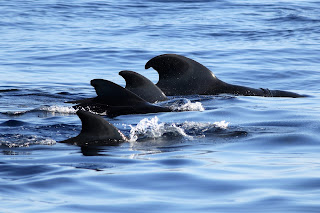