A swell driving up from the southwest combined with a weak current made for a
choppy ride out to the Gulf Stream this morning. Still, winds had picked up from the
previous day, and surely the birds of the deep would be up sailing those currents.

The winged runners didn’t disappoint – our first Black-capped Petrel came to the
boat almost immediately after slowing down just past the shelf break (photo by Peter Flood). 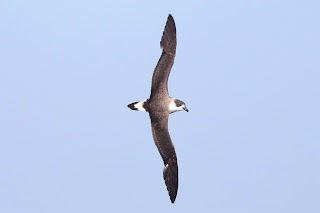 Light but fairly consistent west winds continued through the day, and the Black-capped
Petrels were up and moving and in near constant attendance. Several birds lingered
and fed in the chum slick, and made repeated and obliging close passes at the stern.
Wilson’s Storm-petrels, strung out down the slick, built to flocks of 30-40 birds, and
Band-rumped Storm-petrels regularly cycled through, streaking through the crowd
on their long bowed wings.  (Photo of Band-rumped below by Steve Howell looks like a first summer bird, so likely a Madeiran type vs the molting Grant's type we mostly see) 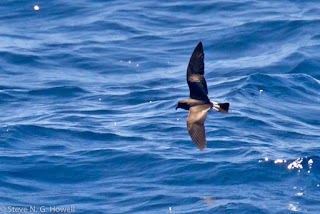 A Manx Shearwater was a nice surprise out in the Gulf Stream water - an atypical
individual where feather wear had created the semblance of an Audubon’s
spectacles (photo by Peter Flood). 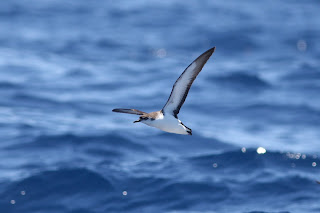 In the afternoon, Chloe Walker spotted a small pod of Risso’s Dolphins. On a break
from their deep dives, the Risso’s lingered at the surface with us for a leisurely time,
though keeping their distance. From the uniquely scarred dorsal fin of one animal,
this appeared to be the same pod seen yesterday. (photo by Steve Howell) 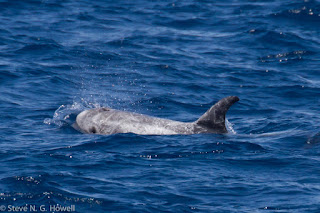 Tomorrow we head out yet again to experience a new day on the Gulf Stream.

Thank you to everyone who joined us today and a big thanks to our leaders Dave Shoch, Steve Howell, Sea McKeon, Peter Flood, and Chloe Walker - Sage Church was also a huge help!!  Thank you to Dave for the blog and Steve & Peter for letting me use their photos here... - Kate Sutherland 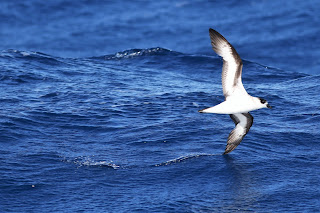 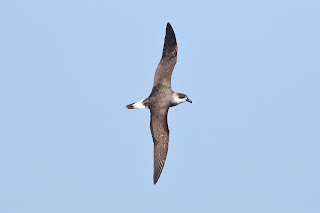 We also had a nominate type Cory's Shearwater, aka Scopoli's, in the slick late in the day.  Steve easily identified it and Peter captured this image. 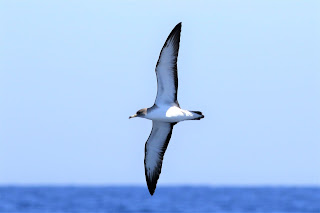 Manx & Audubon's Shearwaters by Steve Howell.  Note the slim body and long tail of the Audubon's (R) vs the heftier build of the Manx (L).  A Manx Shearwater weighs twice as much as an Audubon's, and the difference easily seen in this photo!  You can also see the toes projecting beyond the tail in the Manx and the white undertail coverts vs all dark in the Audubon's. 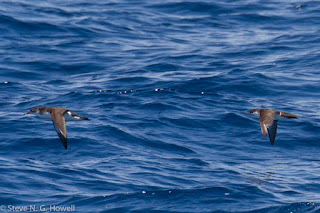 One more shot of the Risso's Dolphins by Peter Flood 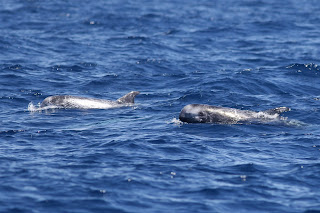 Posted by Kate Sutherland at 9:55 PM