I have always said, and truly believe, that any day you see a Black-capped Petrel is a good day - an amazing day - a special day.  So today was all of that, because we cannot forget how lucky we are to head offshore and pretty much expect to see a Black-capped Petrel, our signature Gulf Stream species.  The persistent westerlies of the past few days really cleared out some of the species we hope to see, but the Black-cappeds were there, 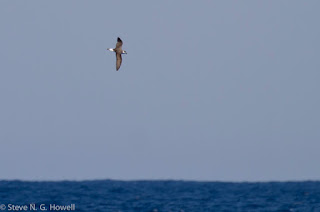 and we saw more of them than any other species, save Wilson's Storm-Petrel!  It was a beautiful day out there, with a bit of breeze from...well, the south west...but there was some grass out in the deep and we did find some beautiful, blue, warm water out there.  While Black-capped Petrels, both types, stole the show today, we did have good looks at a few Audubon's Shearwaters and a Sooty Shearwater that was feeding on the water allowed us to approach closely before flushing! 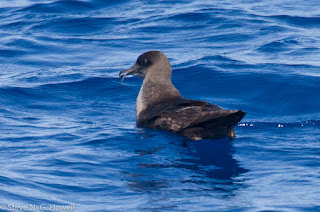 The Wilson's Storm-Petrels came in well to the slick and we even had some pretty nice views of a couple of Band-rumpeds, though they did not make any close passes for photos like they did last Wednesday!  Between 1130 and noon a Cliff Swallow flew towards the boat, coming right in over the stern before moving on, an interesting species to add to the offshore list! 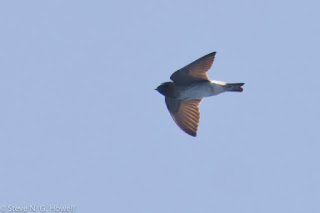 Overall, it was what we would expect to find in the Gulf Stream, the numbers were just a little low.  But tomorrow is another day and we will be out there to see what we can find!

Thank you to everyone who joined us out there, especially those who spent two or three days on land waiting for the chance to get out there!  Thanks to Steve Howell, Sea McKeon, and Peter Flood for helping us lead the trip today!  All of the photos in the post today are by Steve, nice captures! 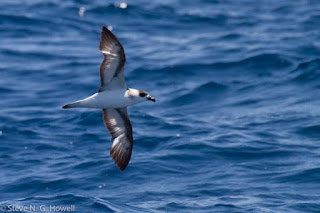 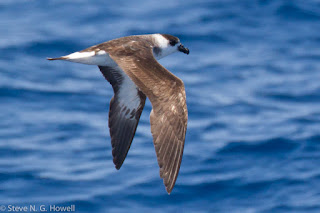 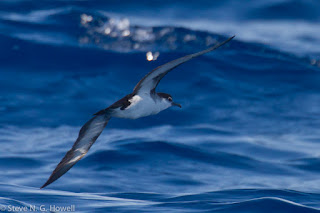 And while there were not many birds out there, we did see a lot of shipping traffic!  Here is the Seaspan Alps with a Black-capped Petrel flying by... 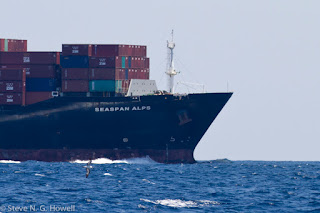 Posted by Kate Sutherland at 8:49 PM