Today was the day of Audubon’s Shearwater.  A bird of the tropical and subtropical North Atlantic, Audubon’s Shearwaters often play second fiddle to the spectacular Black-capped Petrel as the emblem of the Gulf Stream waters, but they share grace, charisma, and endangerment due to cats, rats, and other human-induced ills.  These are small birds.  With a wingspan of only 65-74 cm, they could sit comfortably in your outstretched hand.  Boldly patterned in dark brown and white, they share a general appearance with their heftier, cold water cousins, Manx shearwater, but Audubon’s make a living fishing under floating mats of pelagic Sargassum, and breed from the Bahamas to coastal Brazil.  Today we saw more Audubon’s shearwaters together than have been seen in open water for decades (photo by Dave Shoch).

Dropping to speed from the run offshore, we knew immediately the conditions had changed from the last few days.  Cory’s and Audubon’s Shearwater surrounded the boat, soon joined by a few Black-capped Petrels and Wilson’s Storm-petrels.  A group of Atlantic Spotted Dolphins rode the bow-wave for a few minutes, as numbers of birds steadily increased.  As we watched the shearwaters feeding, two Long-tailed Jaegers appeared above the flock- an adult and a first summer individual.  As we skirted the edge of a thunderstorm, the numbers of Audubon’s climbed, feeding above football sized Skipjack Tuna.  Closer and closer until the cry went out “MANX!” and the race was on to find Manx Shearwaters hidden in the wheeling flock (photo of Manx & Audubon's by Steve Howell). 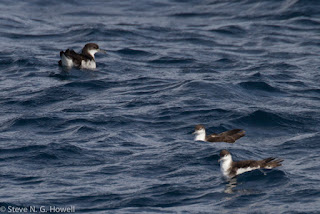 Small numbers of Great and Sooty Shearwaters joined the whirling flocks of Audubons, raising May 30th 2017 to a five shearwater day.  Mysterious flocks of shorebirds passed overhead. Even a Bridled Tern joined the flock, dipping at the surface in shallow U-shaped dives.
Lightning striking nearby deterred few from standing out on deck and watching the edge of storm for birds to be pushed our way, followed by a drenching rain.  As the last drops fell, raincoats came off, and the search was back on, with participants going from having never seen a shearwater to separating Audubon’s from Manx, Atlantic (Cory’s) from Scopoli’s Shearwaters (photo by Peter Flood). 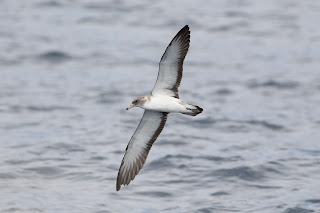 Heart rates were raised as a hooded Pterodroma petrel made a close pass at the starboard of the boat, leaving everyone wondering if it was a Bermuda Petrel, an unusually dark Black-capped Petrel, or something even stranger.  On review of the photos at the end of the day, it appears to have been the same dark individual we saw two days ago.


As the day wore on through high sun, we stopped to examine a patch of Sargassum well offshore, examining the complex community of small creatures that live with the floating ‘weed’.  Band-rumped Storm-petrels made short forays into the slick, with both Grant’s and Madeiran types identified by moult timing.  We were 28-30 nautical miles away from shore when once again we were surrounded by large flocks of Audubon’s shearwaters.  Hundreds of individuals would rise from the water and resettle in large discreet flocks.  Many appeared to be juvenile birds.  We ended up counting some 585 individual birds before we had to turn back towards shore, awed that we had just seen more Audubon’s shearwaters than had been seen at sea since the 1990’s.  Offshore Bottlenosed Dolphin (photo by Peter Flood) and a Hammerhead shark (photo by Steve Howell) put in appearances for the trip back to the dock, rounding out a remarkable day offshore. 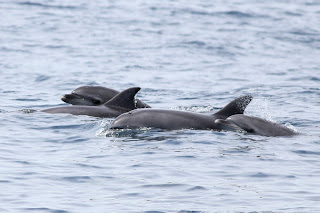 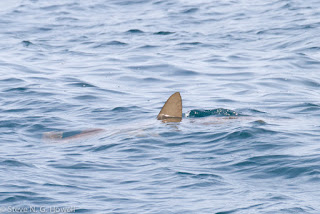 A huge thank you to all of our participants today & thanks as well to our leaders: Dave Shoch, Steve Howell, Sea McKeon, Peter Flood, & Chloe Walker!  Thank you Sea for writing this wonderful and informative blog post, and thanks to Dave, Steve, and Peter for the photos!  Here is a photo of Peter Flood in an awesome Black-capped Petrel shirt from Sea! 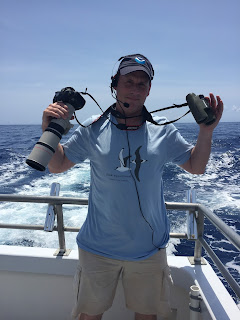 Check out his website: http://code5design.net/ & use the coupon code "Offshore 2017" for a discount on your purchase!! 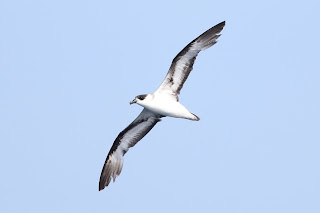 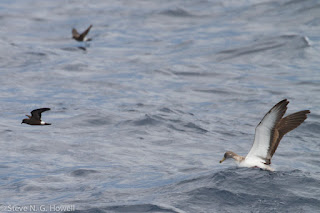 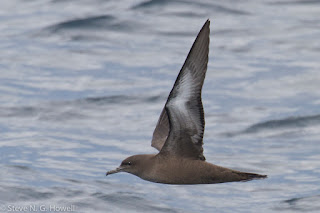 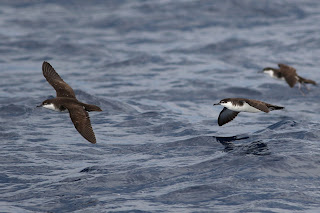 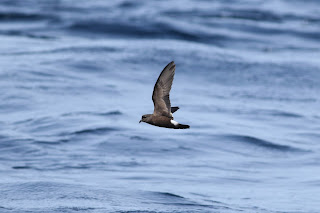 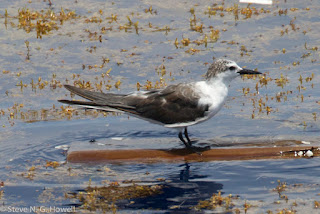 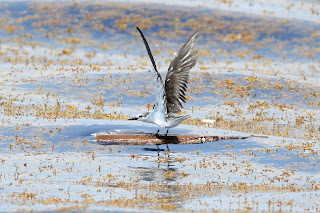 There were some flyingfish out there today as well!!  We found the warmest water we have seen so far this spring - Atlantic Patchwing (Steve Howell) 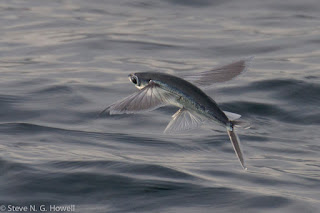 Posted by Kate Sutherland at 9:58 PM