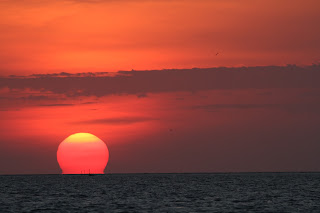 September was our last pelagic trip on the Stormy Petrel II and that seems like an eternity ago!  This morning was the maiden seabirding voyage with the new engines, and they are a world apart from what we had before!  The boat is so much quieter, and more efficient than ever, Brian even gave the safety briefing with the engines running this morning, and we could hear him!  While we were excited to get back out to the Gulf Stream, we were not sure what might be in store since the wind had quite a large westerly component to it this morning and it was too cloudy for an image of the sea surface temperature.  Though some of our participants had seen a Sooty Shearwater from the beach yesterday, we did not find any seabirds close to shore this morning.  What we did find was a nice Manx Shearwater between 0730 and 8!  This bird flew up the starboard side of the boat and made a really nice pass so everyone could see the heavy build and white undertail.  Shortly following, we had two more slender and long-tailed Audubon's Shearwaters fly by, just inshore of a nice temperature break with a grassline - a perfect comparison.  We paused there for a bit and picked up another Audubon's or two and a Bridled Tern that flew directly away from us leaving many unsatisfied.  Just a few minutes later as we headed offshore, another came right in to the boat - nice views!  A Cory's was seen in the distance and we later had an excellent view of this large shearwater crossing the bow.  Wilson's Storm-Petrels started packing in behind us once the fish oil was flowing and we had a nice little flock of them for most of the day, no other storm-petrel species were seen today. 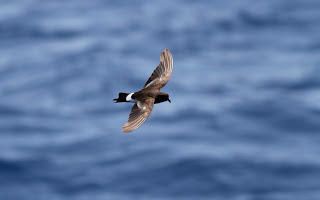 Black-capped Petrels were initially uninterested, not passing very close to the boat, but our signature species did not disappoint today - by the afternoon we had Black-cappeds flying right up the slick to the boat and making some awesome passes! 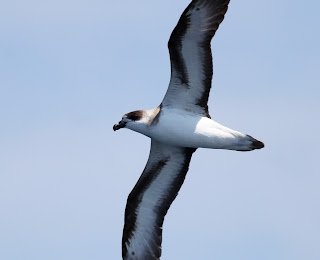 Just after noontime, right about the time we turned back inshore, one of our participants spotted a Pomarine Jaeger flying toward the boat, it flew behind us and headed on away, not taking a second look at us.  About an hour and a half later, a Sooty Shearwater flew in to check out our frozen chum and it decided to stay and eat awhile...following us for almost an hour!  It put on quite a show when we first encountered it, flopping down on the water to feed and then diving repeatedly to secure bits of fresh frozen fish from the chum block! 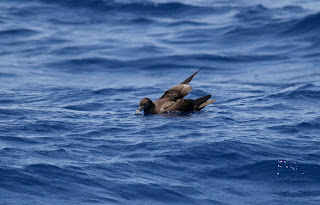 Just after we hit the shelf break again in the afternoon, along the color change, we found three more Bridled Terns flying together!  Then another!  As Brian pointed out, we probably saw more Bridled Terns today than we saw in total last spring - but with southerly winds like we've had leading up to the Blitz, those, and the Audubon's, are easier to find!  While the numbers today were not very high, we ended the day with a really nice species list, and any day you see a Black-capped Petrel is a good one (I think)!  The birds were all very cooperative as well with nice views of each species.  It was so nice to be back out there in the swift waters of the Gulf Stream where you never know what will turn up next!  We had a nice front move through late this afternoon, and the winds have shifted to the north, so tomorrow will be different, and hopefully we'll find another species or two to add to the Blitz List...

Thanks to everyone who joined us today and to our leaders: Ned Brinkely, Lev Frid, and Ed Corey
A big thanks also to Captain Brian Patteson for all of the hard work he has put in over the past 7 months getting the new engines installed, making sure everything was perfect, and getting our new and improved Stormy Petrel II ready for a work out this spring!
(Photos today are all by me, Kate Sutherland - I spent more time looking than taking photos, so apologies for the slim selection!)

I love this angle on Black-cappeds 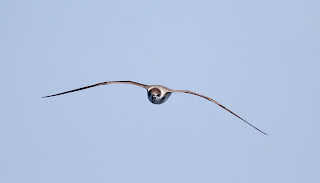 Here is an image of one of the few white-faced individuals we saw today.  Most that came close enough to check were intermediate or dark faced birds. 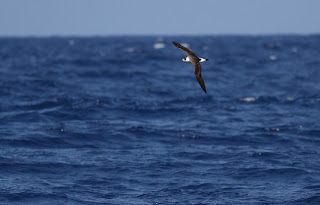 One more image of the Sooty Shearwater 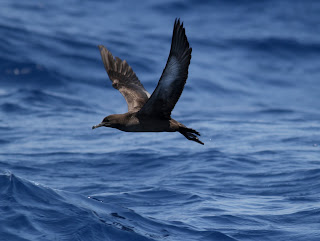 Record shot of one adult Bridled Tern from the afternoon 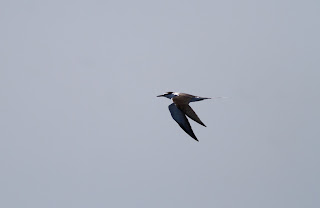 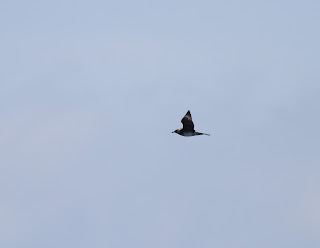