When it comes to seabirding I have learned, over time to expect the unexpected.  In fact, I'll always remember my college Ecology professor stating "exceptions don't prove the rule they probe the rule".  Over the past week there were more than a few folks that have asked...."can we have a good day offshore with these persistent westerly winds"? My response has been of course! Because everyday is a different day along the edge of the dynamic ecosystem we call the Gulf Stream.

Twenty intrepid birders and Captain and crew of the Stormy Petrel II steamed out of Hatteras Landing under delightful conditions with a soft gray overcast and light westerly winds.  Shortly after reaching the shelf break we found an active Sargassum line where we encountered feeding Skipjacks chasing smaller bait fish and attendant flocks of Audubon's and Cory's Shearwaters. A Bridled Tern was discovered sitting on some flotsam within the weed line (photo by Peter Flood). 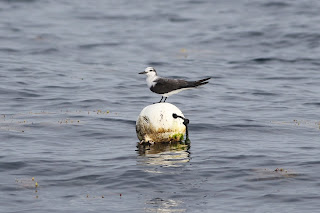 This tropical tern flushed and was briefly joined by a second tern that briefly circled the boat before veering off to the west.

Further to the east several Black-capped Petrels were arcing up on the horizon and we began collecting Wilson's Storm-Petrels in our chum slick that were briefly joined by our first Band-rumped Storm-Petrel of the day (photo by Peter Flood). 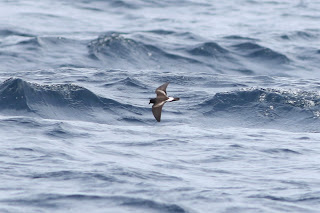 About mid-morning Kate picked out all dark, graceful and slightly unfamiliar seabird inspecting the chum slick.  As the bird came in closer the call went out for Brown Noddy! The bird was seen well by all on board and represents only one of a hand full of sightings off North Carolina of this elegant tropical tern (photo by Dave Shoch). 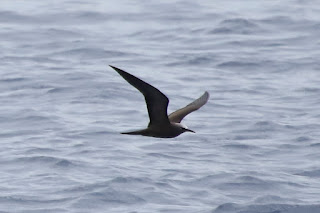 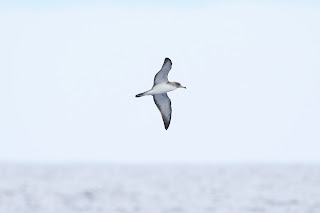 Early in the afternoon distant thunderstorms on the horizon produced a couple of waterspouts which were safely enjoyed from the comfort of the Stormy Petrel II (photo by Peter Flood). 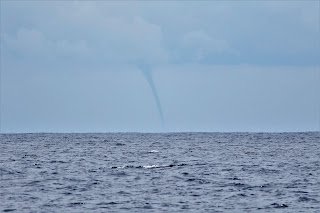 We laid out a final slick in the afternoon to enjoy a Band-rumped Storm-Petrel with the Wilson's and Brian spotted a White Marlin swimming right next to the boat!  Great end to an amazing day...
-Peter Flood

Thanks to everyone who joined us out there today!  And thank you to our leaders: Ned Brinkley, Dave Shoch, Steve Howell, Peter Flood, and Chloe Walker.  Sage Church helped us today as well and a big thanks as always to my blog post author, Peter, and to he and Steve for keeping me in the pictures...! 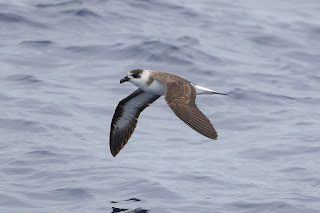 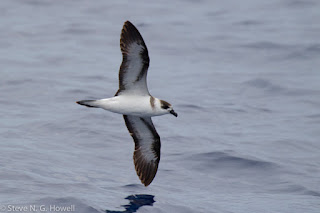 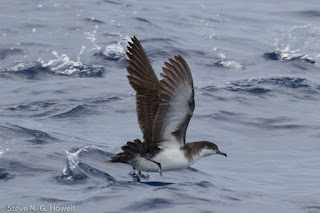 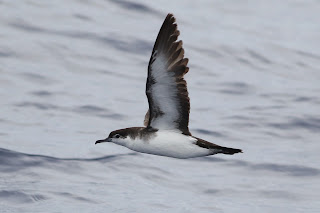 Another view of the Brown Noddy!  (Steve Howell) 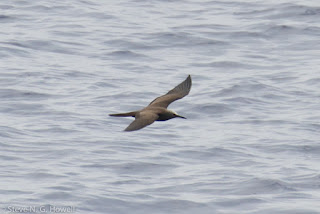 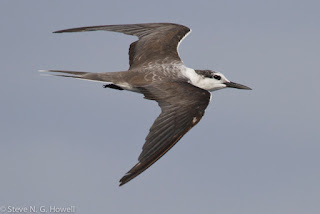 Good night & we will be out there again tomorrow...promise to keep you posted!!
Posted by Kate Sutherland at 9:32 PM