Well, today was unlike yesterday, and will probably be different from tomorrow.  A snappier southerly wind and partly cloudy to overcast skies greeted us upon exiting Hatteras Inlet this morning.  Seas were a bit more agitated today and a noticeably more vigorous southeasterly swell coupled with 4-6 foot waves made for a bouncier ride out to the shelf edge.   A few Cory's Shearwaters and an occasional Audubon's Shearwater kept us company in transit. (All photos below by Peter Flood) 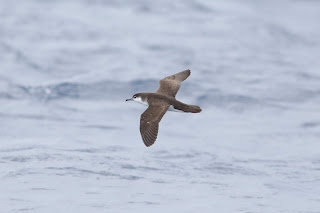 Reaching the shelf edge we set our chum slick and quickly built a loyal following of storm-petrels off the stern.  Leach's Storm-Petrels were a real feature today spending considerable time in the chum slick feeding and making some unbelievable close (un-Leach's like) passes by the boat.  One of the Leach's briefly caused some serious heart palpitations for it possessed a minimal rump patch and at first glance initially appeared to be a "dark-rumped" type storm-petrel. (Photo of the subject Leach's below) 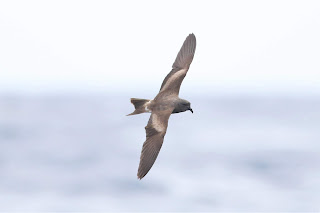 We also managed to tally a few Band-rump Storm-Petrels as well all of which appeared to be a mix of fresh and molting Band-rumps.
An immature Long-tailed Jaeger bullied its way into the slick and began harassing and chasing storm-petrels around in true kleptoparasitc fashion. (Photo below) 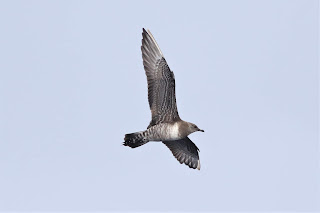 Shortly thereafter we were joined by a couple of Arctic Terns that spent some time feeding in the slick and calling close to the boat much to the delight of all onboard. These extreme long distant migrants that frequent the high latitudes of both hemispheres appeared to be immature terns exhibiting some white speckling on their dark caps. (photo below) 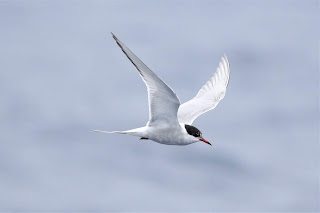 Black-capped Petrels seemed more at ease today than the past couple of days arcing high with confidence all the while making breathtakingly bold passes by the boat.  (photo below) 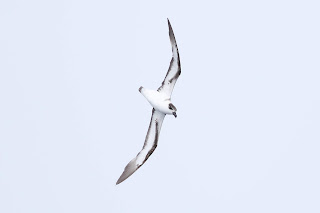 The stray rain showers that were a minor nuisance during our time offshore today were becoming a bit more persistent as it was time to head in.    Prior to steaming northwest back to shore we enjoyed some energized Bottlenose Dolphins that were acrobatically leaping out of the sea and riding the waves. (photo below) 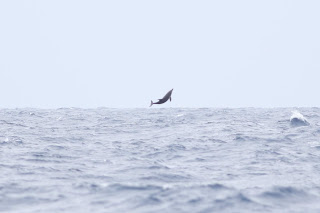 A big thank you to Paul Mayer for organizing a group from IL that came offshore with us today, and another big thank you to all of our trip leaders today Chris Sloan, Sea McKeon and Peter Flood.  Thanks to Peter for writing the blog and contributing photos. 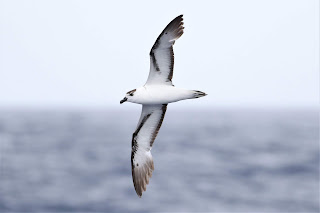 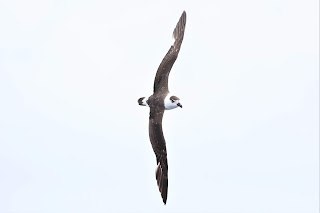 We also had some really nice passes by Cory's Shearwaters, most were the Atlantic type like this bird 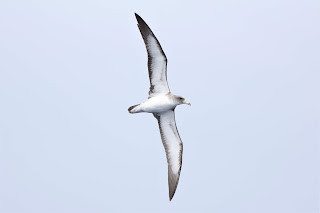 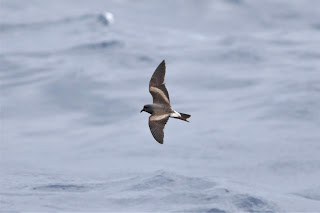 And a different angle on the young Long-tailed! 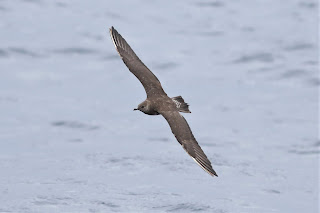