Today the weather was unsettled, and that made for some excellent birding...but wet conditions for us!  We did not see much as we headed offshore this morning, in contrast to yesterday's life inshore, but as we closed in on the shelf edge about 0740, breeze associated with some rain had the birds flying!  Especially the Audubon's Shearwaters which we saw in the highest numbers yet for this spring! (photo Peter Flood) 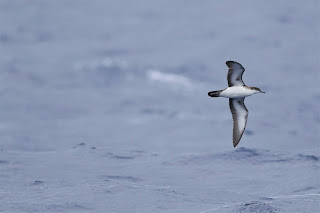 It is a bit easier to see them when they are arcing above the horizon in lines of three to five...  Plus the Black-cappeds were in their dynamic element and also came in quite well to the slick over the course of the morning!  We were in this scattered rain and its associated breezy conditions until just after noontime.  The highlight of the day was large stormies, most notably the Leach's, who were present in the highest numbers we have seen here in years! (photo Kate Sutherland) 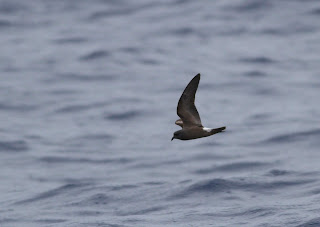 This is perhaps the peak time for Leach's to be passing offshore here and today in the rain, the winds were northwest for awhile.  This should have taken the scent of our slick offshore a bit, maybe pulling them in to it.  We had them popping up all over the place with 7 to 10 or more back behind the boat at one time for over an hour!  Incredible photo opportunities, but of course the light was a little difficult with the rain.  The Band-rumpeds did not disappoint either and we had some of the best views yet this spring of both molting and non-molting individuals! (photos by Peter Flood) 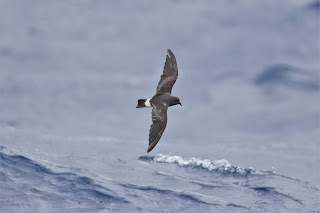 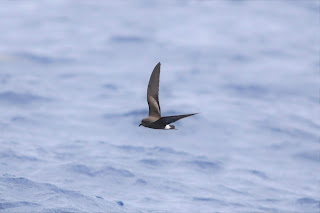 Our slick also attracted some of the first Great Shearwaters of the year and we had up to four at once behind us with some Scopoli's and Cory's Shearwaters as well, all feeding.  As the afternoon progressed, the rain passed and the seas got glassy calm - like a totally different day - and we were jumping flocks of large stormies off the water as we moved inshore on the afternoon tack.  So were these birds already there?  Or were they ones that came in to our scent and sat down on the water only to be seen by us as we headed back to the shelf edge?  Who knows?  It was an amazing display!  Just offshore of the shelf break we found a Wilson's Storm-Petrel picking around some sargassum and sitting right there were two Red-necked Phalaropes!  A bit late for them, but they were properly appreciated by everyone aboard, especially the photographers! (photo Kate Sutherland) 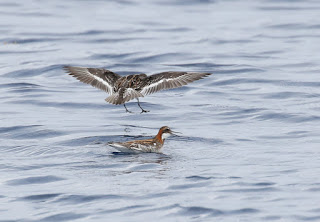 While we were checking out the phalaropes in the bow, a hammerhead shark was checking out my chum basket with fish carcasses in the stern, and flying fish were popping up all over the place.  A perfect way to end our time out there.

Thanks to everyone who headed offshore with us today and thank you to our leaders Peter Flood and Ed Corey!  Thank you also to Peter for assembling photos for today's blog post! 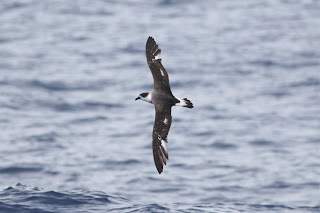 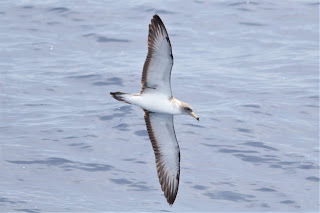 Great Shearwaters feeding in the slick made some nice passes by the stern and up the sides of the boat!  (Peter Flood - ventral / Ed Corey - dorsal) 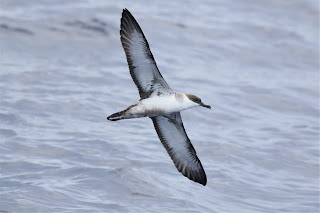 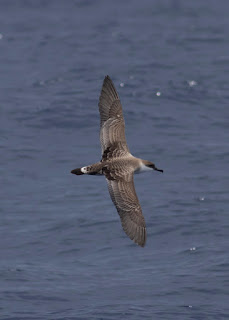 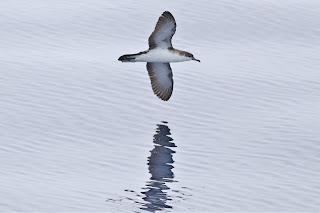 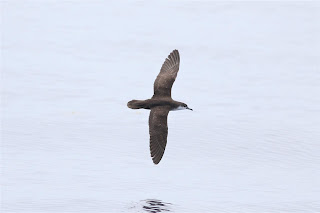 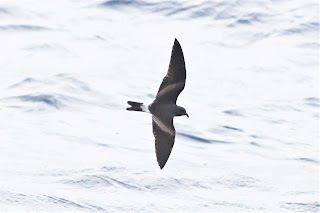 & an idea of how close the Wilson's were, in the rain...such amazing little creatures!  (Kate Sutherland) 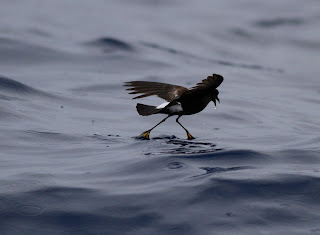