Twenty five intrepid seabirders and Captain and crew of the Stormy Petrel II steamed out of Hatteras Harbor under delightful conditions.  Exiting Hatteras Inlet we were greeted with a light breeze from the southwest, 2-3 foot seas and a gentle southeasterly swell.  Our ride out to the shelf edge was dry and comfortable with an occasional Cory's Shearwater lazily arcing across the sea surface.

Upon reaching the shelf edge we set our chum slick in motion and began to gather a few Wilson's Storm Petrels off the stern.  A Black-capped Petrel popped up now and then but seemed to keep their distance.  Around 8:20 the call went out for Tropicbird! Two Tropicbirds! A White-tailed Tropicbird and an immature Red-billed Tropicbird flew in high above the bow of the boat and passed over the Stormy Petrel II continuing on towards the west/southwest.  Curiously, we received a report later in the afternoon of two tropicbirds seen closer to shore from another vessel.  (Photos below by Chris Sloan - White-tailed top, Red-billed bottom) 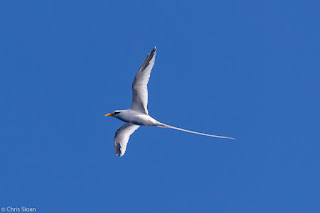 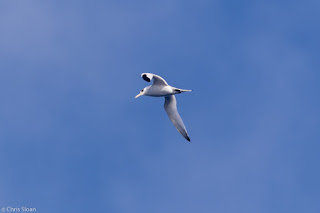 As the storm-petrel flock began to swell behind us an occasional Band-rump Storm-Petrel and Leach's Storm-Petrel weaved through the flock flying circles around the Wilson's.  We continued slowly edging our way to the east where we turned up a Bridled Tern perched on some flotsam and a few Audubon's Shearwaters in attendance around some Sargassum weed lines where they were skittering across the sea surface and one actually diving below the weed lines seeking some unsuspecting prey.  (Photos below by Peter Flood) 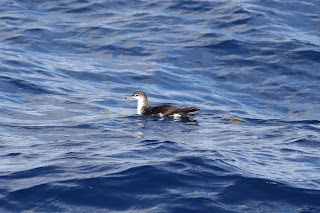 A dark Pomarine Jaeger (AKA Pterodroma repellent) joined us mid morning and hung with us for the remainder of the day.  (Photos below by Peter Flood) 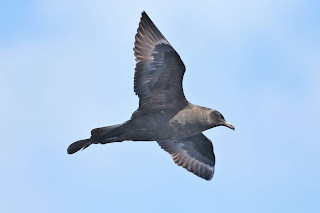 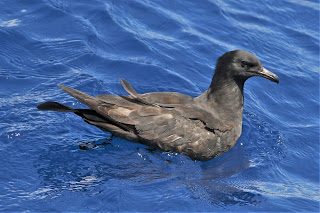 Continuing on further east we crossed a couple more weed lines and got ourselves into some rather unproductive green water well offshore.  It would be a couple of more miles before we were able to break through this water mass and get back into some warmer blue water.  While our storm-petrel flock remained with us, a few Sooty Shearwaters passed through proving nice looks and a couple spent some time in the chum slick. (Photo by Peter Flood) 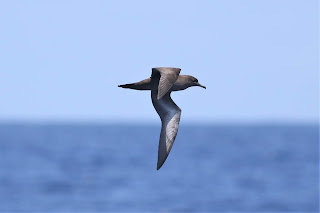 We began our westerly tack and turned up a few more seabirds as we approached the shelf edge including an immature Long-tailed Jaeger that showed quite well and briefly flirted with our Pomarine Jaeger before flying off to the northeast.

All in all a beautiful day at sea with a nice diversity of seabirds.


Thanks to our leaders and spotters today including Chris Sloan, Sea McKeon, Jeff Lemons,  and Peter Flood.  And huge thanks to Peter for writing up the blog and sharing some of his pictures.

Blue Marlin - 1 was seen out in the deep

Black-capped Petrel checking out our Pomarine Jaeger, this jaeger was with us for about four hours! 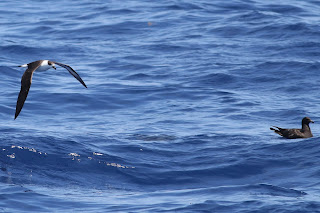 This Bridled Tern allowed everyone time to check it out before taking flight! 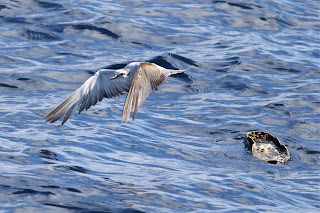 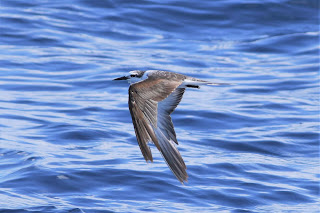 A couple images of the Long-tailed Jaeger that topped off the day for us! 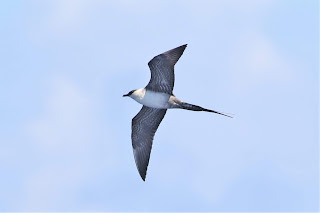 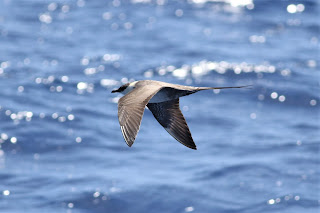