Everyday in the Gulf Stream is different, and the chop and southwest winds of yesterday had given way to relatively smooth sailing and northeasterly breezes today.  Dropping from speed near the shelf break we started to encounter Audubon’s Shearwaters transiting the area at a good clip.  These small, fast, ‘black-and-white’, shearwaters were a challenge for some birders aboard to get on and would remain enigmatic for much of the day.  Our attention was diverted by the rapid appearance of several Black-capped Petrels, the Gulf Stream signature species, which wheeled and dove as if on an impossibly smooth and graceful rollercoaster. These birds, most in varying degrees of wing molt, made progressively closer passes to the stern of the Stormy Petrel II until all aboard were comfortable with the striking appearance of this threatened species (photo by Kate Sutherland). 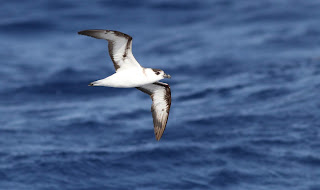 As we were making friends with the Black-capped Petrels, a small squadron of Wilson’s Storm Petrels gathered to feed on oil and chum at the back of the boat.  They too worked in closer and closer (photo by Peter Flood). 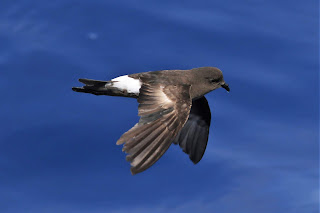 Just as several Cory’s shearwaters were making their own close passes, mayhem broke loose as the first large storm petrels appeared in the mix at the same time a pod of Bottle-nosed Dolphins arrived to play at the bow.  Birds would be abundant for some time with trip participants racing to find their next target species.  Most of the larger storm petrels turned out to be Leach’s Storm Petrels, with a few individuals making close passes and providing “crippling” looks, to quote one of the trip participants (photo by Andrew Dreelin). 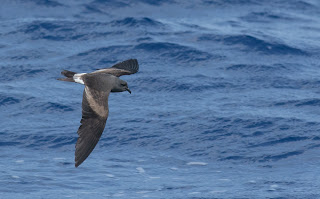 As the day wore into a golden afternoon, the change in light provided photographers onboard with brilliant opportunities to study an obliging Pomarine Jaeger, and an individual Arctic tern that appeared to investigate a kite flown just above the boat.  The same angles of light provided the best looks at Audubon’s shearwaters we would have for the day, and allowed us to see a single, late, Red-Necked Phalarope that came into the slick (photo by Andrew Dreelin). 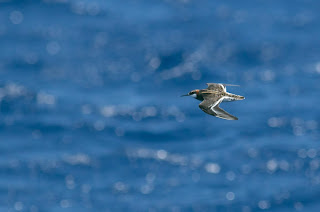 Several onboard were eager to inspect the sargassum we had been seeing all day, so Kate dipped some with a long-handled net.  Sargassum Swimming Crabs, two types of shrimp, and a diversity of other invertebrates inhabited a clump that contained not only the two species of pelagic sargassum, but also rhizomes of two seagrass species normally found much farther to the south.  As we increased speed to head home, a dark jaeger could be seen in the distance menacing a flock of mixed Arctic and Common terns.  The jaeger slowly pushed all of the terns up into the sky, and we left another successful day in the Gulf Stream.

Thank you to everyone who joined us offshore today and thank you to our leaders: Sea McKeon, Peter Flood, and Andrew Dreelin!  Thanks also to Sea for the post and to Peter and Andrew for contributing photos for the post!  -Kate

The Black-capped Petrels were very active today and many passed close by the boat, like this dark faced individual (Andrew Dreelin) 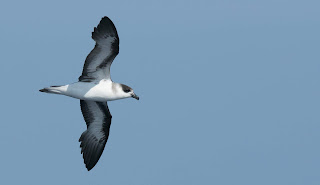 Audubon's Shearwaters can be tough to spot when they are flying by if they do not turn to flash their white underparts!  Their dark backs blend in with the sea, today many were flying high enough to pick them up as they arced - this one fed in the slick for a bit! (Kate Sutherland) 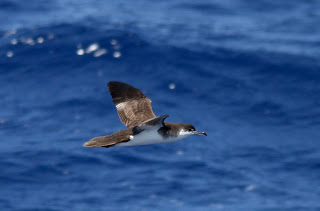 One of the Band-rumped Storm-Petrels we saw today was not molting (pictured below), while the others were more typical showing molt in the primaries.  (Peter Flood) 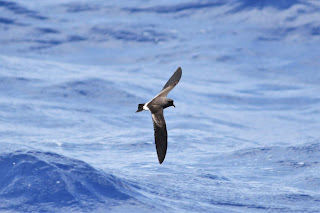 This curious Arctic Tern came in behind the boat just after Sea had been flying a kite!  It stayed with us and fed on the chum for a bit, giving everyone ample time to observe it!  (Andrew Dreelin) 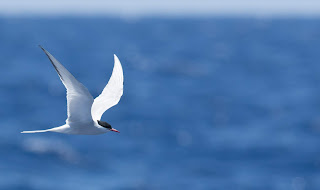 A nice shot of the Pomarine Jaeger that fed behind the boat for awhile!  (Peter Flood) 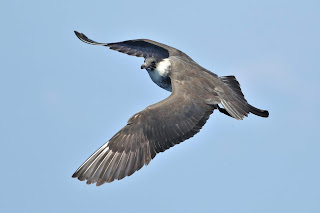 And a couple shots of the Bottlenose Dolphins that came in to the boat this afternoon!  (Peter Flood) 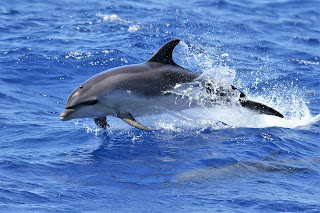 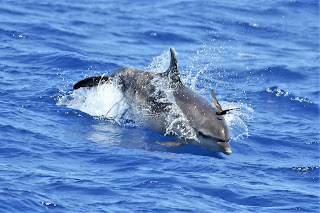