A partly cloudy, moonlit sky greeted the crew and twelve passengers of the Stormy Petrel II this morning, in stark contrast to the gray cloudbanks and impending rainfall of the previous two days.  The storm system had moved on, and we weren’t sure what to expect out in the deeper waters off of Hatteras.  The ride out to the Gulf Stream was relatively uneventful, though it was good to see an adult Black Tern not too far from the inlet.

Once off of the Continental Shelf, we noticed that the seas were much quieter, with little wind to get the birds moving.  Flat seas can be good for cetaceans and spotting birds on the water.  Early on, we found a cooperative pod of pilot whales (likely Short-finned) logging lazily at the surface. (photo Peter Flood) 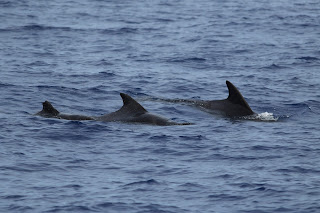 We were also able to find a handful of Black-capped Petrels sitting with a single Great Shearwater, and several Wilson’s Storm-Petrels.  Black-cappeds are quite wary on the water, and didn’t allow us to get too close, but all aboard were able to see these “flying field marks” as they took off.  (photo by Peter Flood) 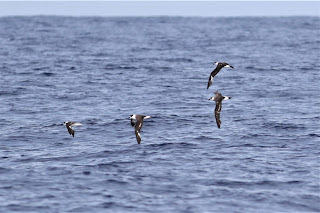 Birds visited our chum slick off and on all day, with decent diversity.  A lone Leach’s Storm-Petrel visited us around 0900, and Band-rumped Storm-Petrels popped in sporadically throughout the day.  We had visits from the different morphs of Black-capped Petrels (dark-faced, intermediate, and white-faced), Great Shearwaters, as well as both Atlantic and Mediterranean-breeding Cory’s Shearwaters (the latter often referred to as Scopoli’s, or the nominate Cory’s).  (photo by Steve NG Howell) 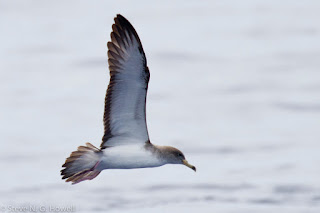 After a lull in activity, we began to notice some fish breaking the surface.  Skipjack Tuna were chasing baitfish, leaping clear of the water as they went.  One piece of flotsam along our trajectory held Tripletail, clinging tightly to the only structure they could find in the big blue desert.  A marlin surfaced briefly, providing a few people a quick glimpse of its distinctive dorsal fin.

Around 1300, the slick picked up a bit more excitement, as a lone Sooty Shearwater joined us for a couple of passes.  Then, a 2nd-summer Long-tailed Jaeger came steaming towards the flock of storm-petrels behind the boat.  After harassing several Wilson’s in the slick, it took aim on an adult Laughing Gull that had found us a few miles before.  Everyone enjoyed seeing this aerial master as it “dogged” the gull, finally persuading it to drop some morsels of food. (photos by Peter Flood) 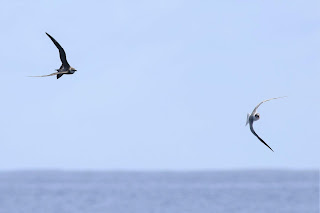 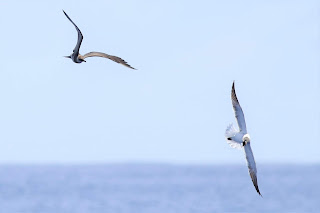 Many of our trip participants were new faces, and we were glad to show them what the Gulf Stream has to offer!  Thanks to Steve NG Howell, Peter Flood, and Ed Corey for helping us to lead the trip today!

We had a few dark faced Black-capped Petrels today, like the individual pictured below (Kate Sutherland) 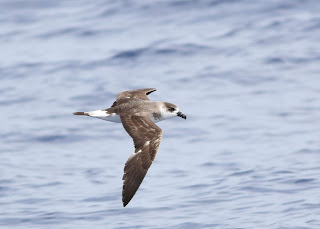 Here is a nice dorsal shot of a Scopoli's 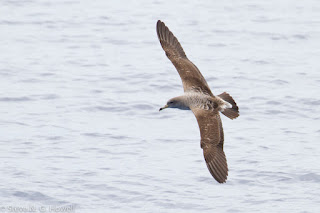 Here are two shots, Atlantic Cory's on top and Scopoli's on the bottom (photo by Peter Flood) 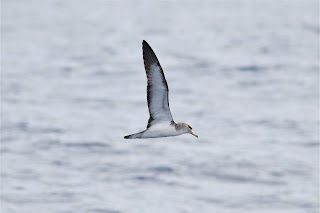 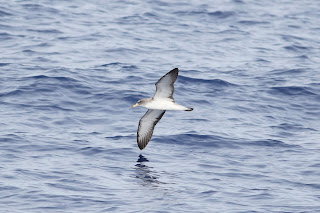 We just had one Sooty Shearwater today (photo by Ed Corey) 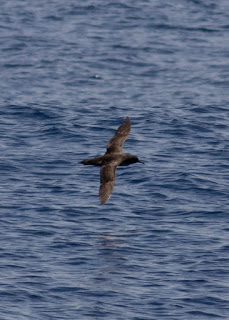 But the Audubon's were around!  Not quite like yesterday, but they were flying!  (photo by Ed Corey) 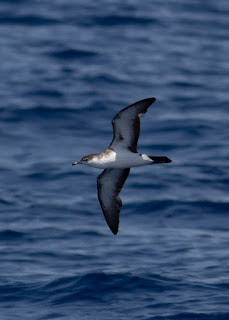 Band-rumped Storm-Petrels showed well over the course of the day and we saw both molting (top - Steve NG Howell) and non-molitng birds (Peter Flood). 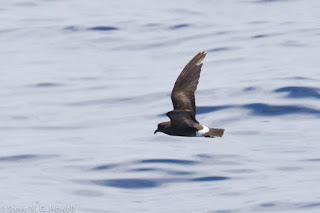 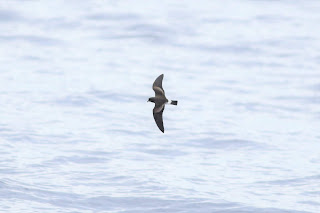