A wind direction switch again, this time to light southeasterly, as we left the dock under mostly cloudy skies with a red sun rising over Hatteras Village. A Black Tern and a few shearwaters punctuated today’s commute out to the Gulf Stream where we spent the day cruising slowly along in search of oceanic desert birds. The chum slick slowly started to pull in Wilson’s Storm-Petrels but it took a while before the first Black-capped Petrel appeared, and even longer for the first Band-rumped Storm-Petrel. But then Band-rumps started to show well and we slowed to drift, with good light plus current and wind directions conspiring to make a slick to remember. Over the course of 30 minutes we were treated to an absolutely amazing show of point-blank Black-capped Petrels, shearwaters, and storm-petrels all around the boat in dazzling light. Particularly nice was a recently fledged juvenile white-faced Black-capped Petrel that fed on chum next to the boat. 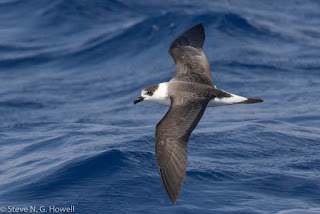 As has happened in recent days, the “Cory’s Shearwaters” that came close and into the slick were again of the Mediterranean-breeding population known as Scopoli’s Shearwater (split in the rest of the world but not [yet] by North American authorities). Most of the Band-rumps were molting birds from the winter-breeding population known as Grant’s Storm-Petrel (don’t even think about asking if that’s been split yet in North America...). 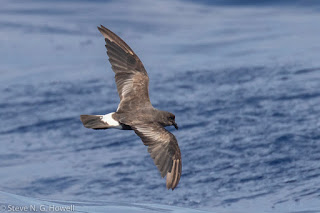 We also saw a few Leach’s Storm-Petrels, which were “just” Leach’s given that we were in the Atlantic, far from the two recently split populations of Leach’s from Mexico. As in all birding, location is a huge clue when looking at seabirds. Shortly before lunch, John Fitzpatrick with the Cornell Lab contingent spotted a distant gadfly that proved to be a (presumed) Fea’s Petrel, but it stayed far away and, although highly unlikely, it could have been a Zino’s Petrel given the views (moreover, Fea’s is split into two species by many authorities, adding to the challenges of pelagic birding!). As well as birds and flyingfish we saw some nice mammals, starting with bow-riding Bottlenose Dolphins in the morning, and then a dispersed group of logging Pilot Whales that seemed curious around the boat and gave amazing views, even spy-hopping like this animal. 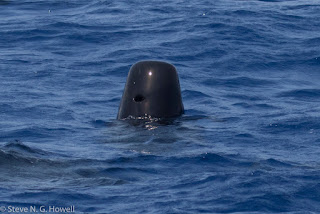 As we headed on slowly back towards the alternate reality of mainland life we came upon a spectacular current break between the blue offshore and green inshore waters, after which birds dropped off noticeably and it was time to pick up speed and head back to port, slowing to see a couple of distant jaegers that kept heading north and avoided positive identification. All in all, another amazing day offshore.

*Thank you to everyone who joined us out there today!  A big thanks to Brian Sullivan for organizing a group from the Cornell Lab of Ornithology and for taking care of the eBird lists for yesterday and today.  Thank you also to our leaders: Steve NG Howell, Nate Dias, and Liam Waters, they all did a great job getting everyone on the birds!  Thanks to Steve for all of his hard work on the blog and photos for me as we approach Day 18... -Kate

Another image of the young Black-capped Petrel that put on such a nice show by Brian Sullivan. 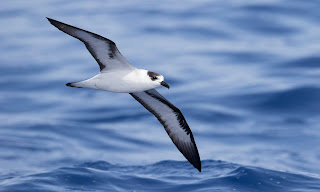 And one more by Nate Dias - this bird was very curious about the boat and also came in to feed on the chum. 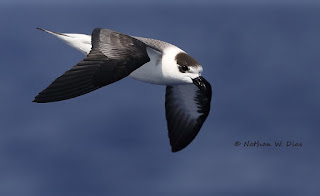 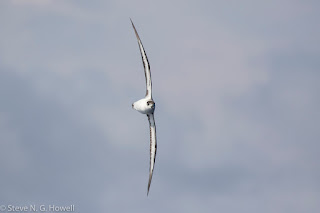 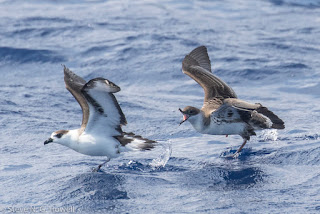 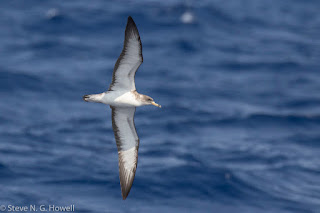 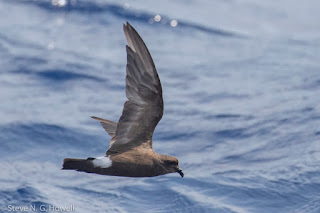 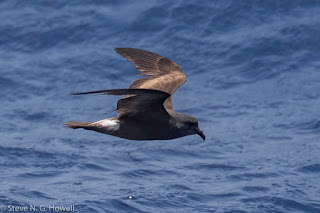 The Band-rumped Stormies were super excited about the chum today!  Photos by Nate Dias 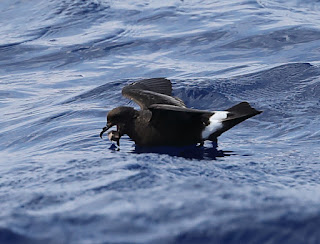 An Oddspot Midget from the morning commute offshore. 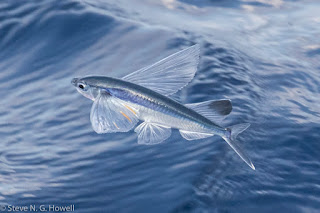 Posted by Kate Sutherland at 8:15 PM