Spring 2018 Wrap Up by Brian Patteson

This was our 12th Spring Blitz aboard the Stormy Petrel II and for the first time in many years we did not miss any trips because of weather!  We ran a kick-off trip on May 19 and then began daily trips on May 23, ending on June 9!  This run of 18 consecutive day trips was second only to the 19 straight days we ran in 2009!  Going every day gives one a good perspective on how the ocean is constantly changing.  Subtle differences in local wind direction and current flow from one day to the next have a bearing on what we find.  It's also complicated by other factors well to the south and east of Hatteras.  Prior to the "Blitz" we had an extended period of southerly winds with fewer shifts to the north than we get during this period some years.  Although we did not get the strong westerly flow that prevailed last spring, we didn't get much easterly flow either, so overall the weather had a negative impact on diversity.  Easterly flow is key for seeing lots of South Polar Skuas and all three jaegers.  It is also good for Trindade Petrels and Arctic Terns.  We had a few of the latter early on, but I think most of that flight was out around Bermuda this spring.

The conditions did not seem to affect the more expected species as much, however.  We had a good showing of Black-capped Petrels, and our lowest counts of 11 and 22 were a far cry from the single digit counts we've had a few times when the Gulf Stream took a queer turn.  The Gulf Stream has done just that a few times this winter and spring, and on some days the water out in the deep was greener than usual.  The Leach's Storm-Petrels didn't seem to mind this green water, however, and we saw a total of 142 on ten trips in May with a hight count of 55 on May 30.  We also had some rainy weather in late May and that did not deter the Leach's Storm-Petrels either.  Band-rumped Storm-Petrels were found in modest numbers, and the majority that we saw were molting winter breeders.  We also saw some sharp looking Band-rumps that we surmised were summer breeders.  As far as the AOU or ABA checklist is concerned these are all the same, but more likely these are cryptic species that will remain a challenge to identify at sea.  Scopoli's Shearwater seems to be a more likely split here in the near future and we spent quite a bit of time looking closely at the Cory's type shearwaters feeding in our chum slicks.  From late May onward, a steady procession of Great Shearwaters were nice to have around for sorting out the Cory's.  Cory's Shearwaters (the Atlantic breeders) are larger (but not heavier) than Great Shearwaters, while Scopoli's Shearwaters, which nest in the Mediterranean, are smaller than Great Shearwaters.  Sexual size variation complicates the Cory's/Scopoli's ID a bit though and the parameters for ID by plumage are still being worked out.  One thing we've noticed though is that Scopoli's are pretty consistent boat followers when we are chumming.  They also seem to predominate in the deeper waters.  Audubon's Shearwaters made a better than usual showing this year and I think this is because we had so many days with southerly winds and also because Sargassum - their main foraging habitat - was abundant most days.  Wilson's Storm-Petrels, on the other hand were in lower than usual numbers.  This was about the 3rd year in a row with only about 100 or so Wilson's per trip average.  Last year, I figured numbers were off because of westerlies.  This year, and perhaps also in 2016, it was because of southerly flow.  We tend to see more Wilson's Storm-Petrels when the wind is against the current and both southerly and westerly wind is with the current.  Nevertheless, Wilson's Storm-Petrel was the most numerous species on all but two trips, which were days with good counts of Audubon's Shearwaters.

Rare tubenoses in spring 2018 were just that - rare.  We had Trindade Petrels on just a couple of trips, both in May.  We did not see a "Fea's" Petrel until June and we only had a couple that showed well close to the boat.  The bird we saw on June 2 was a small one and we wonder if perhaps it was of Cape Verde origin.  The bill looked too thick at the tip for Zino's, but too fine for perhaps even a female Desertas Petrel.  Tracking data suggests Cape Verde Petrels don't come here that much, but researchers have only followed adult birds.  Desertas Petrel and Cape Verde Petrel are another pair the AOU and ABA has yet to deal with.  Some authorities have split them as cryptic species.

Tropicbirds are not cryptic but we did a double take when two tropicbirds appeared overhead during the morning of May 26.  Our first impression was there was a big one and a small one and sure enough we had a short-tailed immature Red-billed Tropicbird and a long-tailed White-tailed Tropicbird appear at the same time.  This is only the second time we have seen this in 25 years of spring trips here!  Red-billed is usually the spring tropicbird, but this year we also found a White-tailed Tropicbird on May 19 - very early for this species!

I was hoping daily coverage in early June might net us another Swinhoe's Storm-Petrel but it was not to be.  Of four that we have seen off Hatteras, three have been found in the first ten days of June.  We did get a European Storm-Petrel on June 1.  European Storm-Petrel is looking like another future split.  Formerly know as British Storm-Petrel, it was renamed because of the population that breeds in the Mediterranean.  Now it looks as though they are distinct.  Presumably the birds we are seeing once or twice most years are the more wide ranging British Storm-Petrel.  We did not see a Bermuda Petrel this spring, but we did luck out with another rare petrel.

On May 29, we had just gotten out of some heavy rain and were in the process of attracting birds to a new slick when Peter Flood spotted a different looking petrel he initially called in as a light Trindade Petrel.  He soon recognized it as something different, but it took a few minutes to figure it out as the bird left the slick about as quickly as it had come in.  Conventional logic had us thinking Atlantic Petrel, which would have been a first for the western North Atlantic and way out of range.  But the straight wings and size and shape of the bill made us realize we had seen a TAHITI PETREL, which was even less expected here.  As far as we know Tahiti Petrel had not yet been recorded in the Atlantic Ocean, and it was definitely not on our radar.  None of our crew had seen one before but the big bill and overall structure was familiar to us from books, and we got some good photos of our bird.  In size it was similar to a nearby Black-capped Petrel so that eliminates the even more remote possibility of the smaller, but similar Beck's Petrel.  Beck's is about the size of a Fea's Petrel and very rare, until recently presumed extinct.  Tahiti Petrel is a common species that ranges as close as Panama.  Interestingly we saw the Tahiti Petrel not long after a tropical cyclone had left the Gulf of Mexico.  We've seen some great vagrants over the years but I think the Tahiti Petrel is the least expected of them all and, as such, our biggest MEGA to date.  I think it's also our 20th species of tubenose for the boat!  That's 20 species by AOU/ABA taxonomy, so it doesn't include Scopoli's Shearwater!

We did not find as many marine mammals this spring as some years but we did see Bottlenose Dolphins out in the deep on several trips and there were good numbers of Pilot Whales in early June.  A pod of Cuvier's Beaked Whales popped up beside the boat on May 19, but in contrast to most years, we never found any Gervais' Beaked Whales this spring.  Other charismatic megafauna included Loggerhead and Leatherback Turtles, Blue Marlin, and a couple of leaping devil rays.  We rummaged through the Sargassum on several trips and looked at what Audubon's Shearwaters and other seabirds feed on there.

As usual we had a good crew aboard and would like to thank everyone who made it possible to carry out this epic run of trips.  Our spotters / leaders this spring included: Steve NG Howell, Nate Dias, Chris Sloan, Seabird McKeon, Jeff Lemons, Peter Flood, Ed Corey, Sage Church, Andrew Dreelin, and Liam Waters.
-Brian Patteson

Our spring trip lists are compiled here, and I have put together some additional photos from the spring below!  Thank you to everyone who worked hard and contributed photos for the blog over the eighteen days stretch - it was much appreciated so that I could get everything posted each evening in a timely fashion and still get a little sleep!  Thank you also to our Spring Gallery contributors...there may be more if I receive some additional images!  -Kate Sutherland

First of all, here is another photo of the Tahiti Petrel by Peter Flood followed by a couple of photos taken as Brian was examining images on the backs of cameras and discussing the size of the bill (by Kate Sutherland) 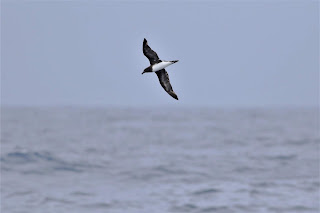 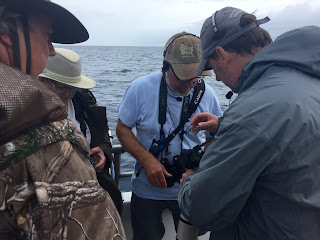 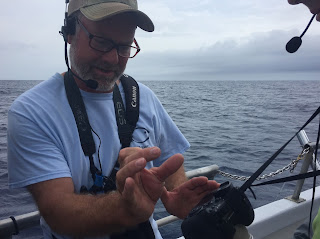 Maili Waters (MA) was one of our participants for three trips near the end of the Blitz and she captured some nice images of the Stormy Petrel II and her seabirders!  I love these!  And an image of one new species for me, the Devil Rays that came right in under the pulpit! 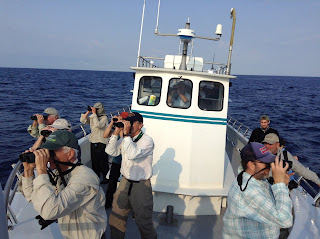 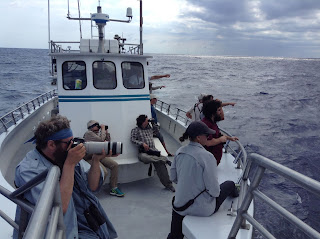 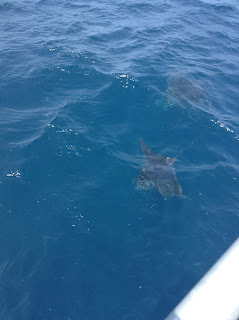 Nate Dias (SC) was back helping us as a leader after a few years hiatus and he captured these images over the five trips he was on this spring!

The young Black-capped Petrel from June 8: 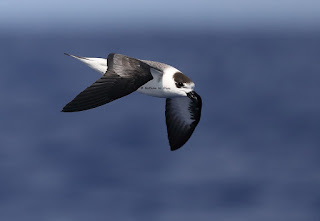 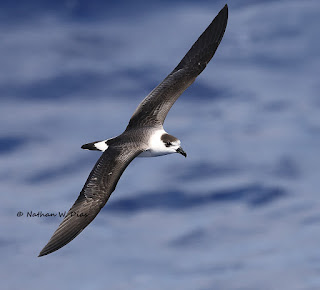 Great Shearwater with what looked to be some food in its mouth! 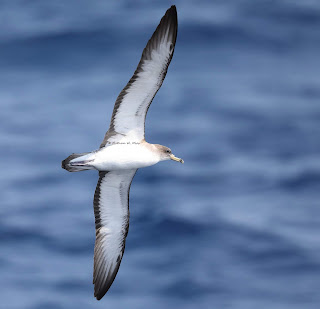 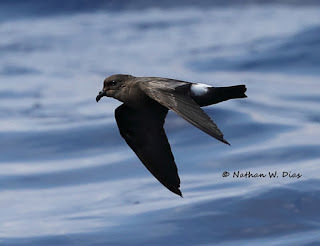 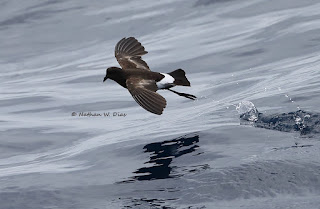 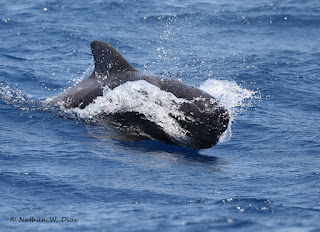 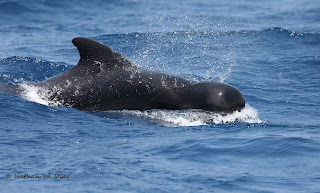 & a nice shot of one of the many Sargassum Midgets we saw this spring! 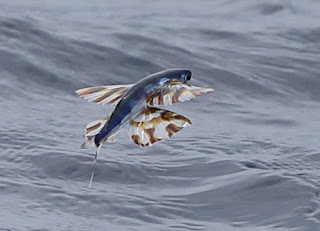 Peter Flood (MA) sent me a few more images for the gallery!  He and Steve Howell contributed most of the photos this spring... 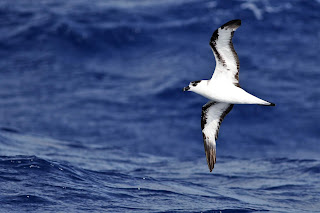 We had some incredibly close passes this spring by Leach's Storm-Petrels!  Their bill is much larger than a Band-rumped Storm-Petrel and they have a much grayer head, as you can see here. 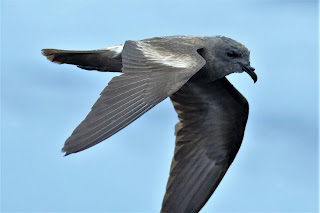 South Polar Skua from early in the Blitz 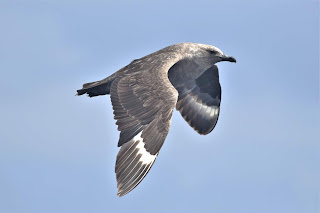 I also captured a few images...well a lot actually!  But here are a few more for the gallery from me, Kate Sutherland.
A few Black-cappeds 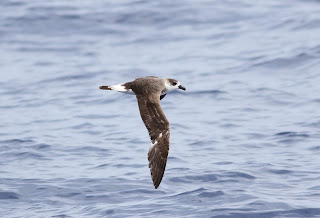 The juvie Black-capped with a Great Shearwater 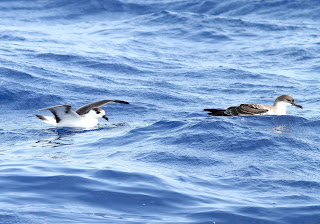 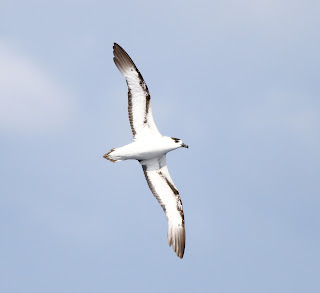 Audubon's were around in good numbers this spring and we had some nice photo ops! 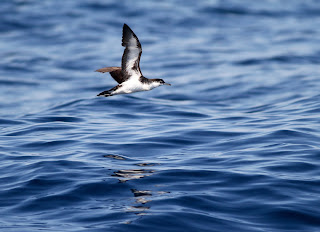 Great Shearwater tossing back a piece of chum 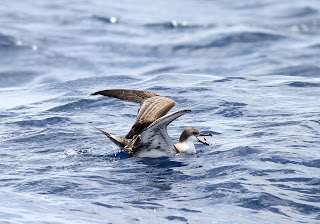 Scopoli's and Great Shearwaters behind the boat 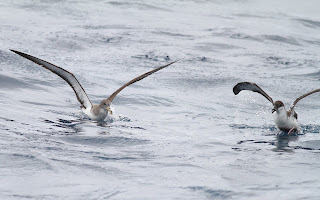 Our "smudgy-rumped" Leach's from May 28 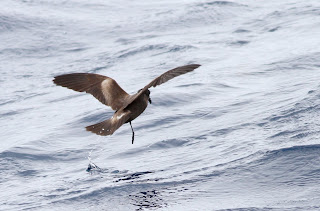 A Band-rumped posture we don't always get to see! (Grant's type) 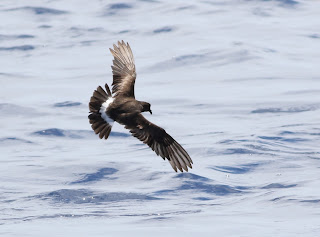 A couple images of one of the Arctic Terns we saw this spring...in the rain! 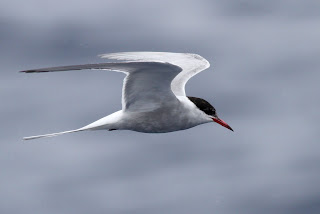 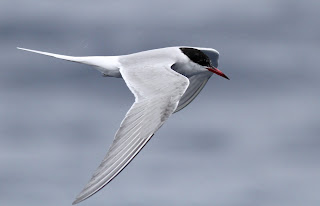 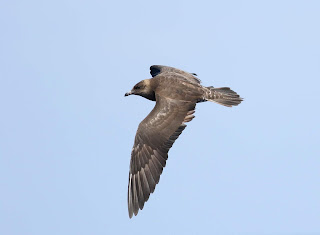 & we did have at least one Portuguese Man-of-War this spring! 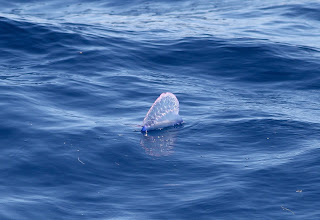 I have so many more...but will leave it at that for this year!  If I get my Flickr album together soon I will put a link here!  Thanks again everyone for coming offshore with us!  -Kate
Posted by Kate Sutherland at 10:31 PM