Our final day of the Spring Blitz brought some lighter winds from the south and our commute offshore to the deeper waters beyond the shelf break was quite nice with a few shearwaters along the way.  There was some rain where we slowed down and began chumming and while uncomfortable for humans, and frustrating for keeping optics dry, it was perfectly suitable for seabirds!  As we stopped on our first drift just after 8:00, we added all of the birds we typically see in the Gulf Stream to our list - and with nice views too!  There were at least five Black-capped Petrels that came right in to the chum plus Scopoli's (the Mediterranean breeding Cory's type), Great, and Audubon's Shearwaters. (photo of a Great Shearwater by Nate Dias) 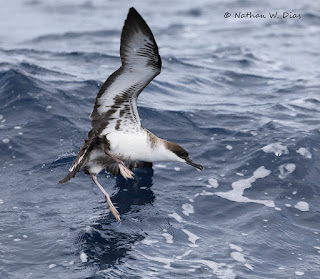 Wilson's Storm-Petrels began feeding on our chum and a few Leach's Storm-Petrels joined making some nice passes in the rain.  Band-rumped Storm-Petrels were around as well, but were not quite as cooperative as yesterday - yet!  As we tacked offshore, then back inshore later in the morning and into the afternoon we pulled a very nice feeding group with us.  The shearwaters were feeding behind us giving some incredible views of the large, brute-like Atlantic Cory's with the more diminutive Scopoli's together - a nice study!  Plus the Great Shearwaters were vocalizing as they fought over bits of fish;  Audubon's zipping in and out of the slick (photo by Nate Dias), 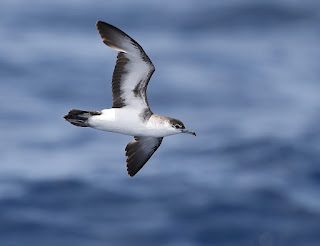 occasionally coming right up to the back of the boat before flying off to settle back in the sargassum, the floating brown algae of the Gulf Stream, that is their preferred habitat.  The finale was a good one with our flock back inshore nearing the shelf break, we had both Leach's Storm-Petrel and a summer breeding Band-rumped Storm-Petrel (presumed Madeiran type) in the slick at the same time! (Band-rumped photo by Kate Sutherland) 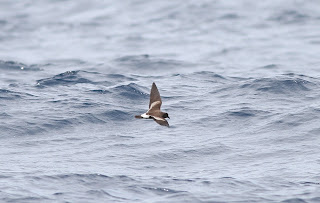 As everyone was having their best looks of the day at Band-rumpeds, a Manx Shearwater flew by and landed ahead with some Great Shearwaters!  We were able to approach and have some excellent views of this bird flying into our slick, and sitting on the water - once seen, it was obvious how different they are from Audubon's - yet this is the species most easily confused with them.  As we watched the Manx with both Great and Audubon's Shearwaters, the non-molting Band-rumped made some nice passes again as well!  What a way to end the Blitz!

Thank you to everyone who joined us out there today - and thanks to Eagle Eye Tours for organizing a group that was with us for the last two days of the Blitz.  Thanks to Steve Howell and Nate Dias for helping us on this last day, and thanks to them also for contributing photos for the post!  Next trips - July!  Check our website for the schedule... 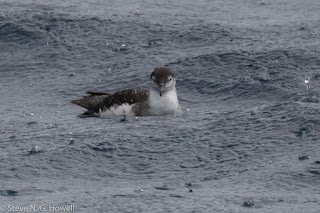 Black-capped Petrels showed as soon as we put out some chum, here a black-faced type 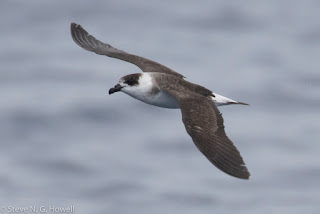 And here a white-faced Black-capped Petrel 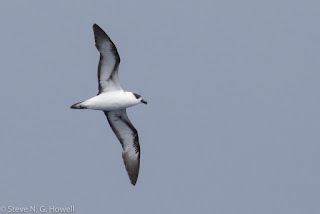 Most Band-rumped Storm-Petrels were winter-breeding Grant’s types, like this individual in wing molt… 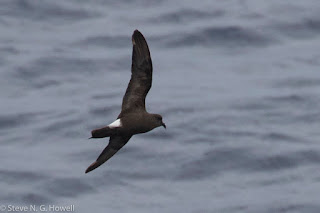 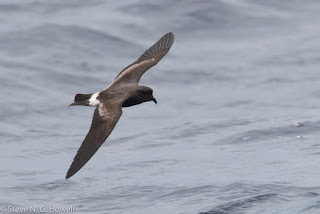 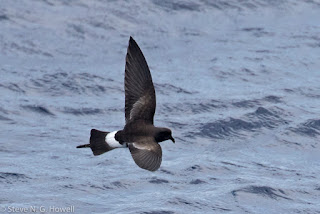 But most were molting adults 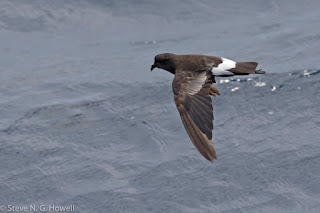 The Leach’s Storm-Petrels were abraded first-summer and, like this bird, presumed second-summer individuals 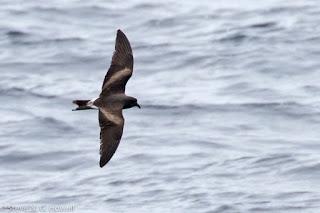 While underwing pattern is often cited as a feature for Scopoli’s Shearwater, but lighter structure and slender bill is often easier to see… 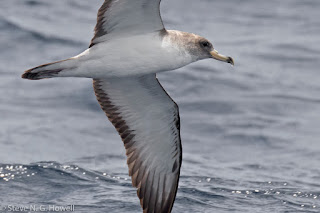 As compared to this “huge-billed” Cory’s 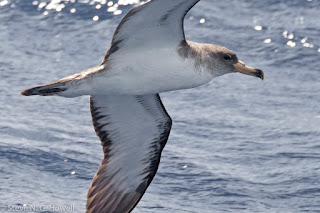 Audubon’s Shearwaters showed well, which helped in the afternoon… 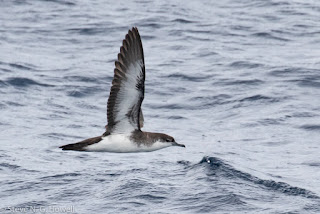 When this heavy-bodied Manx Shearwater appeared. 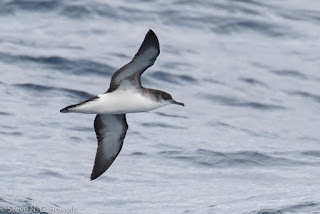 Posted by Kate Sutherland at 9:24 AM