Following a couple of days when large shearwaters were scarce we made up for it today in spades and then some, plus a few rare birds thrown into the mix, and a change in weather.

The fresh breeze had shifted overnight to northwest, making for a comfortable commute out to the Gulf Stream, albeit under mostly overcast skies. The day’s first rare bird was a nighthawk not far offshore, seen too briefly for species to be established. Once out in the blue water we slowed down and started to pick up a few birds, but not till the windier areas and choppier water did things really pick up, with storm-petrels, shearwaters, and Black-capped Petrels coming into the chum slick. It was a bit rough, but our slow steady heading made things as good as they could be, and Black-capped Petrels showed well and steadily all morning. Fred was noticeably absent (see yesterday’s blog post), but we saw our first fresh juvenile of the season, a white-faced type (= cryptic species). 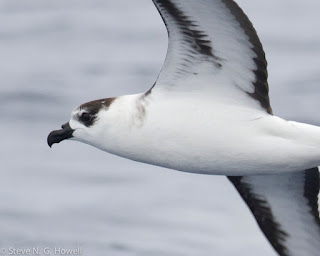 Audubon’s Shearwaters were down in numbers, or perhaps just harder to spot in the bigger swells, and among the Wilson’s Storm-Petrels we found a few Band-rumped Storm-Petrels (both molting and fresh individuals) and later in the day at least one Leach’s Storm-Petrel, seen by all (here with a Great Shearwater). 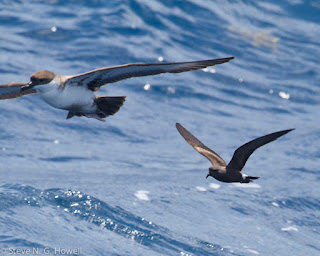 The highlights were still to come: as the morning went on, Great Shearwaters started to visit the chum, along with some Cory’s and Scopoli’s Shearwaters, and numbers built to 20 or so birds wheeling and milling and feeding amid the waves and the scads of storm-petrels. Even Captain Brian came outside to enjoy the show and snap a few images, which tells you how good it was. Indeed, the opportunity to study all three species feeding and flying together over a couple of hours at point-blank range was a rare treat. OK, so the North American authorities don’t (yet) treat Scopoli’s as a full species, but the rest of the world does and, as Allan R. Phillips once said, the birds decide the reproductive isolation, not the people. A dark first-summer Long-tailed Jaeger joined the action for a while, giving great views and heralding the appearance of the sun.

While we were absorbed in the wheeling and bickering shearwater spectacle the next rare bird flew by—a Royal Tern, common onshore perhaps, but rare far offshore. And then a gull appeared—which almost always means a Laughing Gull out here, but not this time. It took a minute or so to get some clear views, but the bird proved to be a second-summer Lesser Black-backed Gull! Expected here in winter (inshore at least), but the first found offshore on our spring trips, thus making it as “common” in spring offshore from Hatteras as Tahiti Petrel. Remember, everything is rare somewhere and at some time! 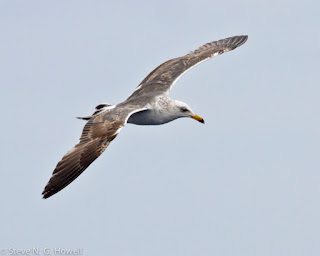 Around midday the clouds cleared off and things became sunny, which was appreciated after a decidedly cool morning. It was a change to see people seeking the sun instead of hiding in the shade for the past few days! And as we headed back inshore the wind dropped out and the seas flattened to make for a very pleasant end to a really great day. Flyingfish included some Necromancers and the first Rosy-veined Clearwings of the season, along with the more usual suspects.

(Thank you to our participants for joining us today, and thank you to Steve for the photos and blog!  Brian Patteson also contributed a few photos today as well!) 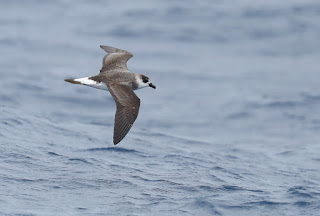 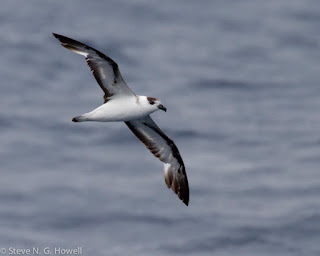 One of 3-4 Scopoli’s [Cory’s] Shearwaters behind the boat for hours (Brian Patteson). 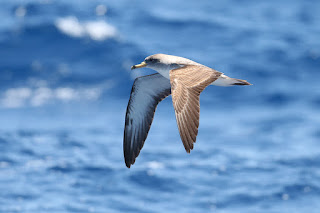 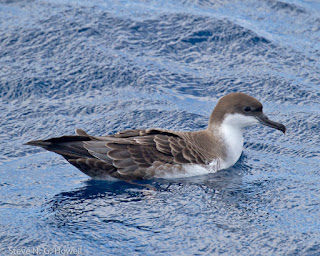 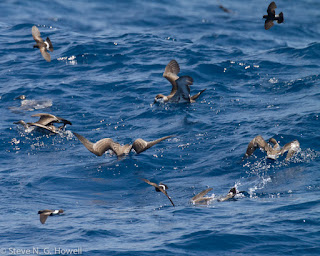 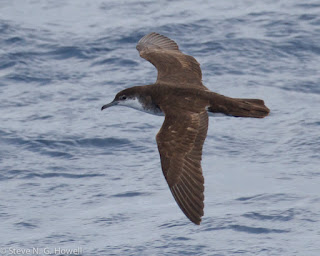 A molting Band-rumped Storm-Petrel (“Grant’s Storm-Petrel”); the appearance of a tail fork varies greatly with angle of view. 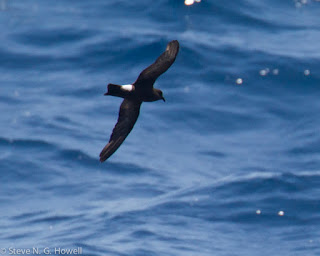 An unusual trio – Black-capped Petrel, Great Shearwater, and Lesser Black-backed Gull - quite possibly the only photograph of these species together! 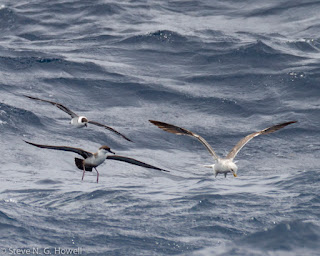 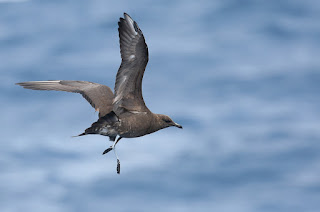 Steve captured this nice image of Brian out of his habitat today!  It was chilly and the birds were amazing...we had a few drifts that made for some nice photography. 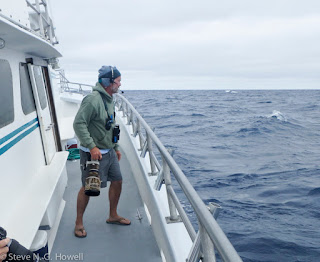