Overnight the wind switched to northeast, and a mostly cloudy sky with spitting rain greeted today’s crew and passengers of the Stormy Petrel 2 at the dock. The wind freshened through the day and the white-capped seas were very different from the calm of yesterday—as were the birds. A small flock of migrating Short-billed Dowitchers flew over on our commute offshore, and a group of Bottlenose Dolphins came to check us out as we started to slow down for birding. 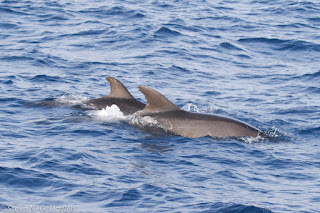 Then the birds started, slowly at first but steady throughout the day. Black-capped Petrels sailed well in the wind, and we enjoyed good views of both black-faced and white-faced types, likely cryptic species. 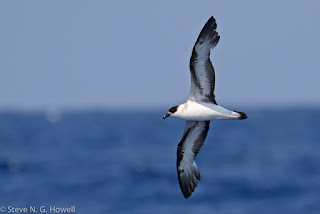 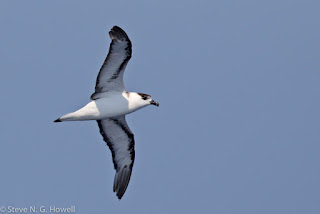 As in recent days, Audubon’s Shearwaters were fairly numerous in the golden Sargassum weedlines, while the north wind proved good for bringing the large shearwaters into the chum—by early afternoon we had a swirling mass of Great, Cory’s, and Scopoli’s Shearwaters (see blog post from 3 days ago) behind the boat, offering excellent comparative views and photo ops. Shortly after noon a distant waterspout appeared, but the stormy clouds dispersed by early morning to leave cloudless skies. 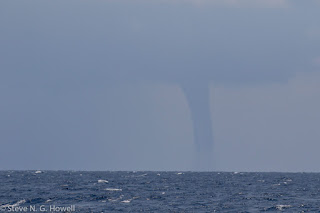 Perhaps the most striking difference from yesterday was the near constant presence of Band-rumped Storm-Petrels among the Wilson’s Storm-Petrels in our slick, with up to 7 Band-rumps behind the boat at times, both molting and fresh-plumaged individuals—versus none at all yesterday! A couple of Leach’s Storm-Petrels also showed well, and a Bridled Tern (surprisingly scarce this spring, so far) made a pass by the boat in early afternoon, adding to the avian variety. Shortly before heading back for shore a group of Pilot Whales charged around exuberantly in the white-capped waves, and the return commute was highlighted by superb views of a couple of Devil Rays (like small Manta Rays), swimming right under the bow! All in all, another great day at sea.

(Thank you to everyone who joined us today and thank you to our leaders: Steve NG Howell, Nate Dias, and Liam Waters.  Brian Sullivan, who organized a group to join us today, kept the eBird list for this trip - a huge thank you to him for that task!  It was an amazing day out there!) 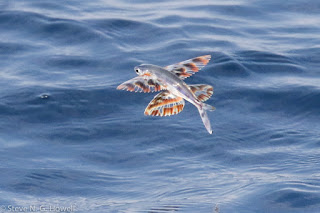 Molting Band-rumped Storm-Petrel, and for comparison... 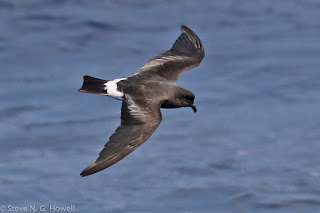 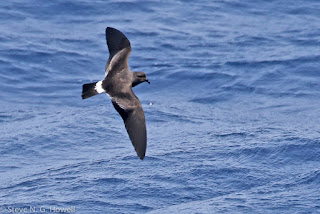 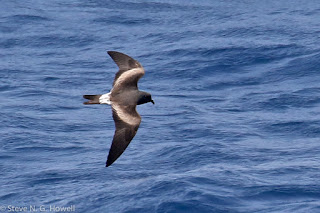 One of the numerous Audubon’s Shearwaters 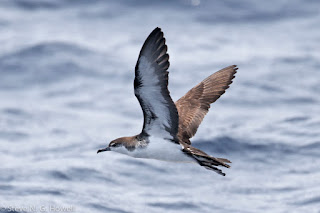 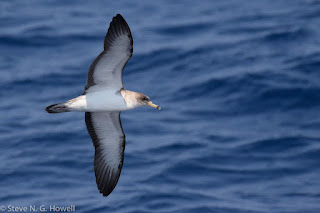 Compared to Scopoli’s Shearwater with poorly marked white on underwing, but a slender bill 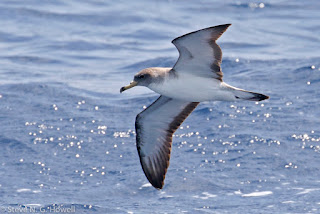 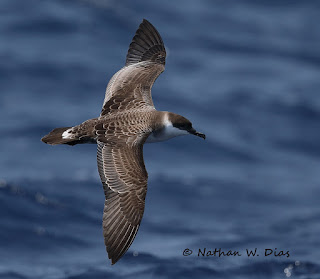 One of the Pilot Whales in charging mode. 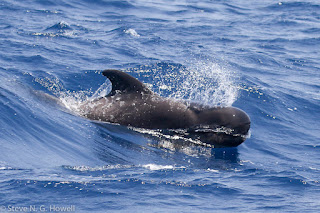