Today we headed more to the south, into the waves, anticipating the current we had yesterday and giving ourselves space to more a bit move to the north.  We didn't find much on our way to the shelf break but did find a nice color change with a temperature break just inshore of there.  Not much life on this break compared to yesterday, but we were able to get some nice views of Audubon's Shearwaters!  While we didn't have many Wilson's Storm-Petrels, they can be scarce on a southwester, the Black-capped Petrels were hungry and feeding in our slick on the chum.  We decided to stop and drift with the chum for a bit and these magnificent "winged runners" came right in (George Armistead). 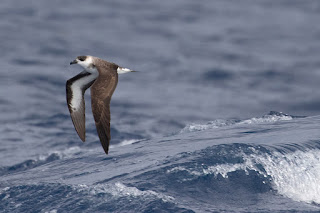 Participants were treated not only to the Black-cappeds feeding right in front of us and showing off their bicolored feet (Kate Sutherland, below), but also to their calls!  George Armistead heard some calls he didn't recognize while we were on the drift and sure enough, it was the Black-cappeds calling as they squabbled over pieces of chum.  What a treat to be with these birds in their element, zipping effortlessly around us while we are gripping the rails, dropping elegantly down to pluck a piece of food from the sea's surface, generally doing what they do out there while we get to watch.  It was awesome, though I could be a bit biased! 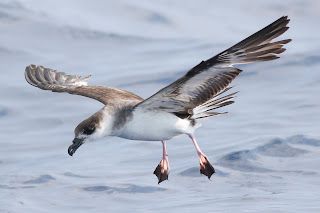 Pomarine and Long-tailed Jaegers both visited the slick in the late morning and at least six or seven Black-cappeds were seen "escorting" the Pom from the slick.  Yes, we have bouncers here sometimes around the Stormy Petrel II and they are not fond of skuas or jaegers.  Perhaps they want the right to steal from the birds in our slick themselves as some have imagined, or maybe they just don't enjoy the proximity of birds that are a threat to them.  Or maybe it is none of the above, since we're not Black-cappeds all we can do is take notes and imagine what the purpose may be.  They could just be exhibiting their mastery of the skies to these seemingly less skilled seabirds, who knows? (Kate Sutherland) 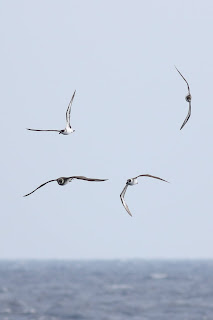 A bit before noontime, on our inshore tack with the sun on the stern, I noticed a grayish looking bird coming toward the slick from the port side.  It didn't come very close and stayed low as it crossed astern showing a white belly occasionally.  I thought at first it would be a Fea's Petrel with the color of the dorsal surface, and took a few photos once it became obvious it was going to blow right past us like our Trindade Petrel yesterday.  It turned out to be a light morph Trindade Petrel!  Perhaps the reflection of the sun on its feathers gave it that sheen suggestive of a Fea's Petrel, who knows?  But a handful of participants saw it before it flew away.  (record shot Kate Sutherland) 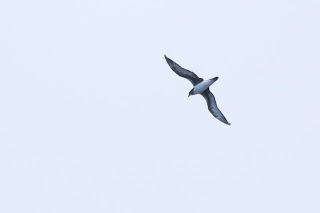 It was a salty day out there with the wind picking up a bit earlier than forecast and the Gulf Stream current falling out a bit...so we did our best!  Thank you to everyone who joined us out there, and a big thanks to George Armistead who also contributed photos for this post, and Andrew Rapp for helping Brian and I lead the trip today.
Species List for May 28, 2021
Trindade Petrel - 1 light morph
Black-capped Petrel - 42 to 46
Cory's Shearwater - 35
Great Shearwater - 5 to 6
Sooty Shearwater - 16
Audubon's Shearwater - 25
Wilson's Storm-Petrel - 75 to 80
Leach's Storm-Petrel - 4
Band-rumped Storm-Petrel - 2
Band-rumped / Leach's - 2
Sooty Tern - 1
Pomarine Jaeger - 2
Long-tailed Jaeger - 1
Loggerhead Turtle - 1
A few more dark morph individuals by George Armistead 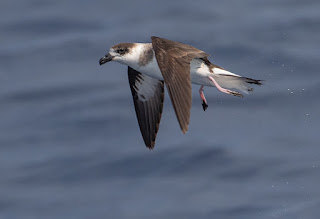 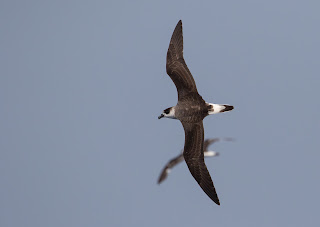 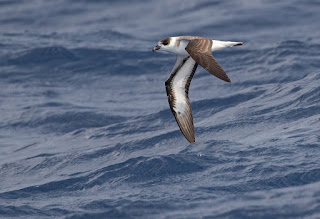 And some feeding in the slick by Kate Sutherland 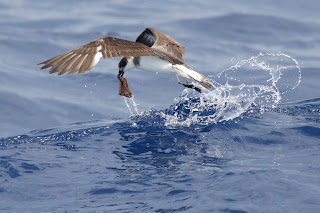 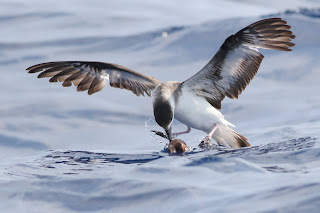 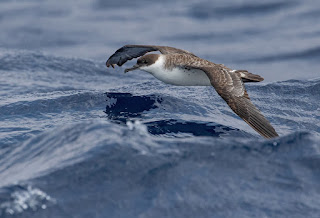 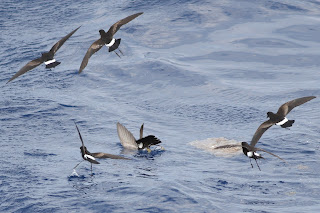 At first I thought this Band-rumped was going to be one of our "little" Band-rumpeds, but it has a couple of old primaries indicating a winter breeder (Kate Sutherland) 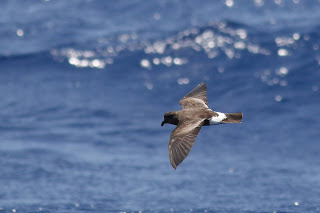 Our Long-tailed Jaeger by Kate Sutherland 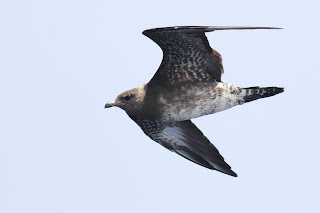 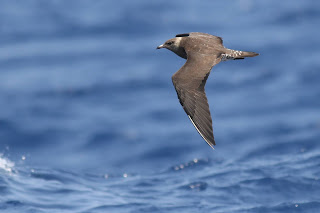 Posted by Kate Sutherland at 3:19 PM