East winds always make us think about species that could be out in the deep.  It blew pretty hard from the east last night so there was some swell out there as we headed offshore this morning and the wind was still blowing a bit from the east southeast.  There was a small flight of Sooty Shearwaters just outside of the inlet and South Polar Skuas were also in the nearshore waters with two individuals flying up behind us to investigate the Stormy Petrel II!  So lucky right off the bat!  (Kate Sutherland) 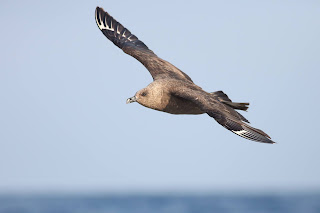 I was hoping we'd have a nice flight of Leach's Storm-Petrels and we did see at least two on our way to the shelf break...not quite what I was thinking but nice to see.  We found another four over the course of the day and with the size of the swells, we certainly could have missed a few.  A drift with the chum began our time in the deeper water offshore and we had a nice storm-petrel flock gather with both light and dark form Black-capped Petrels visiting the slick plus at least one Band-rumped and one Leach's.  (Band-rumped photo Kate Sutherland) 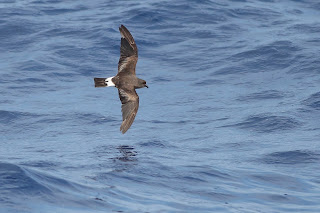 The inshore tack was very successful and we had close to 300 Wilson's in the slick at once with Black-cappeds and Cory's types flying through in addition to a handful of larger stormies that would show well periodically.  We found one spot that had some jaegers and before long we had at least two Poms, one Parasitic, and one Long-tailed working our flock!  What a treat to have all three and get to study them right there!  A couple of Leach's made some nice passes as well and just before we got back in to the shelf a Great Shearwater joined our slick.  Then we had some Red-necked Phalaropes on the way inshore - pretty nice way to wrap up the day.
The Gulf Stream current was running a little less than 3 knots where we were in the deeper water and there was some scattered Sargassum.  The temperature was in the high 70s and for the most part the water looked nice and blue.  As we moved inshore in the afternoon we were treated to a nice blue / green color change with more organized patches of sargassum - pretty cool to see and the temperature difference was at least 5 to 7 degrees Fahrenheit.
Thanks so everyone who joined us out there today and thank you also to our leaders, Ed Corey and Andrew Rapp, for helping us lead the trip!  Ed also contributed some photos for the blog tonight.  Tomorrow they will be with us again and we'll have another guest leader joining, George Armistead!
Species List for May 25, 2021
Black-capped Petrel - 28 to 32
Cory's Shearwater - 33 to 34
Scopoli's Shearwater - 2
Cory's / Scopoli's Shearwater - 7
Great Shearwater - 1
Sooty Shearwater - 36
Audubon's Shearwater - 8 to 10
Wilson's Storm-Petrel - 300 to 350
Leach's Storm-Petrel - 6
Band-rumped Storm-Petrel - 9 to 11
Red-necked Phalarope - 7
South Polar Skua - 2
Pomarine Jaeger - 4
Parasitic Jaeger - 1
Long-tailed Jaeger - 6
Arctic Tern - 2
Common Tern - 2
Bottlenose Dolphin (offshore population) - 15 to 20
Hammerhead shark (likely scalloped) - 2
Black-capped Petrels - intermediate individual by Ed Corey (top) and pale individual by Kate Sutherland (bottom) 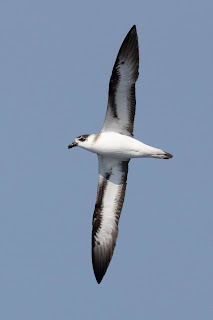 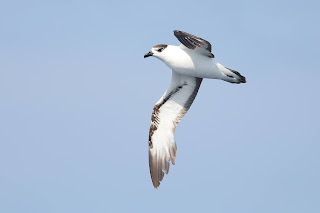 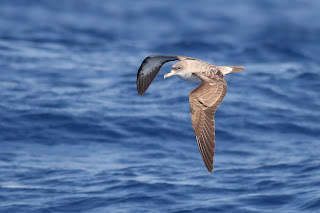 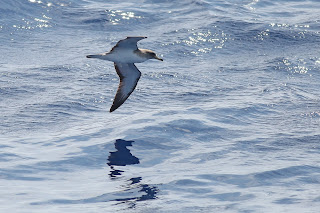 Our single Great Shearwater from today by Ed Corey 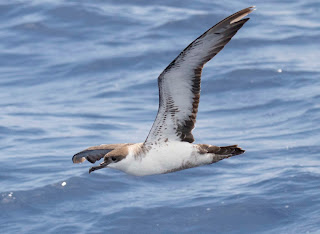 Our Wilson's Storm-Petrels were super excited about the chum on our drift this morning!  (Kate top image, Ed Corey bottom image) 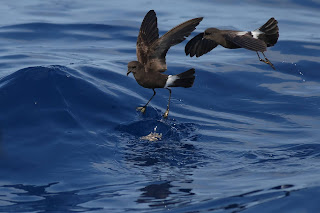 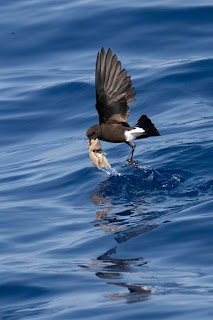 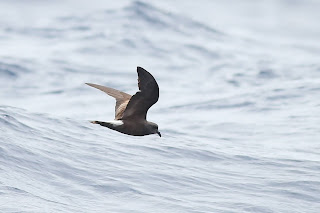 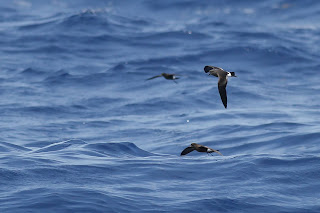 One of our Pomarine Jaegers (Ed Corey) 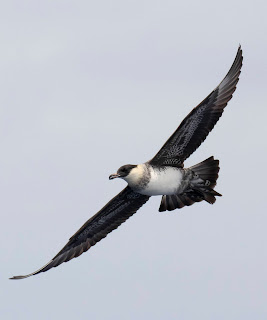 And a nice shot of our offshore Bottlenose Dolphins (Ed Corey) 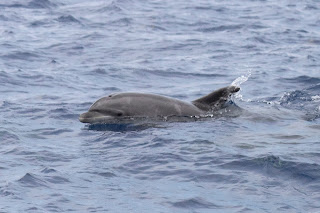 Posted by Kate Sutherland at 9:06 PM