Wind and waves combined to give us the best kind of early spring birding adventure on our recent trips!  Friday we had northeasterly winds and Saturday more northerly winds, but both days certainly had enough breeze to keep the birds flying. Friday morning there were some Sooty Shearwaters outside of the inlet and we found a nice feeding group of Atlantic Cory's Shearwaters inshore of the shelf break, they also had some Wilson's Storm-Petrels and even a couple of Black-cappeds right there. A flock of white terns went by in the harsh light that looked good for Arctic Terns, but we didn't have a chance to see them well enough to be certain. We made it to the shelf break just before 0830 and started to chum, just an hour later we already had a nice following! Excellent views of Black-capped Petrels and they really put on a show chasing a dark morph Pomarine Jaeger that followed us for a couple of hours (photo Kate Sutherland). 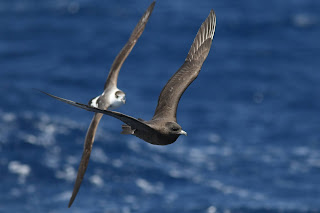 Wilson's Storm-Petrels were incredibly cooperative coming to the chum and flying right by the stern of the boat for everyone to see and study. This helped for when we had Leach's Storm-Petrel near the boat later in the day. Another light morph Pomarine Jaeger followed us for a bit and we also had our first Long-tailed Jaeger of the year on Friday - with a nice, long tail - what a treat! (photo Kate Sutherland) 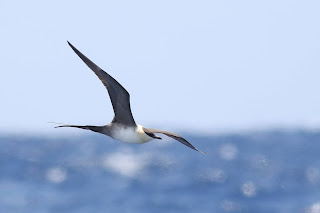 Just after 1100 a dark Trindade Petrel came screaming by the boat with the wind! We got the word out and while it was a brief visit, everyone aboard was able to see the bird well. Less than two hours later another, light morph Trindade Petrel visited the slick but did not make a very close pass, nor did it turn and give us another chance, regardless a number of participants laid eyes on that bird as well! These gadfly petrels tend to be around when we have some easterly winds, so we were hoping we might find one out there (photo Kate Sutherland). 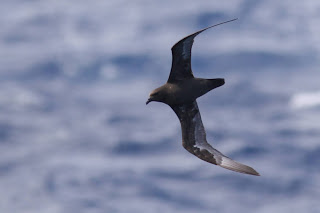 Saturday morning we didn't find as much life inshore of the shelf break and the seas were a bit larger than forecast, but the birds were responsive to the chum once we got out there and we had an awesome following for most of the day! Our most notable guest in the slick was a Manx Shearwater that stayed with us for a couple of hours diving behind the boat and making some really nice passes for us (photo Kate Sutherland). 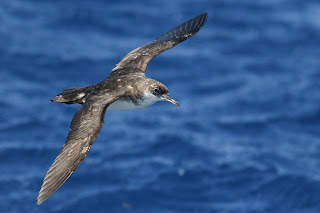 We didn't see many Audubon's over the course of the two days for a nice comparison, but we did have a couple so that participants could see the differences between the two small black and white shearwaters. Black-capped Petrels and Wilson's Storm-Petrels were again our main followers in the slick and we had nice views of Leach's Storm-Petrel and Atlantic Cory's Shearwaters. No jaegers joined us in the slick on Saturday, but we did see the Black-cappeds gang up on a Pom in the distance behind us. Overall a great set of trips! A big thank you to Tennessee Ornithological Society for making these trips possible, we had scheduled a set for them in 2020 but the pandemic waylaid those plans! We're glad that most folks were able to join us for a set this year, and we had a few others sign up once we put the schedule out! Thank you to Chris Sloan and Andrew Rapp for helping us lead this trip and for contributing photos. A very special thank you to our guest leader this weekend, Hadoram Shirihai, who was able to get four days offshore with us during his visit to the US. The Black-capped Petrels put on quite a show for him!
Offshore Species List May 14 / 15
Trindade Petrel - 2 / 0
Black-capped Petrel - 48 to 50 / 63 to 63
Cory's Shearwater - 19 / 10 to 12
Sooty Shearwater - 7 / 7
Manx Shearwater - 1 / 2 to 3
Audubon's Shearwater - 5 / 6
Wilson's Storm-Petrel - 300 to 350 / 260 to 300
Leach's Storm-Petrel - 3 / 3
Band-rumped Storm-Petrel - 1 / 0
Red-necked Phalarope - 10 / 2
Pomarine Jaeger - 5 / 1
Long-tailed Jaeger - 1 / 0
Common Tern - 20 / 0
Northern Gannet - 0 / 2
Barn Swallow - 1 / 0
Another view of the first, dark morph Trindade Petrel (Kate Sutherland) 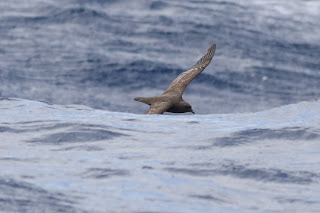 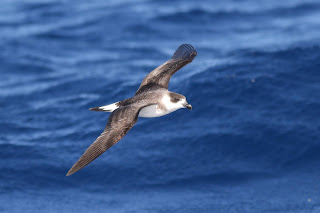 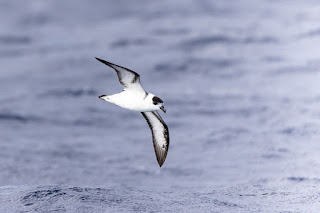 One of the Cory's Shearwaters we saw - all of them looked to be Atlantic Cory's like the one pictured here.  These birds do not show any white in the under primaries.  (Kate Sutherland) 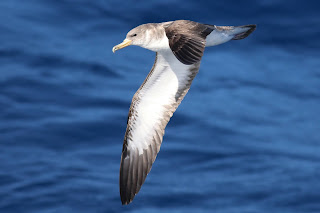 Sooty Shearwaters are just starting to show up!  (Chris Sloan) 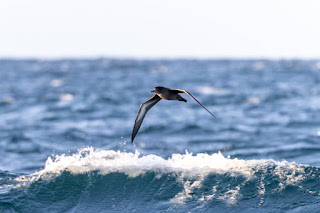 While Audubon's Shearwaters were not easy to see with the seas we had on Friday and Saturday, we did have very obliging Manx Shearwaters on both trips! (Kate Sutherland) Friday top, Saturday bottom 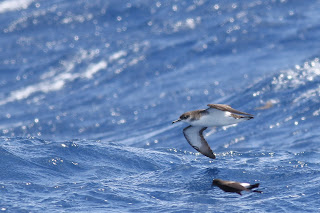 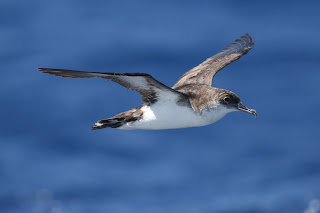 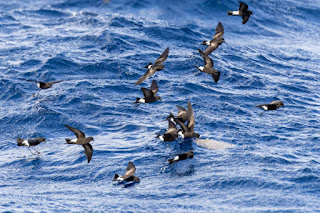 A couple of close-ups (Kate Sutherland) 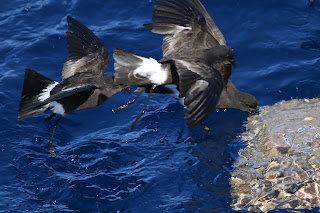 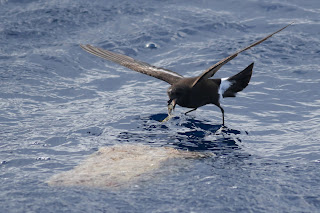 We had at least one Leach's Storm Petrel that came in well to the chum on Saturday's trip seen above the Wilson's here. (Kate Sutherland) 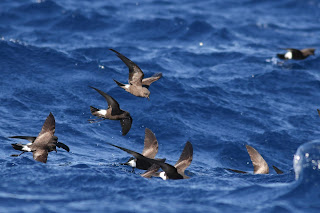 While we had other Pomarine Jaegers that visited us on Friday, this dark morph individual was most obliging and the Black-cappeds helped keep it close to the boat!  (top photo by Chris Sloan, others by Kate Sutherland) 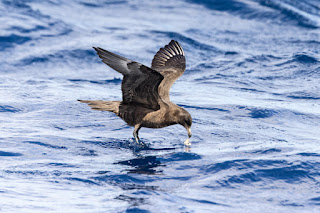 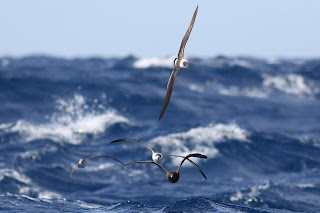 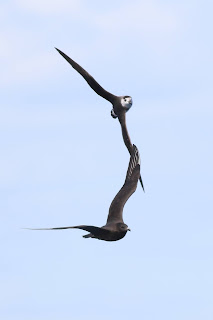 Posted by Kate Sutherland at 10:02 PM