The morning began in the rain, our pre-departure briefing was given under an overhang but by the time it was over, the heaviest of the rain had moved on.  There were a few more showers as we headed offshore, but the seas were a bit calmer than the past three days so overall our ride out was quite nice.  A Pomarine Jaeger even came to check us out as we were running before moving off to the east.  There weren’t many birds around the shelf break so we kept running out to 100 fathoms (600 feet) and when we reached it we found a beautiful condition with light Gulf Stream current and scattered Sargassum.  The first bird of the day was a Black-capped Petrel, but then they were scarce until the latter part of the day (photo Kate Sutherland). 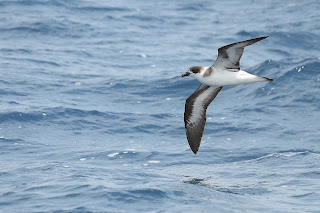 We started seeing Audubon’s Shearwaters right about there as well, on the water feeding in and around the Sargassum…likely eating some of the creatures we just viewed yesterday when we dipped some of this floating brown algae.  Little did we know they would be a feature today with over 100 tallied!  It was awesome to see so many of these small black and white shearwaters, they haven’t been around so far this spring so this was the first push we've seen up here (photo Kate Sutherland). 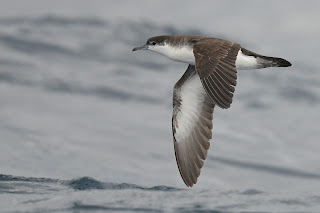 In the afternoon the wind shifted to the north and picked up to about 18 knots, with this the birding picked up as well.  Our slick’s customers grew in number and we were treated to the acrobatic flight of Black-cappeds, Atlantic Cory’s, Audubon’s, Wilson’s and Band-rumpeds as they came to check out the slick, then the boat, and wheeled away.  Just before reaching the shelf break we were treated to a new species for the Blitz: a gorgeous Sooty Shearwater came right up the slick and circled the boat before heading away (photo Kate Sutherland). 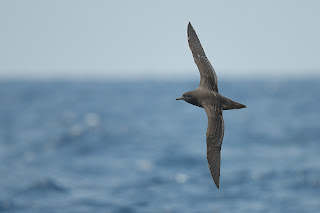 Tonight the winds will shift to the northeast and that is what’s forecast for tomorrow.  We’ll see if we can add some more species to the list then!
Thanks so much to everyone who joined us out there today!  And thank you to Peter Flood and Jason Denesevich for helping us lead the trip.  Today was Jason’s last trip with us, so another big thank you to him for his help over the past four days.
Species List for May 23, 2022
Red-necked Phalarope - 8
Pomarine Jaeger - 3
Common Tern - 1
Wilson’s Storm-Petrel - 182 to 183
Band-rumped Storm-Petrel - 7 to 9
Black-capped Petrel - 28 to 32
Atlantic Cory’s Shearwater - 10
Cory’s / Scopoli’s - 11
Sooty Shearwater - 1
Audubon’s Shearwater - 104 to 112
Barn Swallow - 1
Pilot Whales (likely Short-finned) - 8 to 10
Blackfish species - 5 to 7
Bottlenose Dolphins (offshore population) - 5 to 6
Portuguese Man of War - 1
A nice white-faced Black-capped Petrel (Kate Sutherland) 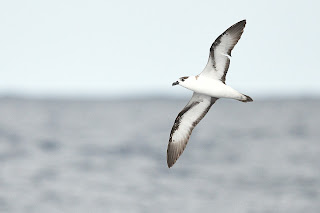 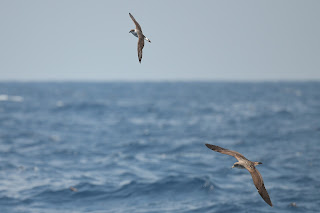 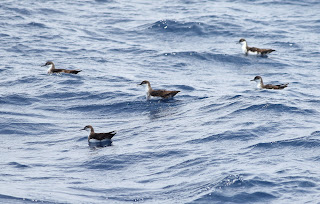 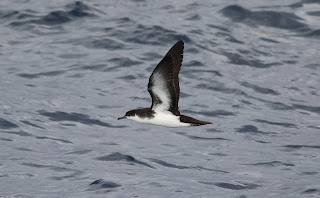 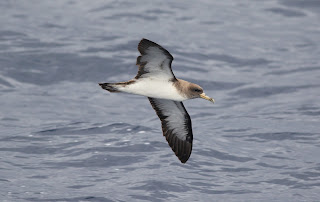 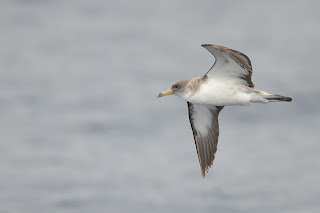 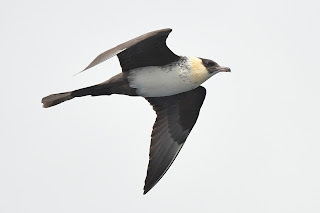 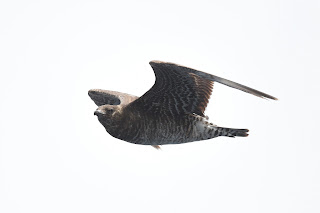 One of the Pilot Whales we saw out there (Peter Flood) 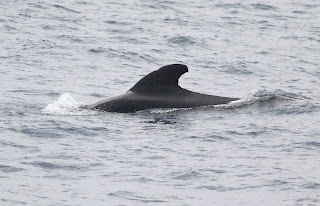 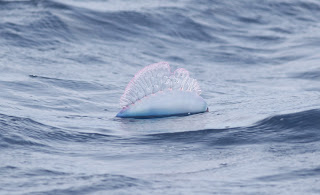 Posted by Kate Sutherland at 8:20 PM