Well, some days we just find the usual suspects.  And that's more likely when the winds are the same for a few days in a row.  Today was day three of a south wester and while it was a bit calmer out there today than it was yesterday, the birds were not as cooperative.  We did have some attentive Black-capped Petrels which for me pretty much makes the day!  Here is one I photographed today: 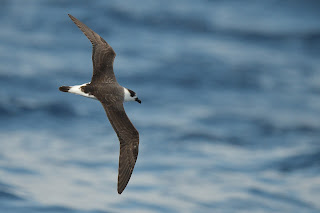 Audubon's Shearwaters were out there in the Sargassum, which was nicely lined up in the Gulf Stream offshore.  They tend to be associated with this floating brown algae and will feed on small fishes and other creatures that utilize the Sargassum for cover.  Unfortunately they didn't show well, but perhaps tomorrow with some calmer conditions will be better!  We did have some nice views of Atlantic Cory's Shearwaters passing by (photo by Peter Flood) 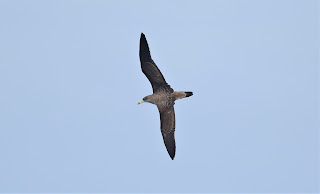 and the Wilson's Storm-Petrels were our faithful followers for our time beyond the shelf break!
As we motored back inshore we found some nice patches of Sargassum and took a few minutes to dip some and see what we could find with it!  We were lucky to find at least three very small Sargassum Pipefish, a few Sargassum Swimming Crabs, and some small shrimp in the genus Leander.  Participant Chris Thomas took a few videos that you can find at the bottom of the post! *to be added in the next few days!
Thanks to everyone who joined us out there and a big thank you to Peter Flood and Jason Denesevich for helping Brian and I lead the trip today!
Species List for May 21, 2022
Laughing Gull - 1
Common Tern - 3
Wilson's Storm-Petrel - 66 to 71
Leach's Storm-Petrel - 1
Band-rumped Storm-Petrel - 2 to 3
Black-capped Petrel - 34 to 38
Atlantic Cory's Shearwater - 2
Cory's / Scopoli's Shearwater - 3
Audubon's Shearwater - 7
Atlantic Spotted Dolphin - 8 to 10
Portuguese Man of War - 1
A few of the Black-cappeds we saw today were already molting heavily (Kate Sutherland) 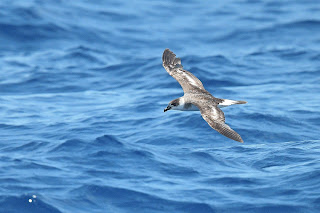 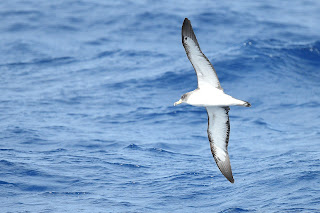 It has been really nice to see Leach's so often this spring!  Here is a record shot of one we saw today! 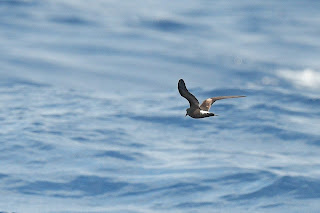 And here is one of our Band-rumpeds from Jason Denesevich 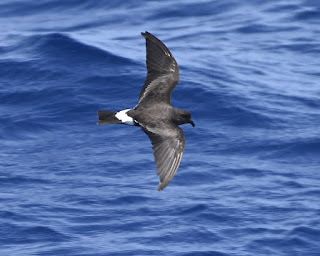 And a few videos by participant Chris Thomas featuring some of our Sargassum creatures will be added as soon as my internet is back up and functioning!  (21 May 2022 - Kate)
Posted by Kate Sutherland at 8:41 PM