The wind had a westerly component overnight and was light and variable this morning, there was some swell from the east but it was not really high enough to bring birds in with it.  Fortunately for us there was some life on the shelf and we spent some extra time in there this morning!  It began when some shearwaters were spotted in the distance up ahead...then some dolphins popped up on the starboard side.  When I ran up to check the species, it turned out that we were in a nice pod of Rough-toothed Dolphins (Steno bredanensis)!! (Peter Flood) 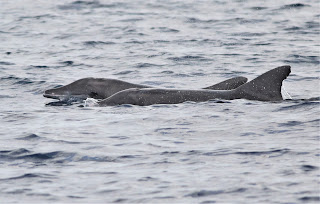 I don't think we have seen them here for over six or seven years and we certainly have not had ones as cooperative as these for a long time!!  We spent at least ten or fifteen minutes cruising around with them under the bow and nearby, plenty of time for our participants to study how they are different from other species we've seen over the past few days!  As we were watching the Stenos a tropicbird was spotted up ahead near a charter boat!!  It never came it well for us, but photos showed a White-tailed.  By then the shearwaters were nearby and we picked up all six species there on the shelf (Scopoli's, Cory's, Great, Sooty, Manx (Kate Sutherland), and Audubon's). 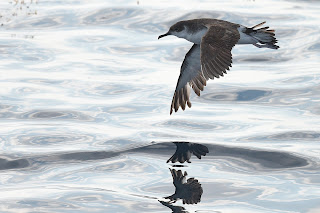 Phew.  What a start to the day and we weren't even to the shelf break yet!
Less than an hour after crossing the break we had a Fea's Petrel fly in to check us out!  It made a nice pass and everyone saw it well! (Ed Corey) 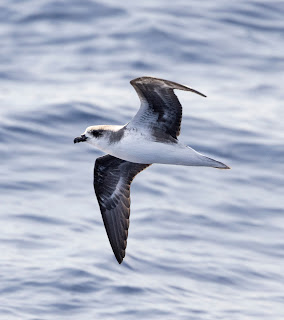 Less than an hour later some beaked whales surfaced right next to the boat, three Gervais Beaked Whales (Mesoplodon europaeus)!!  These animals must have just surfaced from a longer dive because they were very cooperative and paid the boat no mind as they swam around and under us, surfacing nearby a number of times. (Kate Sutherland) 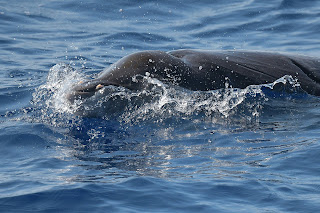 One of the species that we had not seen yet for the Blitz was Bridled Tern, participant Karyl Gabriel spotted one just past the shelf break and then another later in the morning!  The views were not close, but we were able to identify them.  Black-capped Petrels were scarce again today but we had a number on the water in the morning and got some nice looks at them taking off!  Around that same time a Parasitic Jaeger was seen harassing some Black-cappeds on the water and chasing them around - minutes later it came by with angry gadfly petrels on its tail! (Kate Sutherland) 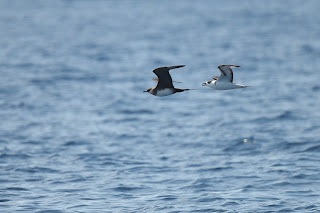 It wasn't worried however, and soon started chasing Wilson's way back in the slick.  The slick was very productive today for Band-rumped Storm-Petrels and we saw a number of them well plus had a quick view of a Leach's in the slick.  We began our inshore tack just after 1130 and Brian put out the "tropicbird teaser" like he did yesterday.  It wasn't ten minutes the shout went out for White-tailed Tropicbird!!  This super cooperative individual came in and circled the boat a few times before heading away. (Ed Corey) 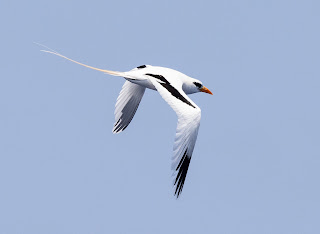 WOW.  It was just an incredible and full day!  Check out our list below to get the big picture 😊
Thank you so much everyone!!  We are glad to have such great birders join us for these trips and are glad we could get so many of you offshore this spring.  Thank you to our leaders for today as well, Todd McGrath, Chris Sloan, Peter Flood, and Ed Corey all helped to make this day a success!
Species List for 31 May 2022
Pomarine Jaeger - 3
Parasitic Jaeger - 2
Bridled Tern - 2
Arctic Tern - 5
Common / Arctic Tern - 18
White-tailed Tropicbird - 2
Wilson's Storm-Petrel - 124 to 131
Leach's Storm-Petrel - 1
Band-rumped Storm-Petrel - 7 to 9
Fea's Petrel (likely Desertas) - 1
Black-capped Petrel - 33
Scopoli's Shearwater - 6 to 8
Cory's Shearwater - 18
Cory's / Scopoli's - 158
Great Shearwater - 32 to 36
Sooty Shearwater - 14 to 16
Manx Shearwater - 2
Audubon's Shearwater - 72
Gervais' Beaked Whale - 3
Rough-toothed Dolphin - 40 to 50
Offshore Bottlenose Dolphin - 5
Loggerhead Turtle - 1
Portuguese Man of War - 2
A few more photos of the Rough-toothed Dolphins - top with a young one - Kate Sutherland, bottom two Peter Flood 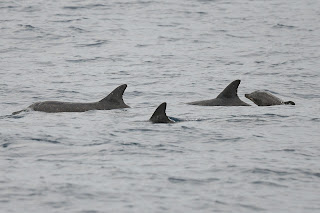 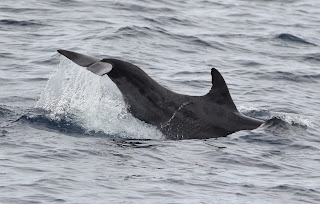 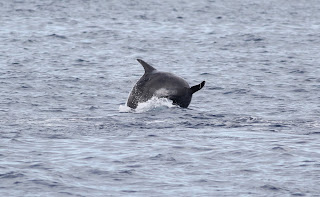 A dorsal image of the Fea's Petrel - Kate Sutherland 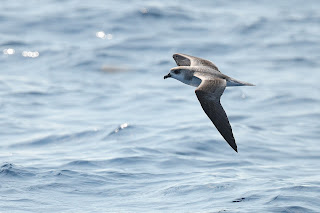 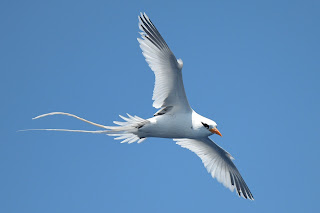 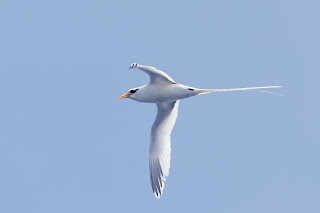 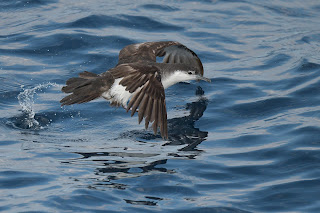 And we found a feeding group of shearwaters at the end of the day as well!  There was a bit of a brawl - Kate Sutherland top, the victor by Todd McGrath bottom 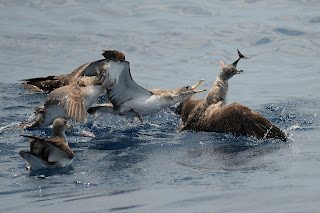 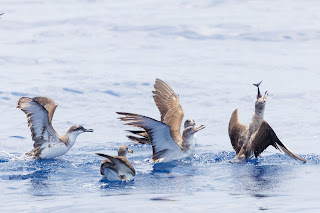 At one point a Pomarine Jaeger even got involved!  Kate Sutherland 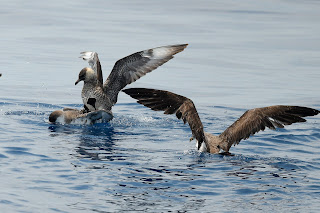 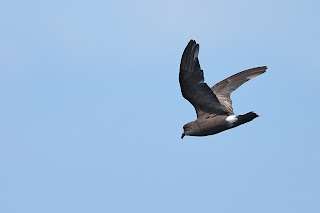 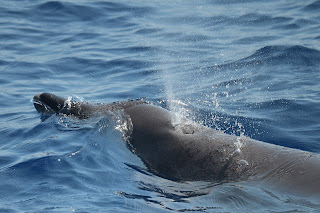 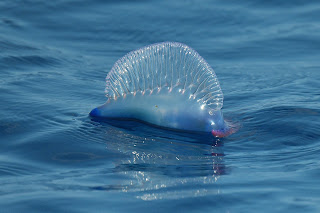 And we say farewell...for a few days at least!!  An odd spot midget on the way in... - Kate Sutherland 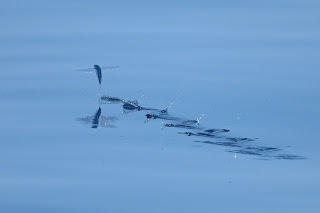