Mid-May can be a great time for seabirds offshore from Hatteras, however the weather can be a bit unpredictable.  So as we approached our Friday May 13th trip date we were just finishing with a nor'easter that sat offshore here and wreaked a bit of havoc on the highway to Hatteras village...luckily the winds and seas subsided early Thursday morning and the highway was open for business by midday.  A large weather system like that can make for some interesting birding in the days that follow, if we can get out there.  We were lucky on Friday and despite dense fog on the way to the ocean, we made it offshore and conditions were excellent for birding.  As were the conditions the following day when we had some down current (an eddy in the Gulf Stream that is moving the opposite direction from the usual north easterly flow) and easterly wind.  By Sunday conditions were much calmer and skies clear - each day was unique.  For this reason we typically recommend taking more that one trip with us when you're here, availability permitting!
The definite star of the weekend was the European Storm-Petrel we had Saturday morning less than an hour after crossing the shelf break!  This bird was spotted by myself and Jamie Adams simultaneously as it darted across the stern flashing its diagnostic white bar under the wings!!  After some pandemonium as we worked through the excitement of having a look at this species that hasn't been seen offshore here since June 1, 2019, we got people situated and did our best to call out the flight direction and identification criteria as it moved in a flock of Wilson's Storm-Petrels.  Hopefully most everyone saw it during its brief visit in challenging seas - by the time I took a minute to photograph it, it was not close and also flying away...but even so, this image with the dark upper wing and thin pale margin to the secondary coverts in addition to the short legs, is enough (Kate Sutherland) to identify it! 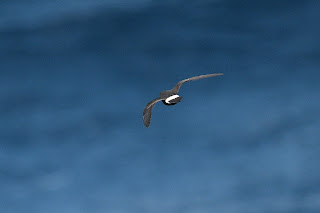 Later that same day we had a super cooperative Fea's Petrel come to investigate the slick after being glimpsed at a distance for some time.  This is the third sighting of this species for the spring, and it looked likely to be a Deserta's Petrel, one of the species in the Fea's Petrel complex (the others being Cape Verde Petrel and Zino's Petrel) and the one we think is most likely seen offshore from Hatteras.  We had some rain on Saturday, but that didn't slow or deter this bird from coming to check out the slick!  There were excellent views for all aboard (Kate Sutherland). 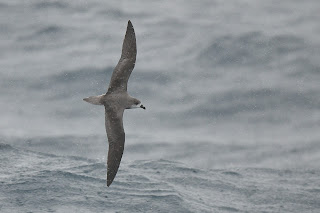 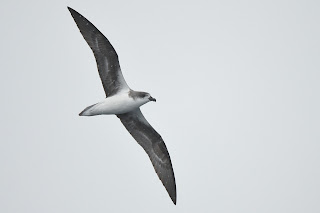 Friday we were treated to a gorgeous, adult White-tailed Tropicbird who was also super cooperative and interested in our chum!  It came to the boat and flew around multiple times at close range, swooping down to investigate us in the stern.  Looking over my photos as we headed back to the dock that afternoon I realized the bird had a band on its left leg!  A quick message to Jeremy Maderios, Bermuda's senior terrestrial conservation officer and Keeper of Cahows and Longtails there, confirmed that he does band chicks fledged from Bermuda on the left leg to track that they are a known age / location individual.  This bird was banded by him as a chick and is the first we have seen offshore here with a band!  Since 2006 Jeremy has banded about 1,700 White-tailed Tropicbird (Bermuda Longtail) chicks.  (top photo Bob Fogg, lower showing band by Kate Sutherland) 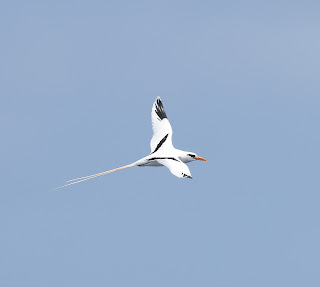 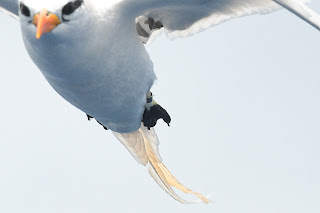 To top off the three day set we had a Brown Booby on Sunday's trip that flew by, showing well, but not coming in very close.  (Bob Fogg) 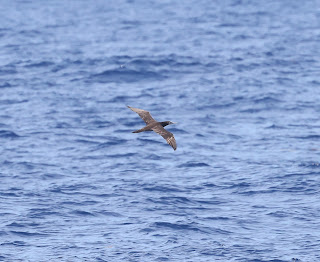 In addition to these encounters we had excellent luck with our Gulf Stream specialty the Black-capped Petrel seeing multiple individuals each trip and all days had some close passes.  While we didn't find many, we did have Audubon's Shearwaters on each trip, and another species we hope to find in the warm water, Band-rumped Storm-Petrel, made an appearance each day as well (Kate Sutherland). 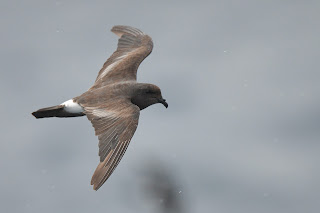 Atlantic Cory's Shearwaters are starting to show up, and the storm-petrels were just incredible with hundreds of Wilson's Storm-Petrels following us each day and multiple Leach's Storm-Petrels seen with them.  Pomarine Jaegers loyally stayed with us eating bits of fish as we motored, Parasitic Jaegers were seen best on Friday but we had at least one each day, and a Long-tailed made a pass on Saturday's trip.  Arctic Terns showed well on all three trips coming in to the boat and feeding for some time on chum before moving on.  A highlight for us was seeing both species of phalarope, sometimes together, on each trip!  There are still a few Red Phalaropes around and we had excellent views of this larger species on the water each day with the more numerous Red-necked Phalaropes also showing well!  Overall it was a great time out there even with some larger seas, fog, and rain making birding a challenge!
Thanks so much to everyone who joined us making these mid-May trips possible!  A huge thank you also to Bob Fogg for joining us as a leader on all three trips and sharing his photos with us, Matthew Withrow who also helped on all three days, Matt Jansen who joined us Saturday, and Sarah Toner who joined us Sunday.  We couldn't do it without them!  The Spring Blitz begins on Friday...these reports will be brief, but we'll keep you posted! 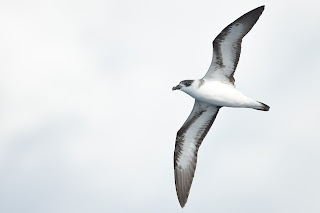 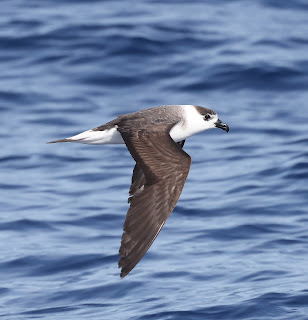 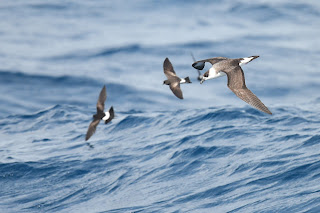 Fea's (Deserta's) Petrel getting after one of our Pomarine Jaegers!  (Kate Sutherland) 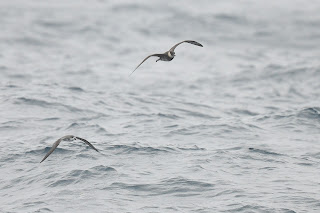 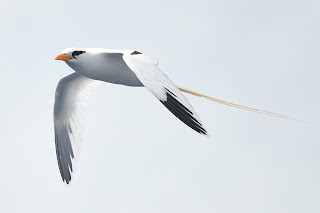 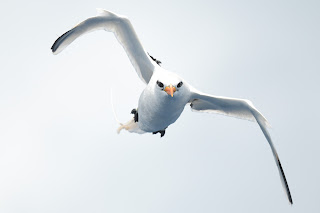 And another image of the Brown Booby (Bob Fogg) 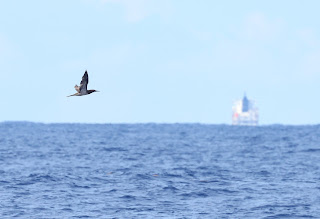 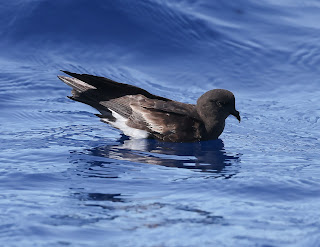 And a gorgeous seascape with Wilson's and Black-capped Petrel, also by Bob Fogg

A couple Wilson's feeding on chum as we tried to lure the Euro back to us! (Kate Sutherland) 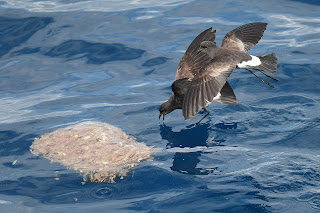 The blue / green color change on Friday with a Wilson's Storm Petrel, green water obviously in the foreground! (Kate Sutherland) 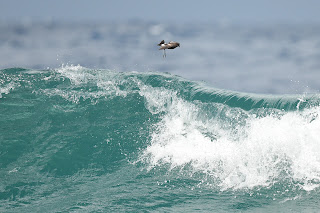 Wilson's Storm-Petrel with a car carrier in the background on Saturday. (Kate Sutherland) 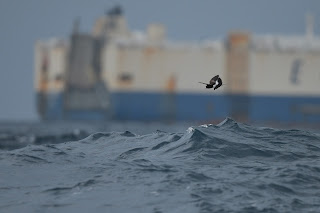 We didn't find any Scopoli's Shearwaters out there, but we had some really nice views of the Atlantic Cory's! (Kate Sutherland) 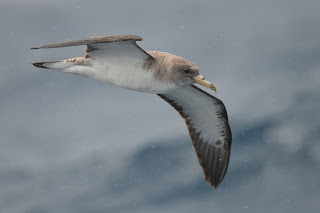 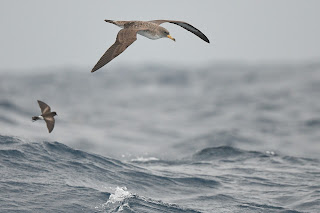 Pomarine Jaegers were super cooperative as I mentioned in the trip report, here are a few images from the three day set! (top Bob Fogg, bottom two Kate Sutherland) 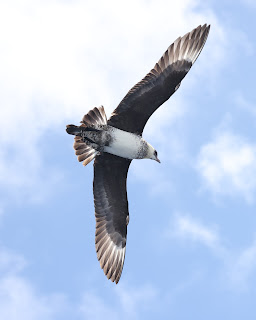 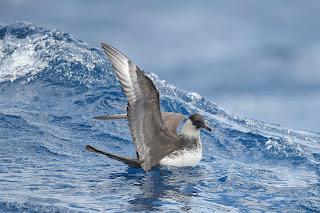 Eating some chum close to the stern! 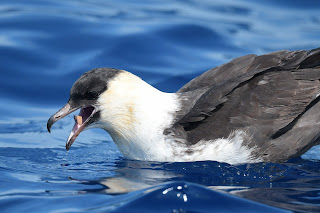 Parasitic Jaeger (Bob Fogg), this top individual was a cooperative one from Friday's trip and the bottom is all we sometimes get from Sunday's trip! 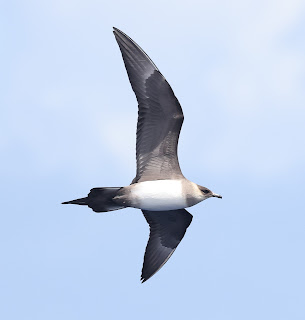 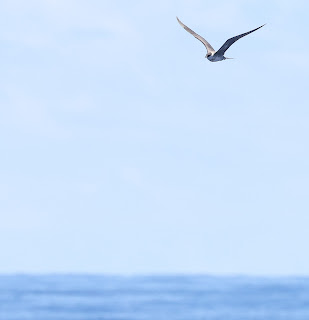 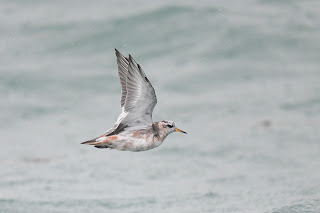 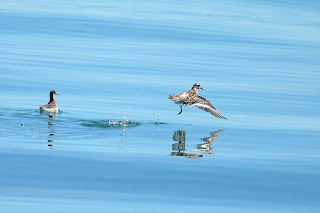 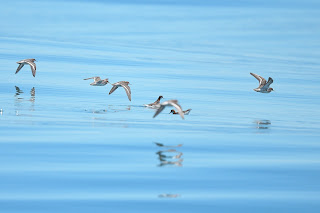 And finally one of the Portuguese Man of Wars we saw on Sunday!  (Kate Sutherland) 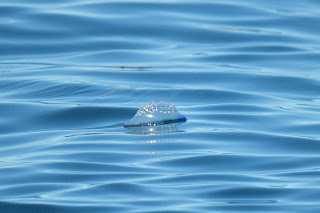 Posted by Kate Sutherland at 3:56 PM