Wind was in the forecast for today and we did find a bit of it offshore!  East winds were expected, but we had southeasterly wind until midday, when it shifted to the east and picked up a few notches.  Birds were flying, and we had nice, aerial views of Audubon's Shearwaters way up in the sky as they flew by at high rates of speed;  Cory's Shearwaters were following suit.  The highlights of the day for many aboard were the Black-capped Petrels and Band-rumped Storm-Petrels.  Black-cappeds made some very close passes, and everyone had time to study naked-eye Band-rumpeds in addition to observing them at a distance in the slick as we travelled.  Leach's Storm-Petrels made a few brief appearances which were much appreciated, but decent views were challenging in the larger seas.  Pomarine Jaegers were seen not only on the way out in the morning, but also in the slick feeding close to the stern, and again on the way in this afternoon.  Wilson's Storm-Petrels were very cooperative (as usual when fed) and followed us arcing high in the air all day.  Photos today courtesy of leader Bob Fogg, thanks! 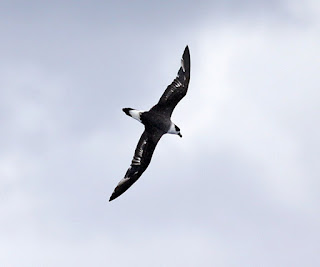 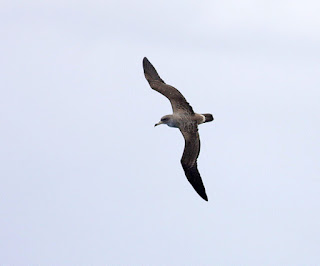 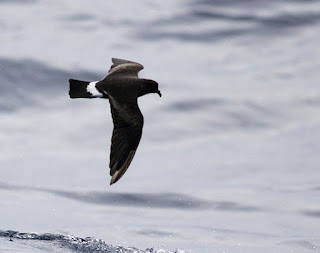