As the sun rose this morning we were heading to Hatteras Inlet, eager to see what we might encounter today!  Winds were light from the south as we headed offshore and the satellite image suggested that we might find the nice blue Gulf Stream water today! The first temperature break held some ugly looking water and the smallest bit of sargassum...as we continued offshore the temperature gradually rose and we finally found some nicer water heralded by flyingfish (photo by Kate Sutherland) and Audubon's Shearwaters! 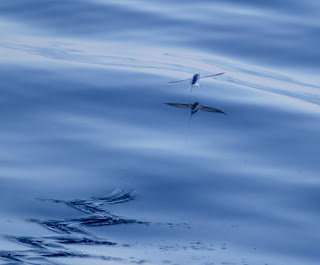 We spent a few minutes here and were rewarded with awesome views and photo ops of these petite black & white shearwaters feeding and scampering around on the slick calm water (photo by Peter Flood). 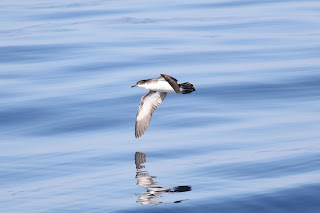 Gulf Stream current was a bit different today than yesterday, running more or less about 4 knots when we got out into the deep, but we found it!  Today the Gulf Stream belonged to the Black-capped Petrels, as it should!  Numbers far surpassed any of our previous trips this spring and the views were just breathtaking...some came into the slick while others were just efficiently cruising by in the wind that came up midday from the northeast (photo by Peter Flood). 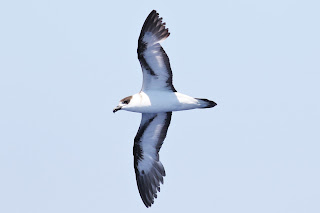 Cory's Shearwaters were cooperative, though we did not encounter any Scopoli's today, we did have a glimpse of a Great Shearwater right after slowing down, and a hungry Sooty Shearwater followed us, diving in the slick for quite some time midday!  Wilson's Storm-Petrels packed in behind us (photo by Peter Flood) 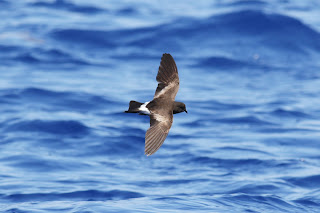 and the Band-rumped Storm-Petrel show from yesterday continued with close passes by the stern!  Pomarine Jaegers came in well to the boat, but the dark morph we had visit in the afternoon was particularly stunning (photo by Lev Frid)! 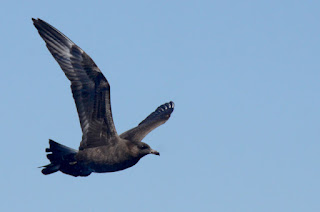 One of our Black-capped Petrels did not agree and buzzed the jaeger in short order, there was a collective gasp from those watching in the stern (photo by Peter Flood)! 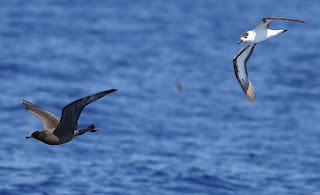 This behavior is known to occur with our scrappy gadflies and skuas, but it is not as regular with the Poms.  A Long-tailed Jaeger came purposefully flying towards the slick in the 1 o'clock period, pursuing a bird we could not see, and made a nice pass before moving on!  It was a gorgeous adult, or near adult, individual and our first for the spring!  Perhaps the east winds predicted for the next few days will bring birds like the Long-tailed in a bit so we can encounter more of these northbound species transiting to our east!  While our travels to the deep and back today did not turn up any rarities in the cetacean world, we did find some Bottlenose Dolphins and were treated to some bow riding Spotted Dolphins on the way in!  A big thank you to everyone who joined us today and to those who have been with us over the past week as well - we would not be out there without you!  Thank you also to our leaders, Peter Flood & Lev Frid - who have been plugging away with us since the beginning - Sea McKeon, and Jeff Lemons.  The weather looks interesting for the next few days, so hopefully it is conspiring to bring us some of the best seabirding yet this spring (and it's already been really good...)! 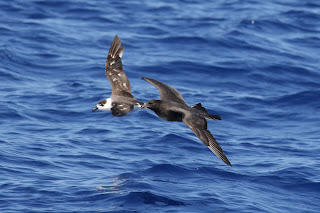 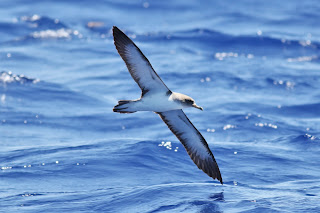 One of the Sooties (Peter Flood) 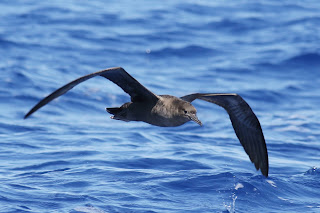 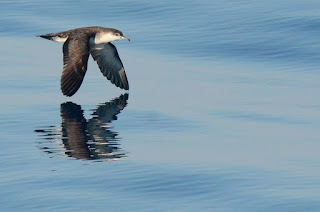 We were able to get the Wilson's Storm-Petrels to feed nicely today! (Peter Flood) 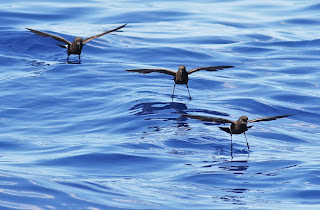 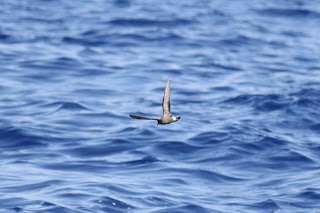 Brad Murphy, one of our participants, took this photo of a bow riding Atlantic Spotted Dolphin!  Pretty awesome perspective!  You can see how different the cooler, inshore water looks from the blue Gulf Stream waters! 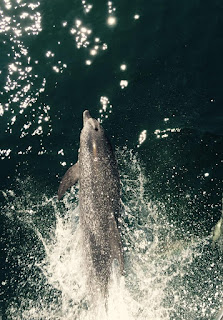