Today's trip was full, our first fully booked trip for the Blitz - but conditions were such that the boat seemed spacious!  It was our first day that was clear and fairly calm!  The winds were light from the west in the morning becoming south west as the day progressed.  Clear skies also meant we had a nice satellite image of what the Gulf Stream was doing - and the eddy continues...  It looked like we could, however, reach the hot blue water today - though it would mean really getting out there!  There were not many birds moving this morning on the way out like we saw yesterday, but there was a gradual change and we slowed ten minutes after 8.  Before 0900 we had already racked up five pelagic species!  Wilson's Storm-Petrels were slow to join us, but our Black-capped Petrels showed well right off the bat! 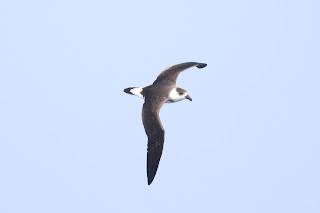 These tropical gadflies would pop up in the back of the slick and work their way right in, showing off their manuverability even with the winds blowing less than 10.  A surprise visit by a Pomarine Jaeger was a bonus, and Cory's & Audubon's Shearwaters were around as well.  The nine o'clock hour was also productive with a couple of Sooty Shearwaters coming in to visit the slick, and we finally had a nice look at a Band-rumped Storm-Petrel just after 10! 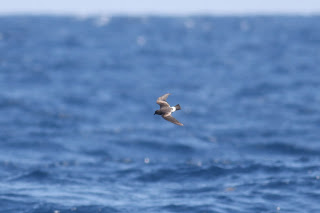 There was a gradual change as we headed to the east and finally intercepted the hot, fast, Gulf Stream water between 10:30 and 11:00.  The water temperature reached over 80 degrees Farenheit and we were moving at a blazing 4 to 5 knots over the bottom!  At one point, as we idled forward, the boat was actually moving backwards over the bottom with the current.  So we ended up about 41 miles from Hatteras inlet and in some of the deepest water we've been in for quite some time, 1500 fathoms (about 9,000 feet)!  Overall it was an awesome day to see our usual Gulf Stream specialties, Black-cappeds, Band-rumpeds, and Audubon's, well!  There was scattered grass out in the deep and we found cooperative Audubon's, 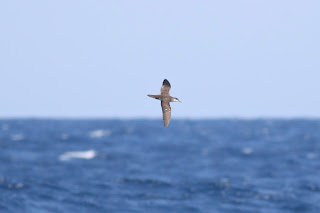 a huge contrast to the past few days when we have just had a fleeting glimpse of perhaps one individual!

We would like to thank everyone who joined us offshore today - we had a few participants who were visiting the waters offshore of Cape Hatteras for the first time and our ocean showed well for them!  Thank you also to Peter Flood, Lev Frid, Nate Swick, and Seabird McKeon for helping us lead the trip and spot the birds!  A big thanks to Peter also for providing photos for the blog post today!  We are full tomorrow, but still have space on Friday's trip...!

It was another perfect day for photographing Black-capped Petrels, like this white-faced individual 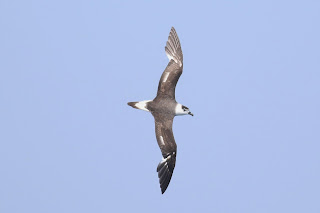 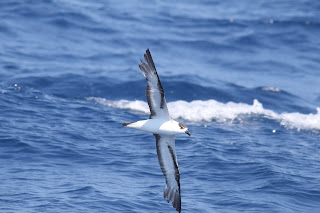 Or this dark-faced individual 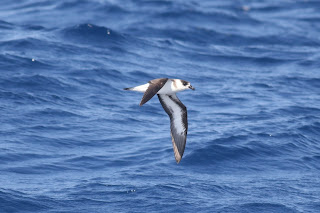 An Atlantic Cory's (borealis), we did not see any birds that were candidates for the nominate species, Scopoli's, today. 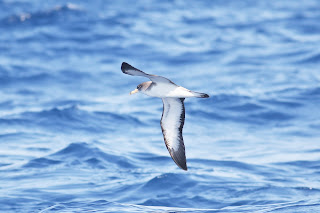